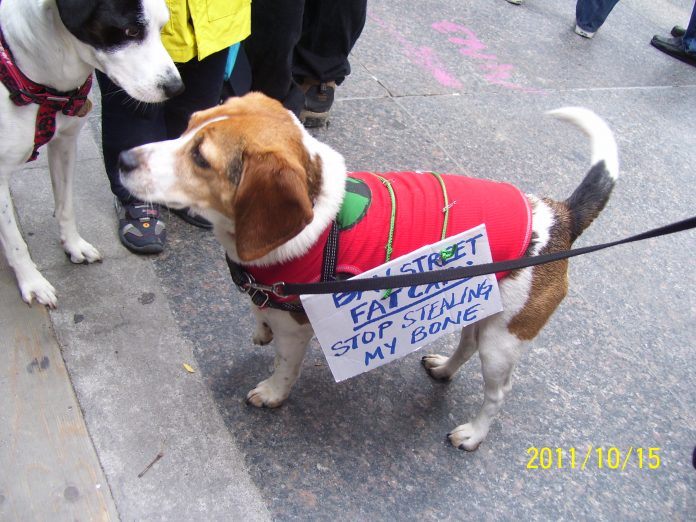 If it wasn’t so ridiculous or “radical”, or “extreme”, it might even be funny.

In 2010, Industry Canada allowed American-owned Caterpillar to bulldoze its way into London, Ontario to purchase Electro-Motive Canada, a plant which assembles locomotive diesel engines.  They even humbly accepted offer an offer from Canada’s prime minister, Stephen Harper, of $5 million dollars of taxpayers’ money in the form of tax breaks.

Politicians were no doubt pleased that Caterpillar profits increased by 95% in the first three quarters of 2011, which amounted to a staggering $3.4 billion in profits.  Better yet, production was up by 20 per cent and Canadian workers, who were being paid about $36.00 per hour, hadn’t had a raise for about six years.

Then, in a scene that could have come directly from Naomi Klein’s Shock Doctrine (create or exploit a “shock” to undemocratically force societal changes), the corporation insisted that its Canadian employees accept a 50% pay cut from about $36.00 per hour to $16.50 per hour, no cost of living adjustment, a new co-payment plan for health insurance and the elimination of pension plans.  This was the “shock”.

Adding salt to the wounds would be the fact that CEO James Owen received $22.5 million in 2011 for half a year’s work and he pocketed a pension worth $19 million.  (It’s always good to know that the taxpayer’s money is being well spent.)

Naturally, the CAW rejected the offer, and about 500 workers were locked out on New Year’s Day. Nice timing.

The company’s hidden agenda lies buried just below the surface. Now that they’ve exploited Canada for its technology and market share, they will likely employ the socially reprehensible but all too common tactic of relocating.

Caterpillar has acquired low-cost assembly operations in Brazil, Mexico, and Muncie, Indiana were wages run between $12.50 and $14.50 per hour so it would seem to be a “no-brainer” that the company will re-locate to sunnier climes.  Lax labour laws would permit replacement workers/scabs, but that is unlikely since the work requires relatively high skill levels.

Those affected will be the workers and their families, but also about 2,000 other workers and their families who supply and support the plant.  It’s a classic case of the continued assault on Canada’s middle class, on Canada’s unions and on our way of life. Sid Ryan, President of the Ontario Federation of Labour accurately observed; “Good jobs and retirement are being threatened by greedy corporations and every level of government.  If workers don’t start to fight back, decent jobs will become a thing of the past, and the middle class will be decimated.”

What is happening is commonly referred to as a “race to the bottom.”  Huge transnationals, enabled by governments and trade agreements, go where operating costs are cheapest, regardless of working conditions, environment, labour, or health impacts.  Countries and workers are exploited, and the corporations don’t clean up the externalized messes that they leave.

Where is the “bottom?” Currently it is China, where much of our manufacturing has been relocated.  The Apple manufacturer Foxconn supplies gadgets for Apple, Sony, Nintendo, HP and other companies.  In 2010, eighteen “suicide protestors” jumped from the top of the building.  Fourteen died.  More recently, one hundred and fifty workers threatened to leap from the roof to protest dust-choked factories, piece-meal pay and so on.  This time, they were coaxed down after two days.  Now there are “nets” around the building.

Psychopaths do not have a conscience, and the lack of moral restraints of transnationals like Caterpillar, dressed in the clothing of “cost-efficiency,” reveals a psychopath mentality, oblivious to the societal damage that it is creating.

Thankfully, Canadians are fighting back.  On Saturday, January 21, a huge rally, numbering as many as 15,000 people, rallied first at Victoria Park, and then at the Caterpillar plant in London.  Occupy and Labour chants co-mingled, as did shared goals and sentiments. As Canadians we are being exploited, and we’re fed up.  Government is supposed to selflessly govern for the people’s best interests, but instead it is in thrall of an economic theory which enables corporate profits to the detriment of the common good.

Part of the battle involves a re-structuring of our collective mind-set.

Obsessing over primary industries is part of the problem. In the last nine years, Canada lost 627,000 manufacturing jobs. Our reliance on energy exports drives up the dollar, thus making manufacturing more expensive and less effective.  It’s called the Dutch Disease, and it is transforming us once again to a country of “hewers of wood and drawers of water”.  This is part of the problem.

Foreign ownership is also part of the problem.  Fifty per cent of our manufacturing is in foreign hands, while the U.S, Japan, Germany, U.K, France, Italy, Netherlands, Norway, Finland, and Sweden have all kept outside ownership of their manufacturing to 4 per cent. We need to strengthen, not weaken, the Investment Canada Act, and thereby shake off our colonial mind-set.  Despite the photo-op it offered to Prime Minister Harper during the election, Caterpillar, with its well-entrenched anti-labour reputation, should not have been allowed to purchase Electro- Motive Canada. (Needless to say, P.M. Harper was conspicuously absent during the rally.)

We need to change trade deals and tie corporate welfare to social responsibility.  If the citizens are going to subsidize corporations with tax breaks, then there must be an enforceable and clear net benefit to the citizens.  The common political mantra of “Corporate Tax Cuts” is becoming increasingly abrasive to more and more Canadians.

Finally, we need to stop passively blaming “globalization” for our economic woes, and start actively changing “globalization” so that people in Canada and world-wide, take precedence over insular corporate profits.  Caterpillar’s bulldozing of Canadians is one of many symptoms of a dysfunctional system, but the system can be changed to the benefit of the people over the corporations. It should be a “no-brainer”.

What NO ONE is Saying About Lockdowns/ By James Corbett