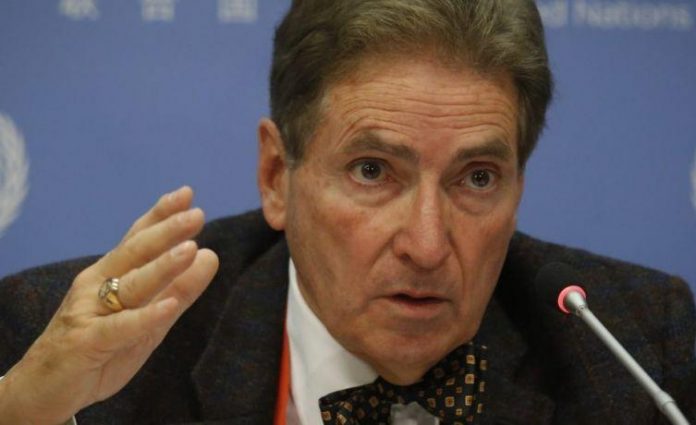 ParsiPolicy –  Alfred de Zayas is an American lawyer and retired high-ranking United Nations official. From 1 May 2012 to 30 April 2018 he served as the first UN Independent Expert on the Promotion of a Democratic and Equitable International Order. In an extensive interview with Parsi Policy he says that sanctions kill, stressing that UN General Assembly should adopt resolutions condemning unilateral coercive measures.

Q: As Iran is struggling with the spread of Coronavirus, US has imposed new sanctions. Is applying these sanctions amid the outbreak of a pandemic legal?

Unilateral coercive measures are illegal and contrary to the UN Charter. When they demonstrably cause deaths, they become an international crime. When the number of deaths is considerable, it becomes a crime against humanity under article 7 of the Statute of Rome and the International Criminal Court has jurisdiction to start an investigation and subsequently to prosecute persons responsible for imposing or following the sanctions.

The level of criminality is greater, when it is apparent that the State imposing the sanctions is deliberately taking advantage of a humanitarian crisis as a “regime change” strategy. There is no doubt about the criminality of the US sanctions – you do not need a court to tell you that. What we are witnessing is a clear case of an intentional crime by a party that considers himself immune from prosecution.

This is not unlike the Nazi leaders in World War II who were convinced that they would win the war and would never be called to account. There are certain similarities between the US sanctions and the Nazi siege of Leningrad 1941-44, which resulted in a million deaths — a crime against humanity as determined at the Nuremberg trials. The concept of “mens rea” applies, since the leaders of the United States have clearly stated their intentions to apply “maximum pressure”, regardless of the human consequences, malnutrition, suffering and death. Theories of criminology and the legislation of many states recognize the aggravation of the crime when perfidy or malice aforethought can be demonstrated as I explained in my report on Venezuela sanctions.

We are witnessing is a clear case of an intentional crime by a party that considers himself immune from prosecution.

Q:  United Nations have called for lifting Iran sanctions at the time of the Corona pandemic. What is the use of these organizations when countries such as US and UK do not consider themselves subject to its decisions?

The US, UK and other countries are bound by the UN Charter and by a number of international treaties and human rights treaties that are currently being violated by the sanctions. Numerous United Nations rapporteurs have warned about the adverse human rights impacts of the sanctions. In my capacity as Independent Expert on the promotion of a democratic and equitable international order (2012-2018) I repeatedly demanded the lifting of sanctions and the immediate provision of humanitarian assistance to the populations affected by sanctions.

The late Special Rapporteur on the impact of unilateral coercive measures on human rights, Idriss Jazairy, similarly demanded the lifting of sanctions – to no avail. There is indeed a “culture of impunity” in the United States, United Kingdom and other States that only give lip service to human rights, but violate them systematically.

The United Nations has a responsibility to condemn unilateral coercive measures, but since the United States, the United Kingdom and France systematically use the veto power to shield themselves from responsibility, no resolution can ever be adopted by the Security Council. It is thus the responsibility of the UN General Assembly to adopt resolutions condemning unilateral coercive measures and to formally adopt the 2017 Declaration on the Right to International Solidarity drafted by the Special Rapporteur on International Solidarity, Virginia Dandan.

US and UK only give lip service to human rights, but violate them systematically

Q:  Iran asked for IMF loan to fight Coronavirus. The request has been rejected even though it is the first time that Iran has applied for an IMF loan in 40 years. Why was the request rejected?

The United States wields enormous power in the IMF and nothing happens there against Washington’s will. In a very real sense, the IMF has been “weaponized” by the United States — and its policies correspond to Washington’s geopolitical priorities. Venezuela’s request for an IMF loan was similarly rejected.

Of course, the IMF has an “association agreement” with the United Nations and is bound by the UN Charter. Nevertheless, the UN Security Council, General Assembly or Secretary General have never specifically called the IMF to account. In my 2017 report to the General Assembly I demonstrated how the “loan conditionalities” of the IMF are incompatible with the human rights obligations of States parties, including under the UN Covenant on Economic, social and cultural rights and the Covenant on Economic, Social and Cultural Rights. I documented a number of deaths directly attributable to IMF decisions.

Q:  We were expected to see international convergence in the current crisis, if we see offensive realism on the part of countries around the world. Countries just strive to secure their own interests beyond international cooperation. Why?

1. The right to international solidarity is a human right by which individuals and peoples are entitled, on the basis of equality and non-discrimination, to participate meaningfully in, contribute to and enjoy a social and international order in which all human rights and fundamental freedoms can be fully realized.

Q: Do you agree that the unilateral US and its ally’s sanctions that are killing patients and increasing poverty of some sort of genocide by the West against Iran and some other countries?

The argument can be made because of the foreseeability of the consequences of US sanctions, the proof of “intention” on the part of the United States (article 2 of the Genocide Convention), and the demonstrable surge in deaths among the populations of Iran, Cuba, Venezuela, Syria, the sanctions satisfy the conditions to be are subsumed under the concept of genocide, as defined in the 1948 Genocide Convention.

Any State party to the Genocide Convention can invoke article 9 and refer the matter to the International Court of Justice to adjudicate whether the sanctions in question amount to genocide. The following 3 aspects of genocide as laid down in article 2 of the Convention are fulfilled:

(a) Killing members of the group;

(b) Causing serious bodily or mental harm to members of the group;

(c) Deliberately inflicting on the group conditions of life calculated to bring about its physical destruction in whole or in part;

An appeal should be forwarded to Dr. Adama Dieng, Special Advisor of the Secretary General on Genocide.[ii]

International law is not and never was self-executing. What is needed is international solidarity and good faith.

International law is not and never was self-executing. What is needed is international solidarity and good faith. The United Nations, however, is an association of sovereign states, and many are subject to bullying and blackmail by the powerful players like the US.

There are many things that United Nations agencies can do. For instance, UNICEF could make an estimate of children who have already died because of the sanctions, and an estimate of how many more children will die if the sanctions are maintained. The WHO could demand the immediate lifting of sanctions and carry out an investigation how the sanctions have weakened Iran’s health infrastructure and its ability to combat Covid-19. Because this is a murderous pandemic — if Iran were unable to contain it, the trans frontier impact would aggravate the situation worldwide and frustrate WHO strategies to contain it. FAO could carry out an investigation into the impact of sanctions on agriculture and nutrition in Iran.

ICC is already investigating the impact of US Sanctions against the population of Venezuela and should do the same with regard to Iranian, Cuban, Syrian victims.

UNHCR could carry out an investigation into the impact of sanctions as a “push factor” causing mass exoduses, a surge in migration and refugee flows. It is obvious that refugees and migrants, frequently in close contact with each other, and sometimes interned in camps, this is likely to aggravate the contagion of Covid-19.

Bottom line is that sanctions kill. US economic sanctions are contrary to the UN Charter and international law. Because of the very high number of deaths among the innocent civilian population, they constitute a form of “collective punishment”, illegal under customary international law. Moreover, US sanctions constitute “crimes against humanity” within the meaning of Art. 7 of the Statute of Rome. The International Criminal Court is already investigating the impact of US Sanctions against the population of Venezuela — The ICC should do the same with regard to Iranian, Cuban, Syrian victims.

Report of the Independent Expert on the promotion of a democratic and equitable international order: Visit to Venezuela and Ecuador