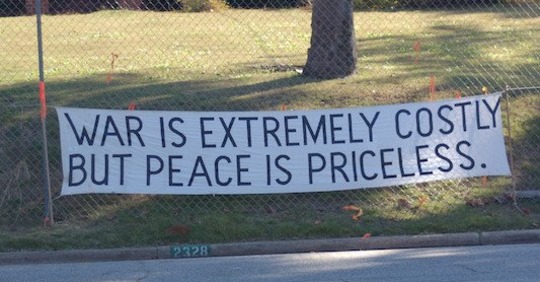 What are we really supporting when we refuse the truth and accept the war lies and the permanent war agenda?

The Truth is deplatformed in this New Fascist Order. Politicians do not represent the people. Representative government is a projected perception, empty of substance.

Transnational corporations impose impoverishing neoliberal diktats, the “Washington Consensus”, at home and abroad. Privatization schemes impoverish domestic populations at the expense of the public sphere. Equal access to health care and schooling is disappeared. The industrial base is delocated to vassal stooge countries where human and labour rights are largely non-existent.

The Fascist world order creates holocausts but denies it all.

“Those with consciences,” wrote Gideon Polya in 2015,  “recently marked the 12th anniversary on 19 March 2015 of the illegal and war criminal US, UK and Australian invasion of Iraq in 2003  that was based on false assertions of Iraqi possession of Weapons of Mass Destruction, was conducted in the absence of  UN sanction  or Iraqi threat to the invading nations, and led to 2.7 million Iraqi deaths from  violence (1.5 million) or from violently-imposed deprivation (1.2 million). The West has now commenced its Seventh Iraq War since 1914 in over a century of Western violence in which Iraqi deaths from violence or violently-imposed deprivation have totalled  9 million. However  Western Mainstream media have resolutely ignored  the carnage, this tragically illustrating the adage ‘History ignored yields history repeated’. ” (1)

Permanent warfare and globalizing poverty are hallmarks of this dystopia, as is widespread despair.

“It’s not only the impoverishment of large sectors of the world population;” explains Prof. Chossudovsky, “it is precipitating people into total despair and it’s the destruction of the institutional fabric, the collapse of schools and hospitals which are closed down, the legal system disintegrating, borders are redefined.

Essentially this stage, which goes beyond impoverishment, is the transformation of countries into territories and we see it occurring in the Middle East. The objective for Iraq and Libya and Yemen is certainly to transform a country into a territory, and then you recolonize it. You’re in a very different environment to that which has prevailed until recently.” (2)

But it doesn’t have to be this way. The Axis of Resistance is fighting back against the war lies, the terrorism, the permanent warfare. It is fighting for international law, nation-state sovereignty and territorial integrity. It is fighting against globalized fascism, poverty, and despair.

Those of us in the West who still believe in the ideals of democracy and freedom need to denounce the NATO occupation of our lands, our minds, and our pocket books. We need to denounce wars of aggression, imperialism, and war lies. We need Pro-Life political economies, not Pro-Death diseconomies.

The choice is ours.

War Propaganda and the West’s War of Terror against Syria and...