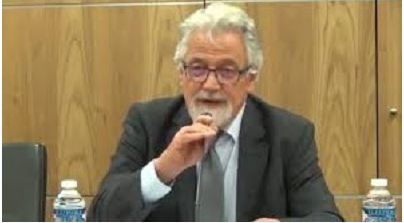 The Former French diplomat Prof. Michel Raimbaud believes that the real goals of Macron’s visit, that was surely undertaken  with Trump’s blessing is to bring Lebanon to request and accept international (i.e. western) assistance for the reconstruction  for  years to come, to isolate even more strictly Syria and to prevent the realization of the route linking Iran to the Mediterranean Sea.

In an interview with Syria Times e-newspaper, the diplomat said: ” We can guess the goals of Macron’s visit, that was surely undertaken in agreement with Trump. The matter is about not letting Lebanon alone with the neighboring or regional partners or big powers, which have proposed their assistance for harbour reconstruction: China, Russia, Iran to begin with…

The western powers don’t want to renew the experience of what happened at the beginning of this year, in the first weeks of the Covid pandemics when Russia and China and Iran and Cuba were the first to offer assistance to the countries affected, including western ones (as Italy and France), contrasting with the global indifference, if not hostility, of US and European Union.”

He affirmed that the goal of bringing Lebanon to request  and accept international assistance for the reconstruction and  for years to come is to control the future of  Lebanon, that was liable to take a new direction, distancing itself  from the West.

Unsaid nostalgia about the colonial period

“We can without risk  suppose that this heavy westernist approach aims also at preventing the realization of the road linking Iran to the Mediterranean Sea, and – last but not least – to isolate even more strictly Syria, that happens to be getting more and more severely “punished” through coercive unilateral American and European illegal sanctions,” Prof. Raimbaud added.

He pointed out that he wouldn’t meet Mr Macron’s demands, if he were the Lebanese legal government.

“Lebanon was in a very poor condition before the tragedy, and the situation is still worse after the blast. I can understand that the authorities are not in a capacity to refuse or even to select the offers of assistance, specially coming from France where France has a traditional “presence” and influence,” the diplomat argued.

He went on to say: ” As regards Mr Macron, whose knowledge about the Middle East seems fairly basic and sensitivity widely open to accepted ideas, he has got the common approach of many French politicians, in the new international environment, distinguished by some unsaid nostalgia about the colonial period.

In the case of France, the so-called “revolutions” turmoil was apparently favorable to a mental come-back to the good old times of the Mandate, one century ago, that was evocated. Prof. Raimbaud indicated that the first reactions show that Lebanese leaders are rather receptive to Macron’s demarche, including the proposal of organizing an “international” conference about the forthcoming assistance.

“The fact that Macron had a meeting with all the main leaders was highly appreciated.”

He emphasized that President Macron has no legal right to interfere in the Lebanese political system, according to the principles of the UN Charter. But the basic problem is that this Charter is “deceased” as well as the International Law, referring  to the Syrian permanent representative to UN Dr. Bashar al Jaafari’s recent words to the United Nations Security Council. “So many powers do interfere in the internal affairs of other countries, and violate the International Law, starting with the three western permanent members of the Council, even though they are supposed to be the guardians of the Charter. This is the very sad reality.”

Moreover, the diplomat stated that Washington is following closely the situation and the evolution in Lebanon (and in the “Greater Middle East” of G. W. Bush) and specially in all the countries which were put since 2001 on the list of the countries to be destabilized and destroyed.

“Macron’s visit was the first, but two days later visitors are many. It is fairly obvious that the US is closely interested and deeply concerned by the Lebanese actuality. Recent high level visits from US visitors have taken place in the recent past and Trump announced that medical and emergency assistance is being sent by plane,” the professor clarified.

Diplomatic codes have gone with the wind

He added: “You don’t need to be a great strategist or geo-politician to imagine that the French authorities will have been overtly instrumental to deal with the Lebanese affairs on behalf of Washington and to cover the US plan about Lebanon (and Syria). Let’s remember how President Chirac had been entrusted to treat the two countries by George W. Bush after the second Iraq War and Colin Powell’s visit to President Bashar al Assad (December 2003).”

In response to a question on clarifying Mr. Marcon’s statement when he said that he would make sure that “the French aid would get to the people who deserved it and would not go through the usual diplomatic channels”, Prof Raimbaud said: ” Of course, this kind of speech is not acceptable from the diplomatic viewpoint. But definitely diplomatic codes have gone with the wind.

The professor also preferred not to say what I would like to say to the Lebanese people who call to go back under the French mandate.

“During the past “revolutionary”  years, we have heard here and there so many stupid and strange speeches, statements or reactions that I am quite blasé.. Finally, is it much worse to claim and sign for the return of the French mandate than to express clearly, as some people do in the region, the wish to return to the Ottoman Empire old times? The troublesome situations are favorable to the explosion of stupidity and bad temptations,”

Commenting on a question about Who benefits from the explosion of Beirut port, the professor said that even before this tragedy, the common opinion was that Lebanon is at a crucial crossroads, having the choice between sticking up to the traditional and somewhat paternalistic relationship with US and Europe or opening a new partnership with Eurasia (China, Russia, Iran, etc…). “This catastrophe dramatizes the situation. And of course, we can ask the question : “Who benefits from the explosion?” and ready to venture risky answers. An international inquiry is being requested. While the International Special Court for Lebanon postponed its verdict about the Hariri’s assassination …Let’s wait and see. Personally, I am quite skeptical about the International Justice, deeply and obviously instrumental. Very expensive, inefficient, not neutral, heavily ideologically-oriented, the international justice or international inquiry is not a good solution. Let us recall that for the time being, nobody knows exactly if the blast is accidental or criminal.”

He concluded by saying: ” Of course the French President, who likes so much to give lessons to the World, will come back to check up whether the western conditions have been fulfilled or not.”

The 6th Anniversary Of Lattakia Massacre/ By Basma Qaddour, Aug. 4, 2019

SYRIA: Victory or the End of Humanity, Why Russia Got Involved ~ by, Andre Vltchek