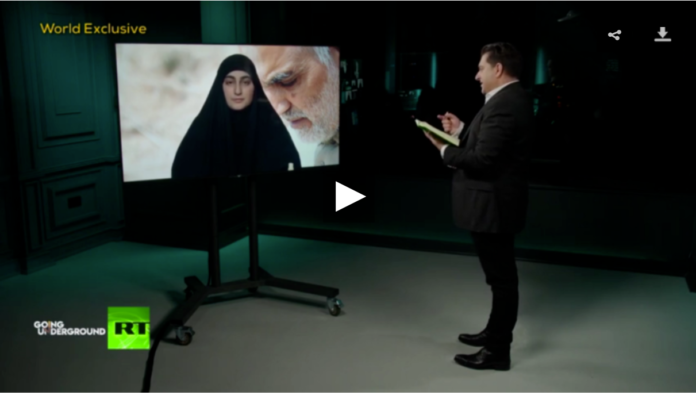 Qassem Soleimani’s daughter: My father saved the world from ISIS & Al-Qaeda, Trump is a monster!

On this world exclusive episode of Going Underground, we speak to Zeinab Soleimani, the daughter of Iranian General Qassem Soleimani, who was assassinated by the United States earlier this year on the orders of Donald Trump. She discusses how she found out about her father’s assassination, her father’s battles against ISIS and Al-Qaeda, the presence of US troops in the Middle East, why there is no difference between Donald Trump and Joe Biden, why the United States felt the need to assassinate her father and much more.

The head of Iran’s National Coronavirus Combat Taskforce, Alireza Zali, has stated that assassinated Iranian scientist, Mohsen Fakhrizadeh, was working on an Iranian vaccine for Covid-19.

In regards to Mohsen Fakhrizadeh’s assassination, no one has claimed responsibility, although Israel is suspected.
In the West, the late General Qasem Soleimani is accused of being responsible for the killing of hundreds of Americans and a force behind terrorist attacks in Israel. The Quds Force (of which he was commander) is accused of running extraterritorial military and clandestine operations.

Zeinab Soleimani was appointed by the Iranian Supreme Leader Ayatollah Ali Khamenei as the head of a newly established foundation, the “Qassem Soleimani Foundation.”

Libya: When Historical Memory is Erased