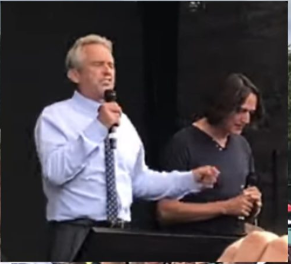 ER Editor: We’ve transcribed Robert F. Kennedy Jr‘s speech below (broadcast through RT Deutsch), punctuated as it is with German translation, made to hundreds of thousands of Germans assembled in Berlin yesterday, Saturday, August 29, 2020, to protest the anti-democratic measures of the COVID scare. Below that is a short video of the Brandenburg Gate area as yesterday’s crowd was assembling, with a short video of Kennedy speaking to a reporter.

Kennedy’s Children’s Health Defense has also issued its own video recorded from the back of the stage, along with the transcript of Senta Depuydt‘s speech and some photos. Senta is an Officer of the new European chapter of CHD. See this post on Children’s Health Defense for Friday’s CHD press conference in Berlin: Robert F. Kennedy, Jr. Holds a Press Conference in Berlin After Launching CHD’s Europe Chapter.

Governments LOVE pandemics. They love pandemics for the same reason they love war. Because it gives them the ability to impose controls on the population that the population would otherwise NEVER accept.

‘Thank you everybody. (applause)

Back at home in the United States, the newspapers are saying that I came here today to speak to about 5,000 Nazis. And tomorrow they’re gonna report that, yes, I was here and spoke to maybe 3-5,000 Nazis. And I look at this crowd and I see the opposite of Nazism. I see people who love democracy, people who want open government, people who want leaders that aren’t gonna lie to them, people who want leaders who won’t make up arbitrary rules and regulations to orchestrate obedience in the population. We want health officials who don’t have financial entanglements with the pharmaceutical industry, who are working for us and not Big Pharma. We want officials who care about our children’s health and not about pharmaceutical profits or government control. I look at this crowd – I see all the flags of Europe, I see people of every color, I see people from every nation, every religion all caring about human dignity, about children’s health, about political freedom — this is the opposite of Nazism! (applause)

Governments LOVE pandemics. They love pandemics for the same reason they love war. Because it gives them the ability to impose controls on the population that the population would otherwise NEVER accept – the great institutions and mechanisms for orchestrating and imposing obedience. Now, I’ll tell you something – it’s a mystery to me that all of these big important people like Bill Gates and Tony Fauci have been planning and thinking about this pandemic for decades, planning it so that we would all be safe when the pandemic finally came. And yet, now that it’s here, they don’t seem to know what they’re talking about. They seem to be making it up as they go along. They’re inventing numbers. They cannot tell you what the Case Fatality Rate for Covid is – that’s basic. They cannot give us a PCR test that actually works. They don’t have… They have to change the definition of Covid on the death certificates constantly to make it look more and more dangerous. But one thing that they’re good at is pumping up FEAR.

I’m going to say one more thing. They haven’t done a very good job about protecting public health. But they’ve done a very good job at using the quarantine to bring 5G into all of our communities. And to begin the process of shifting us all to a digital currency, which is the beginning of slavery. Because if they control your bank account, they control your behaviour. And we all see these advertisements on television saying 5G is coming to your community. It’s gonna be a great thing for all of you, it’s gonna change your lives, it’s gonna make all of your lives so much better. And it’s very convincing I have to say because I look at those ads and I think it’s great, I can hardly wait til it gets here. And because I’m going to be able to download a video game in 6 seconds instead of 16 seconds. And is that why they’re spending 5 trillion dollars on 5G? No. The reason is, for surveillance and data-harvesting. It’s not for you and me. It’s for Bill Gates, it’s for Mark Zuckerberg and Jeffrey Bezos. And all of the other billionaires. Bill Gates says that his satellite fleet will be able to look at every square inch of the planet 24 hours a day. But that’s only the beginning. He’ll also be able to follow you on all of your smart devices, through biometric facial recognition, through your GPS. You think that Alexa is working for you? She isn’t working for you. She’s working for Bill Gates spying on you.

And the pandemic is a crisis of convenience for the elites who are dictating these policies. It gives them the ability to obliterate the middle class, to destroy the institutions of democracy, to shift all of our wealth from all of us to a handful of billionaires to make themselves rich by impoverishing the rest of us. And the only thing between them and our children is this crowd that has come to Berlin! We’re telling them today you are not going to take away our freedom, you are not going to poison our children, we are going to demand our democracy back.

Thank you all very much for fighting!’ (applause)

The Liberty Beacon Project is now expanding at a near exponential rate, and for this we are grateful and excited! But we must also be practical. For 7 years we have not asked for any donations, and have built this project with our own funds as we grew. We are now experiencing ever increasing growing pains due to the large number of websites and projects we represent. So we have just installed donation buttons on our websites and ask that you consider this when you visit them. Nothing is too small. We thank you for all your support and your considerations … (TLB)

Comment Policy: As a privately owned web site, we reserve the right to remove comments that contain spam, advertising, vulgarity, threats of violence, racism, or personal/abusive attacks on other users. This also applies to trolling, the use of more than one alias, or just intentional mischief. Enforcement of this policy is at the discretion of this websites administrators. Repeat offenders may be blocked or permanently banned without prior warning.

Disclaimer: TLB websites contain copyrighted material the use of which has not always been specifically authorized by the copyright owner. We are making such material available to our readers under the provisions of “fair use” in an effort to advance a better understanding of political, health, economic and social issues. The material on this site is distributed without profit to those who have expressed a prior interest in receiving it for research and educational purposes. If you wish to use copyrighted material for purposes other than “fair use” you must request permission from the copyright owner.

Disclaimer: The information and opinions shared are for informational purposes only including, but not limited to, text, graphics, images and other material are not intended as medical advice or instruction. Nothing mentioned is intended to be a substitute for professional medical advice, diagnosis or treatment.