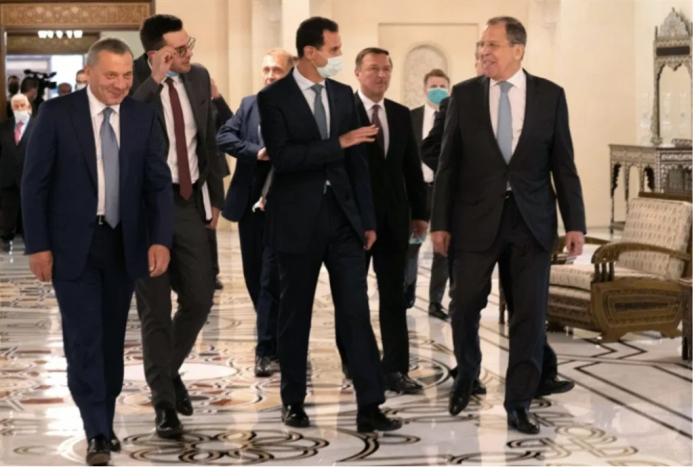 Russia is showing its willingness to consolidate its role as a superpower and its readiness to challenge the United States of America. Moscow will not return to the lethargy that began after Perestroika and lasted for two long decades (from 1991 until 2011). Its decision to wake up and return to the world stage began in Syria. It was 2015 when it sent its military forces to protect its interests and allies and to fight terrorism in the Levant. Today, it has sent its « diplomatic heavies » to Damascus, President Vladimir Putin’s envoy, Deputy Prime Minister Yuri Borisov and Foreign Minister Sergey Lavrov at the head of an economic-military delegation to prepare forty agreements in all important domains for signature. This has broken the US-EU sanctions on Syria. This step has a distinctive significance because it comes after the US administration’s decision to impose the severest sanctions on Damascus, the “Caesar Act”, and sends a clear message to the US that Russia’s area of ​​influence and its allies in the Middle East will not be abandoned. This is nothing less than a direct Russian confrontation with Washington.

In the Levant, both US and Russian forces are present in a small area, but with different goals, interests and reasons. Russia seeks the unity of Syria because it is its region of influence. Long-term stability must be established there as an example to other nations. That is not an easy goal to achieve when the US is operating in Syria, interfering with the flow of food, oil and gas in an area considered to be the resource reservoir of the entire country. US President Donald Trump tried to withdraw from Syria more than once, but Israeli interests and demands that the US remain prevented the extraction of US forces. Israel’s national security took precedence. Israel’s unachievable desire is to confront Iran, Hezbollah and President Bashar al-Assad and see all these enemies of Israel leaving Syria, or else be contained.

Moreover, the US continues to encourage the Syrian Kurds to divide Syria into a semi-state in the north-east of the country. The Kurds are changing the study programs in Al-Hasakah and Deir-ezzour provinces, where the Kurdish forces are operating under the command of the US. The Kurds have taken control of more than 100 schools and forced students to study the Kurdish language and newly modified books that do not conform to the general Syrian curriculum. In addition, the US has brought regional allies to train some of the Arab tribes present in the Kurdish regions, especially since there is a powerful dissonance between the Arab tribes and the Kurds in north-east Syria. With the help of the Saudis and Emirati officers, the Americans are trying to create a kind of Syrian “awakening” loyal to the USA.

It is necessary for Russia to secure stability in Syria, where it intends to stay for decades, invest in projects and infrastructure, impose security and stability, and hit hard the application and effect of US sanctions, no matter how much these sanctions increase.

Russia has achieved military integration and harmony of operation with the Syrian army and its allies in Syria. Today Moscow seeks to launch economic integration, even if differences remain between Russia and its allies, including Syria. But these are organised and accepted differences, and all parties operating in the arena of the Levant coexist with them.

Russia has no hostility towards Israel. However, hitting the “Caesar Act” is felt, no doubt, as a severe blow in Israel, which had been hoping for the downfall of the Damascus government and the partition of Syria. Israel had also hoped to see Syria, even if it won the war, on its knees due to US economic sanctions. This has been the latest attack on Syria. Consequently, Russia’s strong delegation to Syria represents a powerful economic message that will definitively destroy Israel’s dreams in the Levant. At the end of the day, the Israeli-Russian relationship is a detail: far more important is the Russian military and economic base in Syria and the Mediterranean.

MEP Clare Daly fights back with Truth for Peace

Parsi Policy: No Doubt about Criminality of US Sanctions: Former UN...