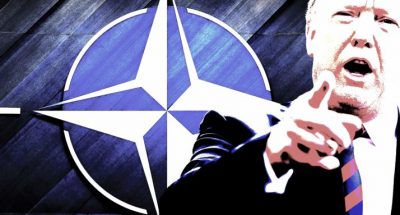 Western news fabricators would have us believe that Russia is a threat.  Russia is not a threat.  NATO is  the threat. Western politicians are fronts for self-serving, bailed-out, public-looting monopolies that create unreasonable fear for profit.  Arms manufacturers are a prime example.  These are the policymakers. They are war profiteers.

In 2016, General Petr Pavel, Chairman of the NATO Military Committee, admitted that,

“it is not the aim of NATO to create a military barrier against broad-scale Russian aggression, because such aggression is not on the agenda and no intelligence assessment suggests such a thing.“

Decoded, Russia was not a threat to the West.

“we don’t see any imminent threat against any NATO ally.”

Decoded, Russia is still not a threat.

But war profiteers benefit from war preparations, lucrative government contracts, scare-mongering, and the demonization of foreign leaders, in this case, President Putin. All of it is based on lies and deceptions.

The lies and deceptions generate plenty of money from increasingly thirdworldized tax payers.  The 2018 U.S. military budget is a staggering 700 billion dollars.

The Military Industrial Complex is a hallmark of publicly-funded “neoliberal” monopoly capitalism.  Socialism for the rich, death and/or poverty for everyone else.

The oligarch classes need to propagandize us all, otherwise the bi-partisan, toxic system would not garner public consent. Hence monopoly news fabricators are all about spreading false narratives to generate fear, hatred, war, and war preparations.

The North American public is being “colonized” by the same monopolies that we are so eager to support.

Who are the “Brutal Dictators”?