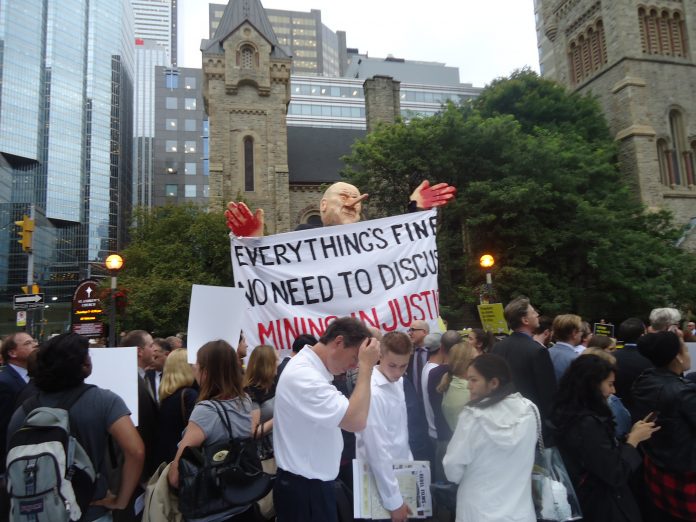 The “Fourth World”, as defined by Anthony J. Hall in The American Empire And The Fourth World, is a sustainable model of globalization that respects cultural, economic, and environmental pluralism, as it embraces globalized democracy, and the rights of self –determination. It represents trajectories towards Life and the rule of law, but needs to be allied with an effective apparatus of enforcement.

The current corporate globalization that is imposing itself on the world contradicts these Life forces. It imposes itself internationally through illegal wars of aggression, fascistic governance at home and abroad, extremism, abrogation of rights and freedoms, denial of self-determination, war, poverty, and death.

This Orwellian world, that is achieving its ascendancy through stealth, cloaks itself in the language of human rights — free trade agreements, humanitarian interventions — as it denies freedom and humanitarianism, domestically and internationally.

International Financial Institutions enable monopoly monocultures that displace indigenous peoples, and embed asymmetrical economies, when they should be enabling Life forces of biodiversity, and sustainable living.

International laws and agreements are seen as obstacles to overcome, as corporate sovereignty deals drive foreign policies that create and enable compliant proxy dictators who open countries to foreign investment, and mega everything : from mineral extraction, to agribusiness, to tourism.

Predatory business models – often advanced through wars of aggression, are ”free” of proper regulations, and against the will of informed populations, — all for the perceived benefit of international investors, who are further protected by Investor-State Dispute mechanisms embedded in corporate sovereignty agreements.

A recent case in Canada highlights the supremacy of corporations over elected polities:

The corporate supremacy over elected polities, as described in her report, underscores the danger of a host of additional corporate sovereignty agreements currently being negotiated behind closed doors:

Increasingly, this unsustainable, predatory model of globalization needs to protect itself from those who exercise their rights and freedoms (previously taken for granted), and so police state legislation is being introduced globally to an array of countries that still pretend to be democratic: Canada1, France2, Australia3, the U.S4, the U.K5, Germany6, Italy7 and so on.

As police state measures ramp up, so too does the propaganda, but the propaganda does not restrict itself to concentrated corporate media messaging. Institutions, such as universities — once thought to be the exclusive domain of the public — are increasingly being compromised, and the “market place of ideas” is fast becoming a box store of uniformity with a restrictive, externally-imposed agenda.

Toronto’s Munk School is one such example. In an article entitled, “Neoconning the public”, Anthony Hall explains that,

“(the) Munk School Director must satisfy Peter Munk – and, after his death, the trustees of Munk’s estate – that he or she is meeting predetermined academic and “branding” guidelines. The U of T’s adoption of these conditions sets very unfortunate precedents for the corporate sponsoring of other academic institutions.”

The predatory business model being promoted is exemplified by Barrick Gold, and its founder, Peter Munk, but the model is not atypical. As an example, the same issues and violations occurred at Goldcorp mining operation in Honduras .

A subsequent study in 2010 found high levels of cadmium, mercury, arsenic, and other heavy metals. Additionally, water was unfit for human consumption or local agriculture – all in this rural region with an already scarce water supply.

The unethical “extractavist” mindset of Barrick Gold and others should be condemned rather than perpetuated in Canada’s Business schools.

Violations of international agreements and declarations such as the United Nations Declaration on the Rights of Indigenous Peoples (UNDRIP), Free Prior Informed Consent (FPIC), International Labour Organization (ILO) contradict notions that Canada’s mining sector, both domestically and internationally, practice sustainable, ethical business practices, and yet it is the influence of this same industry that is insinuating itself into institutions of higher learning and restricting the freedom of ideas and the elaboration of life-enhancing, sustainable business models of development – all imperatives of a Fourth World, sustainable model of globalization that champions unity in pluralism, and alternative models of self-determination.

The Fourth World model of cultural, economic, and biological pluralism, of the rule of law, and of democracy, and freedom are necessary ingredients for a habitable planet, but the continued perpetration of predatory economic models, coupled with the absence of an effective apparatus to enforce international laws and agreements, is imperilling humanity as never before.