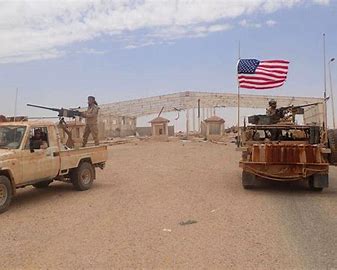 Ahmad Touzan, a spokesman for the Syrian Military Prosecution, speaks at a press conference in the capital Damascus, Syria, on January 27, 2022. (Photo by Syrian Arab News Agency)

The Syrian Military Prosecution says it has launched an investigation into violations committed by the United States military forces in the conflict-plagued Arab country, particularly the occupation troops’ training of the Daesh Takfiri terrorists and collaboration with them to carry out various acts of terror.

“The Military Prosecution has come up with sufficient and incontrovertible evidence that American forces assert fairly direct control over Daesh members as well as their terrorist activities across Syria, using its illegal base in al-Tanf [region in southern Syria],” Ahmad Touzan, a spokesman for the prosecution, said at a press conference in the capital Damascus on Thursday.

He noted, “We have convincing proof that many Daesh terrorists are currently being trained at that base. The armed terrorists visit the base aboard their vehicles without any restraint.”

Touzan went on to stress that the Syrian Military Prosecution will explore all available judicial means in order to prosecute American occupation forces for the plunder of natural resources in Syria’s oil-rich northeastern province of Hasakah as well as the eastern province of Dayr al-Zawr.

“An in-depth investigation is underway into US criminal acts in Syria, namely destruction of various buildings, loss of human lives, attempts aimed at undermining national sovereignty, illegal shipments of crude oil, cruel sanctions and collaboration with Daesh in occupied territories,” he said.

“The probe will provide Syrian authorities with the opportunity to take appropriate legal actions against the US administration and American occupation forces in the near future,” Touzan pointed out.

The Syrian Military Prosecution finally denounced Washington over supporting the separatist agenda of Kurdish-led militants from the so-called Syrian Democratic Forces (SDF) by providing them with different kinds of ammunition.

The US military trains anti-Damascus militants at al-Tanf base, which is situated near Syria’s borders with Iraq and Jordan.

Washington has unilaterally declared a 55-kilometer “de-confliction zone” around the facility, and frequently threatened to target Syrian forces within the area.

Back in May 2020, a number of captured Daesh terrorists confessed to close cooperation with US military forces stationed at al-Tanf base on carrying out various acts of terror and sabotage.

During confessions broadcast on Syria’s state-run television network, several terrorists revealed that they were instructed by American forces to target Syrian government troops in and around the ancient city of Palmyra, the Tiyas Military Airbase – also known as the T-4 Airbase, the Shaer gas field as well as nearby oil wells.

“Once a close aide to our commander Hassan Alqam al-Jazrawi came to me and said he was in contact with the Americans at al-Tanf base. The man, whose name was Hassan al-Wali, added it was necessary to target Palmyra and T4 Airbase, and that US forces would provide us with rocket launchers and machine guns, besides financial support, cars and whatever we needed,” one of the terrorists said at the time.

He added, “Americans would also launch reconnaissance aircraft to monitor the movements of Syrian army soldiers in Palmyra region, and inform us of their activities.”

#Sweida, and the US Sponsorship of ISIS/By Vanessa Beeley

The US escalates its war of aggression against the Syrian people/...