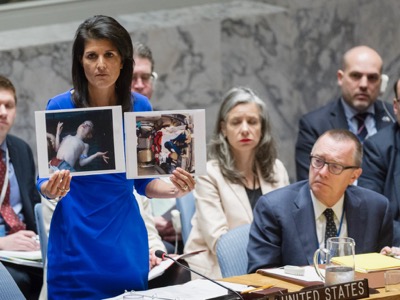 When retired General Wesley Clark reported in March 2007 that, according to his source, the U.S was going to attack seven countries in five years[1], he was announcing to the world an acceleration of pre-planned, cataclysmic, criminal warfare.

We were warned in advance, but most of us paid little attention. Lies and crimes of imperial overlords are always well masked, and the post 911 wars are no exception.  The Military Industrial Media Complex sold us these wars, and they will write the histories of these wars as well. Most of us will remain oblivious to reality, as long as we are the ones not being slaughtered. The unstated, criminal logic is that “The ‘Other’ always deserves what he gets”.Canadians seemingly accept the notion that Syria deserves to be destroyed.  It is an insane idea, but unconsciously at least, Canadians accept it.

Canadians’ tacit consent for their government’s criminal warmongering would be withdrawn if there was any truth in mainstream media war messaging, but the media conglomerates won’t be dissolved overnight, the CBC will continue to vomit war propaganda, and an informed public won’t emerge anytime soon.  Consequently, Canadians still think that al Qaeda blew up the World Trade Center Buildings, they still think that the “War on Terror” is legitimate, and they still think that our military is fighting for freedom and democracy.

Shame on us for thinking otherwise.

The following formula is used to “take out” countries.  Each step was employed against non-belligerent Syria.

Each of us can do something to make a positive difference. Sharing the truth about Syria disempowers the diabolical North American Military Industrial Media Complex that is enslaving us all. The following interview is a window into the Syria that our governments want to disappear.Western Backed Terrorists in Syria: “Accepted Truths” Are Black Lies

On the Need to be Free from the Press