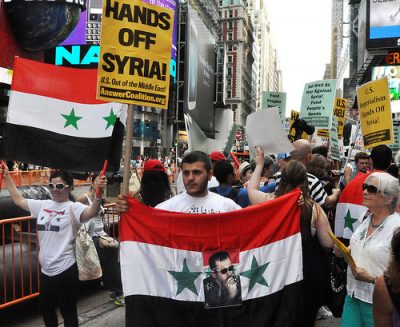 The West’s intentions in Syria are not noble or humanitarian, despite what government spokespeople might suggest.

All of the militarized groups in Syria are supported by the West, and they all exist because of the West.

“Moderate terrorists” never existed. ISIS, al Qaeda et al. are ALL Western proxy forces (even when they are fighting each other).

The West has a very LONG HISTORY of using mercenary terrorists (ie ISIS/al Qaeda) to destroy prey nations. None of it is accidental.[1]

The purpose of these terror groups has always been to destroy and erase Syria.  Syria is a secular, pluralist, democratic, socially-uplifting country, and this is the identity that the terrorists have been destroying.

Contrasts between terrorist-controlled areas and government secured areas have consistently demonstrated this.

Whereas the Syrian government provides free, accessible, secular education for all, terrorists in  occupied areas actively deny these rights to Syrians.

Are you happy to be back on the government side?

Did you go to school?

Are you going to go to school on the government side?

To the first and final questions they responded Yes. To the middle question, asking whether they attended school in occupied areas, they responded No. Translator/teacher Mahmoud Altaweel adds that the kids exclaimed,“They used to feed us barley as animals food and kept us locked in captivity. No way out for fresh air.”

Most Syrians do now, and always have supported their legitimate government.  Election results[2] and photos from liberated areas demonstrate this reality.

A green bus trip to Idlib, Syria would disabuse Canadian politicians of any illusions that they might still harbor about their criminal support for terrorism in Syria.