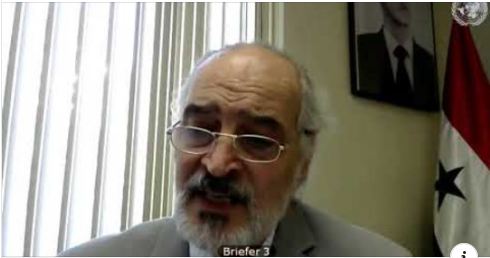 🔴The US steals openly 200.000 oil barrels from the Syrian oil fields on a daily basisز

🔴It also steals 400.000 tons of cotton and sets fire to thousands of hectares of wheat fields.

🔴It deliberately weakening the value of the Syrian pound.

🔴It imposes economic coercive measures suffocating the people of Syria.

🔴It occupies part of my country {Syria] and protects its Turkish partner that occupies other swathes of the territories of Syria.

🔴The US permanent representative to the UN talks about her Administration’s concern over the deteriorating living situation of the Syrian citizens attributing such deterioration to what she calls the regime.

🔴Then the legitimate question here becomes the follow: Does that not indicate an acute illness situation? Are not these the symptoms of political schizophrenia.

US Coalition is Sustaining, Expanding, Training and Recruiting ISIS/ By Vanessa...

Syria: the illegal US occupation is providing safe haven for terrorism