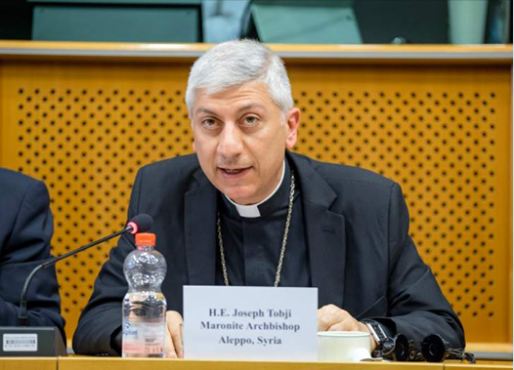 As the US #Caesar_Act came into effect against Syria on Wednesday, the Maronite Archbishop of Aleppo condemned the measures, saying heaping more suffering on the people is “criminal” and “inhuman”.

The Archbishop said, the so-called ‘targeted’ sanctions of the Caesar Act, “are a lie that not even a child would believe.” He said it is clear that the goal is “to increase the suffering of population to fuel popular discontent and thus produce regime change.”

“But this way of acting is criminal. Putting an entire people in distress at a time like this, where there is also the spectre of the pandemic around the world is inhuman.”

The fact that the US is willing to go to any lengths to pursue its goals, “even to sacrificing millions of people, poor people and families,” Archbishop Tobji said, “is a diabolical act.”

Devastated by the long war, the condition of the desperate people has been exacerbated by the Covid-19 pandemic that continues taking its toll on victims within Syria’s borders.

Archbishop Tobji said: “The bomb comes suddenly and kills people around the place where it falls.” “Now, in Syria, there is real hunger, and millions of people are facing the prospect of an announced death, without possible escape routes.”

“Hospitals, lack the necessary medicines and equipment for life-saving surgeries, such as stents.”

“If you enter into the depths of the hardships and sufferings of families, you will hear stories that make you cry. Things cannot be any worse,” Archbishop Tobji added.