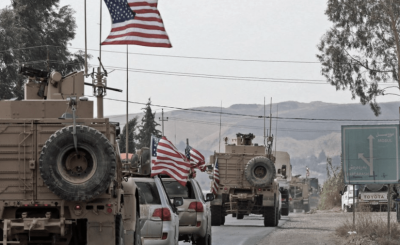 The shifting sands of the Syrian conflict have left many wondering what might happen next between the Kurds, the US, and Russia inside Syria.  I reached out to, Professor Tim Anderson, an Australian political economist, and author of “The Dirty War on Syria: Washington, Regime Change and Resistance”, “Countering War Propaganda of the Dirty War on Syria”, “Axis of Resistance: towards an independent Middle East” for some answers.  Despite Dr. Anderson’s busy schedule, he replied to my interview questions.

Steven Sahiounie:  What is the possible future of the Syrian Kurds, given the fact they invited the US military to invade Syria?

Tim Anderson:  Before assuming that all Syrian Kurds are separatists and collaborators, we should first observe their historical character. Before the 2011 conflict, Jordi Tejel classified Syrian Kurdish identities as comprising Arab nationalist, communist, and Kurdish nationalist, with Syrian Kurd leaders Husni Za’im and Adib al-Shishakli campaigning for a non-sectarian ‘Greater Syria’. Turkish Kurd influence began early in the 20th century, as Kurdish culture was repressed by the post-Ottoman Turkish state. Turkish Kurds took refuge in Syria after their failed rebellion in 1925, and the idea of a Syrian Kurdish party first came in 1956 from the Turkish refugee Osman Sabri. Another Turkish refugee Nûredîn Zaza became president of that party. Let’s remember also that two great heroes, Salah ad-Din and Sheikh Ramadan al Bouti, both Syrian Kurds, are buried on the grounds of the Ummayad Mosque.

Even today the Kurdish separatist movement in Syria is still run by the Turkish Kurds. For all his madness and delusions, Turkish leader Erdogan is right about this: the idea of ‘Rojava’ in northern Syrian would have been simply a stepping stone for the Kurdistan project in Turkey. However, advances by the SAA, backed by Russia and Iran, have removed any possibility of a ‘Rojava’ excision from Syrian territory. Historically the project was doomed because (one) the Kurdish groups in the north never had an exclusive claim to those lands (there are several others groups, often outnumbering the Kurds), (two) the separatist movement in Syria has been overdetermined by the politics of and migration from Turkey, and (three) intervention by the US has only raised separatist expectations while damaging Kurdish relations with other Syrian groups.

In the current circumstances, SAA advances and retreats by the USA have driven a northern group of Kurdish separatists back to the SAA and the Russians, while the other group in the east maintains its collaboration with US occupying forces. That will disintegrate when the Syrian people and the SAA take back more territory, when Iraqi-Syrian integration strengthens, and when US troops are forced out.

In the end, there may be some political accommodation of Kurdish culture and language and some level of local administration, in the revised Syrian constitution; but this will not likely be at the expense of other groups, like the Arabs, Armenians, Assyrians, Circassians, and others.

SS:  Will the situation in the east of Syria escalate between the Syrian Arab Army and the US military?

TA:  US occupation forces are meeting regular low-level confrontations with the NDF, the Russians and local residents. There has been some violence but so far this has not escalated drastically. Both sides have backed down. The Russians remain honest brokers in this situation. Since the US is under pressure and is gradually retreating in both Syria and Iraq, I expect the patience and management of the situation to continue. We saw Trump back down after Iran’s strike on their airbase in Iraq, they have made a partial withdrawal from Syria and they are speaking of a partial withdrawal from Iraq. If they stall they will face continued local pressures, such as in Syria’s east and Baghdad’s green zone.

SS:  Tension between Damascus and Ankara is at the highest level.  Will the Russians stabilize the situation, or we will see a war between the two sides?

TA:  The moves by Erdogan are difficult to understand. The al Qaeda gangs he backs are rapidly losing ground in Aleppo and Idlib, and he has made no new advances elsewhere in northern Syria. Yet he persists with his failed caliphate project, perhaps to prolong the conflict damage the minds of those (especially young people) in Syria’s north.

Erdogan has no legitimacy in Syria, other than that given by Russia in its peacekeeping agreement, which Erdogan has trashed. The Russian military admits that Erdogan is the main obstacle in Idlib.

Despite this madness, I believe Russia will discipline Erdogan, hold him at bay while his gangs are destroyed. Much the same happened with the US and Israeli backed gangs in the south. In the end, the US allowed them to be smashed by the SAA. Erdogan will sacrifice the takfiri gangs, who these days are moved around by money. Both Kurdish militia and SAA told me late last year that there was “no difference” in any respect between the Free Army, Nusra and DAESH. They are directed and redirected by money. However, the foreign component does decrease, as money decreases; this happened with the SDF in Syria’s north.

SS:  What is the role of the US in the tension between Damascus and Ankara?

TA:  Washington is losing in Syria and knows it is losing but, as a senior Syrian General told me late last year, they want to prolong the game and make the Syrian people suffer. They want the world to see the price of resistance. Yet they are retreating, as they maintain bold words.

For all his madness, Erdogan will remain alive to signals from Washington. He has had US permission to continue with this game, so far.

But the region is shifting. Iran, Syria and the Resistance in Lebanon have held firm. The Resistance in Iraq gained tremendous cohesion with the murder of Muhandis and Soleimani. All the gains the US had made in Iraq – with street protests, blaming Iran, etc – that all went down the drain when they murdered those heroes. Then Iran hit the US airbase directly and, by the discipline of the strike, contained US retaliation. The region now openly speaks of expelling the enemy from the entire region. Things are changing. So I believe that, as Erdogan is forced to retreat in northern Syria and as Washington is forced to retreat from the region, the Resistance Axis will steadily impose its own terms.

Dr. Tim Anderson is Director of the Sydney-based Centre for Counter Hegemonic Studies. He has worked at Australian universities for more than 30 years, teaching, researching and publishing on development, human rights and self-determination in the Asia-Pacific, Latin America and the Middle East. In 2014 he was awarded Cuba’s medal of friendship. He is Australia and Pacific representative for the Latin America based Network in Defence of Humanity. His most recent books are: Land and Livelihoods in Papua New Guinea (2015), The Dirty War on Syria (2016), Global Research, 2015, now published in ten languages; Countering War Propaganda of the Dirty War on Syria (2017) and Axis of Resistance: towards an independent Middle East (2019).

Steven Sahiounie is a political commentator.

The Dirty War on Syria

To order the PDF version of the Dirty War on Syria, click here, sent directly to your email.The original source of this article is Global ResearchCopyright © Prof. Tim Anderson and Steven Sahiounie, Global Research, 2020