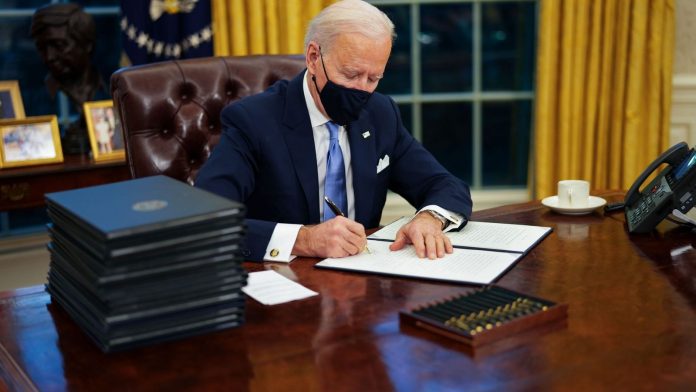 Two news items published in these days by the Washington Post – “9/11 families say Biden not welcome at memorial events unless he releases government evidence” and “Biden signs executive order requiring review, release of some classified 9/11 documents” – open other deep cracks in the official version. The fact that, twenty years later, there are secret documents about 9/11 in Washington’s closets means that its real dynamics are still to be ascertained.

What is clear, however, is the process that set September 11 in motion. In the previous decade, after the collapse of the Soviet “evil empire”, the US strategy had focused on “regional threats”, conducting the first two post-Cold War wars: the Gulf War and the war against Yugoslavia. Their purpose: to reinforce the US military presence and political influence in the strategic area of the Gulf and in the European region, at a time when its assets were being redesigned. At the same time, the U.S. strengthened NATO by giving it (with the consent of the Allies) the right to intervene outside the area and extending it to the East in the countries of the former Warsaw Pact.

In the meantime, however, the U.S. economy, while remaining the first in the world, had lost ground even to that of the European Union. In the Arab world, there were growing signs of impatience with the US presence and influence, while in Asia, the Russian-Chinese rapprochement raised the possibility of a coalition capable of challenging the US supremacy. Exactly at this critical moment, the attack of September 11, 2001 allowed the United States to open a new strategic fase, with the official motivation of facing the “global threat of terrorism”. It is a war of a new kind, of a permanent nature, in which there are no geographical boundaries, conducted against an enemy that can be identified from time to time not only in a terrorist, but in anyone who obstructs U.S. interests. The perfect image of an enemy, intercambiable and enduring. President Bush defined it as “a dark enemy, hiding in the dark corners of the Earth”, from which it emerges suddenly to carry out terrifying actions in the light of day, with a very strong emotional impact on public opinion.

Thus begins the “global war on terrorism”: in 2001 the United States attacked and occupied Afghanistan, with the participation since 2003 of NATO; in 2003 they attacked and occupied Iraq with the participation of NATO allies; in 2011 they attacked with NATO the Libyan State, destroying it (as they had already done with Yugoslavia); still in 2011 they started the same operation in Syria, blocked four years later by the Russian intervention in support of Damascus; in 2014, with the putsch in Maidan Square, they opened another armed conflict in Ukraine.

In the “global war on terrorism” the US finances, arms and trains (with the help in particular of Saudi Arabia and other Gulf monarchies) Islamic terrorist movements, exploiting their rivalries: in Afghanistan mujaidin and Taliban; in Libya and Syria an armed regrouping of groups that Washington had until recently branded as terrorists, from Afghanistan, Bosnia, Chechnya and other countries. In May 2013, a month after founding ISIS, the “caliph” Ibrahim al-Badri meets in Syria the U.S. Senator John McCain, leader of the Republicans appointed by the Democrat Obama to carry out covert operations on behalf of the government.

The war is not only conducted with air, land and naval forces but, increasingly, with special forces and killer-drones. Their use offers the advantage of not requiring congressional approval and remaining secret, not eliciting public reaction. Special operations commandos often do not wear uniforms, but disguise themselves in local attire. The killers and the torture they carry out thus remain anonymous. The elite Navy Seals “Team Six” is so secretive that officially its existence is not even acknowledged. According to the official narrative, it was this unit that killed Osama bin Laden in 2011, whose presumed corpse was buried in the sea. Or the killing of an already dead or captured bin Laden is staged.

For the “non-conventional war”, the US Special Operations Command employs more and more companies of contractors (mercenaries). In the area of the US Central Command, including the Middle East, the Pentagon’s contractors are over 150 thousand. In addition, there are those hired by other departments and allied armies. They are supplied by an oligo-poly of large companies, structured as true multinationals.

In this way war disappears more and more from our eyes, putting us in the condition of those who walk on an apparently safe ground, not knowing that under their feet act the forces that can cause a catastrophic earthquake.

Featured image is from OffGuardian

Over Two Decades, US’ Global War on Terror Has Taken Nearly 1 Million Lives and Cost $8 Trillion

Cover-up and Propaganda: The 9/11 Commission Finishes Its Dirty Work

The 9/11 Independent Commission is an orchestrated coverup, controlled by the Bush White House and Bush Justice Department, headed by Bush-appointed directors, and run by legendary Washington fixers and veteran war criminals with direct ties to the most likely 9/11 planners, operatives and beneficiaries. This fact has been amplified, as…

9/11 Accomplices vie for US Presidency

In his much-ballyhooed acceptance speech, Barack Obama declared that he would “finish the fight against the terrorists who actually attacked us on 9/11”. If Obama wishes to be true to his promise, he could begin with his own running mate, Senator Joe Biden. Biden and the ISI chief Biden was…

A Legitimate Warning from Caleb T. Maupin on Western Support for...

Half of Quebec Patients Hospitalized ‘With COVID’ Not Admitted ‘for COVID’/...

9/11 Truth: What Caused the Collapse of the WTC Buildings?