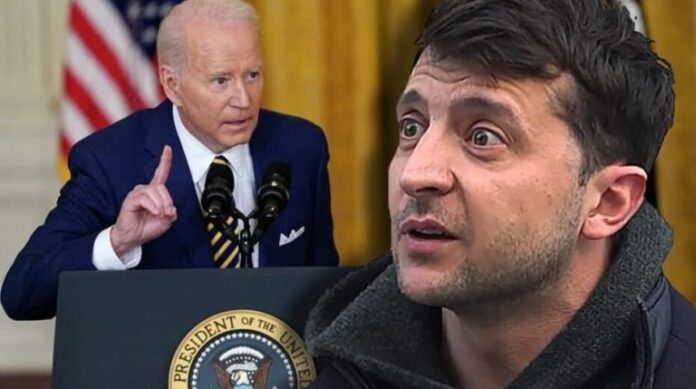 Volodymyr Zelensky is the current President of Ukraine. He was elected in a landslide victory in 2019 on the promise of easing tensions with Russia and resolving the crisis in the breakaway republics in east Ukraine. He has made no attempt to keep his word on either issue. Instead, he has greatly exacerbated Ukraine’s internal crisis while relentlessly provoking Russia..

Zelensky has had numerous opportunities to smooth things over​ with Moscow and prevent the outbreak of hostilities. Instead, he has consistently made matters worse by blindly following Washington’s directives.

Zelensky has been lionized in the west and praised for his personal bravery. But—as a practical matter—he has failed to restore national unity or implement the crucial peace accord that is the only path to reconciliation. The Ukrainian president doesn’t like the so-called Minsk Protocol and has refused to meet its basic requirements. As a result, the ethnically-charged, fratricidal war that has engulfed Ukraine for the last 8 years, continues to this day with no end in sight. President Vladimir Putin referred to Zelensky’s obstinance in a recent speech delivered at the Kremlin. He said:

Most Americans fail to realize that Zelensky’s rejection of Minsk was the straw that broke the camel’s back. Russian officials had worked for 8 years on Minsk hammering out terms that would be agreeable to all parties. Then—at the eleventh hour—Zelensky put the kibosh on the deal with a wave of the hand. Why? Who told Zelensky to scrap the agreement? Washington?

And why did Zelensky deploy 60,000 combat troops to the area just beyond the Line of Contact (in east Ukraine) where they could lob mortal shells into the towns and villages of the ethnic Russians who lived there? Clearly, the message this sent to the people was that an invasion was imminent and that they should either flee their homes immediately or take shelter in their cellars. What objective did Zelensky hope to achieve by forcing these people to huddle in their homes in fear for their lives? And what message did he intend to send to Moscow whose leaders looked on at these developments in absolute horror?

Did he know his actions would set off alarms in Russia forcing Putin to call up his military and prepare them for a possible invasion to protect his people from– what looked to be– a massive ethnic cleansing operation?

So, how are these actions consistent with Zelensky’s campaign promises to restore national unity and peacefully resolve Ukraine’s issues with Russia?

They’re not consistent at all, they are polar opposites. In fact, Zelenskyy appears to be operating off a different script altogether. Take, for example, his complete unwillingness to address Russia’s minimal security concerns. Did Zelensky know that Putin had repeatedly said that Ukraine’s membership in NATO was a “red line” for Russia? Did he know that Putin has been saying the same thing over-and-over again since 2014? Did he know that Putin warned that if Ukraine took steps to join NATO, Russia would be forced to take “military-technical” measures to ensure their own security? Does Zelensky know that NATO is Washington-controlled Alliance that has engaged in numerous acts of aggression against other sovereign states. Here’s a short list of NATO’s accomplishments:

Does Zelensky know that NATO is openly hostile to Russia and regards Russia a serious threat to its expansionist ambitions?

Yes, he knows all these things. Still, he publicly expressed his interest in developing nuclear weapons. What is that all about? Imagine the problem that would pose for Russia. Imagine if a US-backed puppet, like Zelensky, had nuclear missiles at his fingertips. How do you think that might impact Russia’s security? Do you think Putin could ignore a development like that and still fulfill his duty to protect the Russian people?

And why did Zelenskyy agree to allow shipment after shipment of lethal weaponry to be delivered to Ukraine if he sincerely sought peace with Russia? Did he think that Putin was too stupid to see what was going on right beneath his nose? Did he think he was normalizing relations by expanding his arsenal, threatening his own people, and jumping through whatever hoops Washington set out for him?

No, Putin’s demands were entirely reasonable, but Zelenskyy shrugged them off anyway. Why?

Does Zelenskyy know that there are Right Sektor, neo-Nazis in the government, military and Security Services. Does he know that, while their numbers are small, they are a force to be reckoned with and factor heavily in the hatred and persecution of ethnic Russians? Does he know that these far-right elements participate in torchlight parades, imprint swastikas or SS tattoos on their arms, and revere the racialist ideology of Adolph Hitler? Does he realize that many these Nazis have engaged in criminal acts of brutality including the incinerating of 40 civilians at the Trade Union Building in Odessa in 2014? Does he think that the CIA’s covert programs to arm and train these right-wing militants builds confidence or does he think it reminds Moscow of a catastrophic war in which 27 million Russians were exterminated by Germany’s Wehrmacht?

Can you see how everything Zelensky has done, was done with the intention of provoking Russia?

All the talk of joining NATO, all the talk about building nukes, the steady buildup of lethal weaponry, the movement of troops to the east, the refusal to implement the Minsk Treaty and the rejection of Putin’s security demands. All of these were deliberate provocations. But, why? Why “bait the bear”; that’s the question?

Because Washington wants to lure Russia into a war so it can further demonize Putin, isolate Russia, launch a counterinsurgency operation against the Russian army, and impose harsh economic sanctions that will inflict maximum damage on the Russian economy. That’s Washington’s strategy in a nutshell, and Zelenskyy is helping Washington achieve its objectives. He’s allowing himself to be Washington’s tool. He is sacrificing his own country to advance the interests of the United States.

All this helps to underscore a point that is never considered by the media and never discussed by the pundits on cable news, that is, that Ukraine is going to lose the war, and Zelenskyy knows it. He knows the Ukrainian Armed Forces are no match for the Russian army. It is like a Giant swatting a fly. Ukraine is the fly. The public needs to hear this, but they’re not hearing it. Instead, they’re hearing blabber about heroic Ukrainians fighting the Russian invader. But this is nonsense, dangerous nonsense that is emboldening people to sacrifice their lives for a lost cause. The outcome of this conflict has never been in doubt: Ukraine is going to lose. That is certain. And, if you read between the lines, you’ll see that Russia is winning the war quite handily; they are crushing the Ukrainian army at every turn, and they will continue to crush them until Ukraine surrenders. Check out this brief interview with Colonel Douglas MacGregor on Tucker Carlson and you’ll understand what’s really going on:

Colonel McGregor: “Well, the first 5 days, we saw a very slow methodical movement of Russian forces entering Ukraine…. They moved slowly and cautiously and tried to reduce casualties among the civilian population, trying to give the Ukrainian forces the opportunity to surrender. That is over. And the phase in which we find ourselves now, Russian forces have maneuvered to encircle and surround the remaining Ukrainian forces and destroy them through a series of massive rocket artillery strikes, air strikes with Russian armor slowly-but-surely closing the distance and annihilating what’s left. So, this is the beginning of the end of the Ukrainian resistance.

Tucker: What is Putin’s goal here?”

Colonel McGregor: “Putin set out to honor his word from 2007 at the Munich Security Conference where he said ‘We will not allow the expansion of NATO to a point where NATO is touching our border, specifically, Ukraine and Georgia. We see these as Trojan Horses for NATO’s military power and US influence... He repeated that (warning) over and over and over again, in the hopes that he could avoid taking action to effectively clean-out eastern Ukraine of any opposition forces whatever, and to put his forces in a position vis-a-vis NATO to deter us from any further attempts to influence or change Ukraine into a platform for the projection of US and western power into Russia.

Now his goal–as of today– is to seize this whole area of eastern Ukraine (east of the Dneiper River) and he has has crossed the river where he is preparing to go in and capture that city (of Kiev) entirely.

At that point, Putin has to decide what else he wants to do. I don’t think he wants to go any further west. But he would like to know that whatever emerges from this as Ukraine… is “neutral” not-aligned and, preferably, friendly to Moscow. That he will accept. Anything short of that, and his war has been a waste of time.”(“Colonel Douglas MacGregor with Tucker Carlson”, Rumble)

What can we deduce from this short interview:

But here’s the important thing: All of the main actors in this fiasco knew from the very beginning that Ukraine had no chance of defeating the Russian army. That was a foregone conclusion. So–what we want to know– is why Zelenskyy didn’t take steps to avoid the tragedy before it unfolded?

The answer to this question helps to reveal ‘who Zelenskyy really is’.

Finally, why was so intent on doing the things that he knew would anger Moscow and increase the likelihood of a war?

These questions are not hard to answer.

Zelenskyy has been acting on orders from Washington from the get-go. We know that. He’s also been implementing Washington’s agenda not his own and certainly not Ukraine’s. We know that, too. But that does not absolve him from responsibility. After all, he is a full-grown adult capable of distinguishing between right from wrong. He knows what he’s doing, and he knows that it’s wrong; worse than wrong, it’s inexcusable. He’s sending men to die in a war he knows they can’t win; he’s inflicting incalculable suffering and injury on his own people for no reason at all; and –worst of all– he’s cleared the way for the dissolution of Ukraine itself, the country he was sworn to defend. That country is going to be broken into bits as part of a final settlement with Russia, and Zelenskyy will share a good part of the blame.

How does a man like this live with himself?

Michael Whitney, renowned geopolitical and social analyst based in Washington State. He initiated his career as an independent citizen-journalist in 2002 with a commitment to honest journalism, social justice and World peace.

He is Research Associate of the Centre for Research on Globaliozation

The original source of this article is Unz.com

Joseph Biden, a Champion of Human Rights?/ By Manlio Dinucci

Al-Qaeda and the “War on Terrorism”/ By Michel Chossudovsky