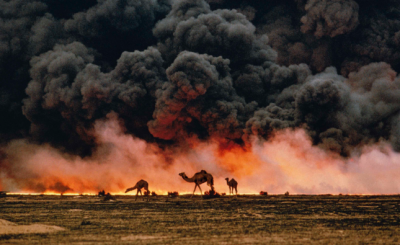 The Project for a New Middle East[1] is a Project for a New Holocaust.  It is happening now.  The policy of “Creative Chaos”[2] underpins the holocaust.  Empire willfully destroys the sovereignty and territorial integrity of prey nations such as Libya, Iraq, Syria, Ukraine, and beyond. Genocidal ethnic cleansing, mass murder and destruction are described benignly as “chaos” and as “creative”.

Empire deploys meticulously planned strategies to fabricate sectarian and ethnic divides, and to balkanize prey nations. The notion, as expressed by Condoleeza Rice, that the Middle East should be divided into a “Sunni Belt” and a “Shia Belt”[3] objectifies peoples, diminishes their humanity, turns them into fictional “stock characters” defined exclusively by perceived religious affiliations, and deliberately fabricates ethnic and religious tensions, all of which serve as preconditions for imperialists to create chaos and the disintegration of strong nation-states into fractious vassal states, devoid of self-determination and sovereignty.

Empire sees non-compliant, self-governing, secular, pluralist, multi-confessional, democratic states as enemies. Syria is all of the above, and therefore an “enemy”. Empire further destroys the “host” when it “opens the veins” of prey countries for resource plundering and criminal occupation. The oil-rich, strategically-located area East of the Euphrates is one such example.

When Empire supports the SDF against ISIS, it is polishing its fake image by creating the perception that it opposes ISIS, even as it re-introduces “rebadged” ISIS into the same battle grounds. Alternatively, as in the case of Raqqa, Empire “rescues” and redeploys ISIS elsewhere. Both terrorists and civilians are expendable in these demonic operations.

Empire rounds civilians up in terrorist-controlled concentration camps[4]. It “weaponizes” them by deliberately creating conditions of desperation which lend themselves to recruiting opportunities for new terrorist proxies. Daesh will never disappear as long as Empire is in control or seeking control globally.

As long as Western war propaganda remains ascendant, and Western populations remain oblivious, Westerners will continue to believe that these wars are humanitarian or in their national interests. In fact, the wars are anti-humanitarian, and they only represent narrow “special interests.”

NATO’s strongest weapon is its apparatus of “Perception Management”.  Without it, NATO and the imperialists would be exposed as the Supreme International War Criminals that they are.

Video: “The CIA has been developing Fascists in Ukraine for 70...

Colin Powell and the “The Sloppy Dossier”: Plagiarism and “Fake Intelligence”...