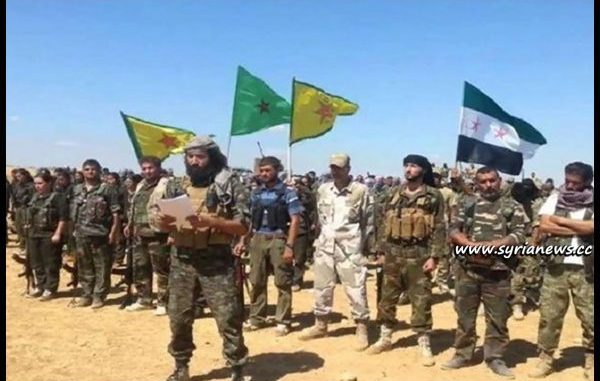 The Russian MoD added: Der Ezzor is the key battle at this phase of the long war in Syria since March 2011, and with the advances of the Syrian Arab Army and its allies, which liberated about up to 85% of Der Ezzor from the terrorist Islamic state control, other powers like the United States of America, Israel, and their backed militants are in a bad situation.

The proxy war they were running by using ‘rebels’ once and the so-called ISIS (ISIL, IS, Daesh) at other times is now a failed war for them. The Russian Ministry of Defence revealed aerial images showing that the US-led coalition has located special forces and equipment like Hummers and armored vehicles in the North of Der Ezzor where ISIS militants deployed.

Moreover, these American bases have no guards, which mean that the US coalition is safe within ISIS strongholds and they are not a threat to them. And these American vehicles and their armored tanks are being used to support the advances of the so-called Syrian Democratic Forces in the town Der Ezzor!

And here in the Euphrates east bank, along with ISIS, we remember the reportedly attack by the US-led the coalition on Syrian soldiers depots in Der Ezzor, however, we never heard that the US coalition destroy any ISIS site. Instead, they were paving the way for them to attack the Syrian Army!

Here is the Russian MOD statement and the satellites date is in 8_12 September 2017: ‘Facing no resistance from the ISIS militants, the SDF units are advancing along the left shore of the Euphrates towards Der Ezzor.’ the statement reads. ‘Despite the fact that the US strongholds are being located within the ISIS areas, no screening patrol has been organized by them.’ said the Russian Ministry of Defense.

Dr. Bouthaina Shaaban, the Syrian Advisor of President Bashar al-Assad, In an interview to Lebanese Al-Manar TV declared ‘the SDF controlled sites of ISIS without any fighting, sounds like they are hand in glove. And they control the oil-rich areas)! And to know more about those SDF agenda it’s enough to see how they raised up the Israeli flag at Erbil, Iraq. As for Syria the YPG/ separatist Kurds, they carried the terrorist flag of the French mandate in Syria and later on the radical Islamist state held ISIS flag along with their flag!”

More on Der Ezzor final battle against terror and the separatist Kurdish militias, the US special forces and the ISIS terrorist organizations’ collusion check: Deir Ez-Zor: Preparing For Daesh’s Defeat.

President al-Assad: Elections are historic stage written by our people through...

Libya And The Lies Of Empire, February, 2015