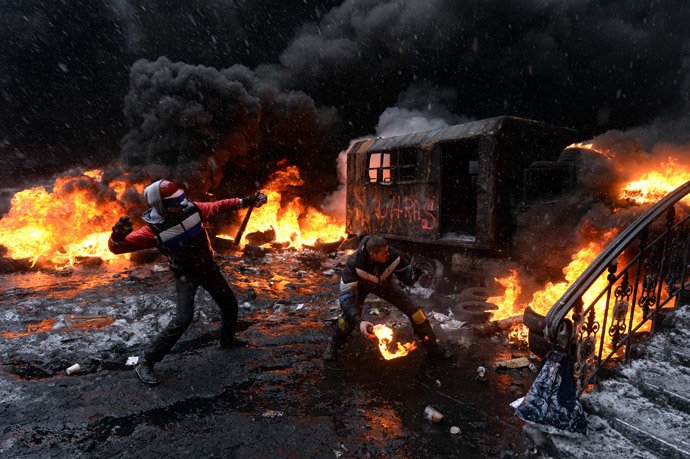 In the midst of turmoil and controversy, it is useful to review the most important preceding events and analyze how did this happen. Following are some key events and historical facts leading to the current crisis in Ukraine.

Fact 1. In February 2014, a coup overthrew the Ukrainian government which came to power in an election certified by the OSCE (Organization for Security and Cooperation). The president, Viktor Yanukovich, was forced to flee for his life.

This situation was presciently analyzed  at the time by Seumas Milne who wrote,  “The attempt to lever Kiev into the western camp by ousting an elected leader made conflict certain. It could be a threat to us all.”

Fact 2. The coup was promoted by United States officials. Neo-conservatives such as Victoria Nuland and John McCain actively supported the protests. As confirmed in a secretly recorded phone call, Nuland determined the post-coup composition weeks in advance. Later, Nuland bragged they spent $5 billion in this campaign over two decades. Before the coup was “midwifed”, Nuland forcefully rejected a likely European compromise agreement which would have led to a compromise government. “F*** the EU!”,  she said. Nuland managed the coup but Vice President Biden was overall in charge. As Nuland says in the phone call, Biden would give the ultimate “atta boy” to the coup leaders. Subsequently, Joe Biden’s son personally benefited from the coup. Victoria Nuland has even more power now as the Under Secretary of State for Political Affairs. Secret US forces such as the Central Intelligence Agency must also be involved.

Fact 3. The coup government immediately acted with hostility toward its Russian speaking citizens. Approximately 30% of Ukrainian citizens have Russian as their first language, yet on the first day in power, the coup regime acted to make Russian no longer an official state language. This was followed by more actions of hostility. As documented in the video “Crimes of the Euromaidan Nazis”, a convoy of buses going back to Crimea was attacked. In Odessa, over thirty  opponents of the coup government died when they were attacked and the trade union hall set afire.

Fact 4. During World War 2, there were Nazi sympathizers in western Ukraine when the Germans invaded the Soviet Union.  This element continues today in the form of Svoboda and other far right nationalist parties. The Ukrainian government has even passed legislation heroizing Nazi collaborators while removing statues honoring anti-Nazi patriots.  The situation was described three years ago in an article “Neo-nazis and the far right are on the march in Ukraine”.  The author questioned why the US is supporting this. Under President Poroshenko (2014 to 2019) nationalism surged and even the Orthodox Church split apart.

Fact 5. The secession of Crimea, Donetsk and Luhansk are a direct result of the 2014 coup. In Crimea, a referendum vote was rapidly organized. With 83% turnout and 97% voting in favor, Crimeans decided to secede from Ukraine and re-unify with Russia. Crimea was part of Russia since 1783.  When the administration of Crimea was transferred to the Ukraine in 1954. they were all part of the Soviet Union. This was done without consulting the population.

Author’s note: I visited Crimea in 2017 and talked with diverse people including the popularly elected city council officials. There is no doubt about the overwhelming support for re-unification with Russia.

In the provinces of Luhansk and Donetsk on the border with Russia, the majority of the population speaks Russian and had no hostility to Russia. The Kiev coup regime was hostile and enacting policies they vehemently disagreed with.  In spring 2014,  the Luhansk and Donetsk Peoples Republics declared their independence from the Kiev regime.

Fact 6. The Minsk Agreements of 2014 and 2015 were signed by Ukraine, Ukrainian rebels, Russia and other European authorities.  They were designed to stop the bloodshed in eastern Ukraine and retain the territorial integrity of Ukraine while granting a measure of autonomy to Luhansk and  Donetsk. This is not abnormal; there are 17 autonomous zones in Europe. These agreements were later rebuffed by the Kiev government and Washington. This led to the decision by Russia on 21 February 2022 to recognize the Peoples Republics of Donetsk (DPR) and Luhansk (LPR).

US intervention, both open and secret, has been a major driver of the events in Ukraine. The US has been the major instigator of the conflict.

Rick Sterling is a journalist based in the San Francisco Bay Area. He can be contacted at rsterling1@protonmail.com.

Signing of treaties on accession of Donetsk and Lugansk people’s republics...