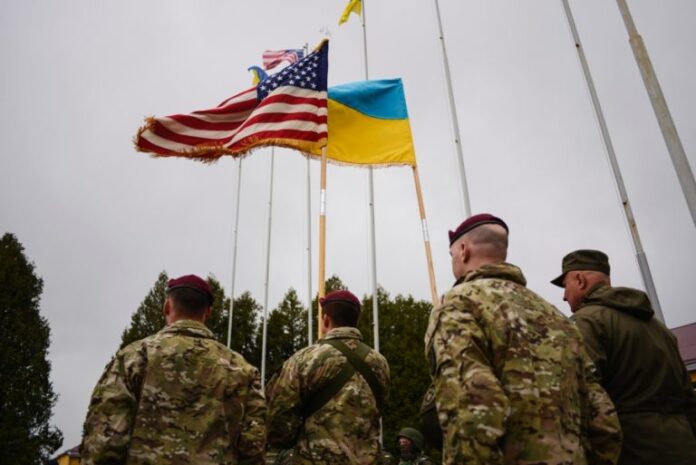 Soldiers in war gear and armored fighting vehicles have been deployed by Sweden on Gotland, the island in the Baltic Sea 90 km from its eastern coasts. The Ministry of Defense declares that it has done so in order to defend the island from threatening Russian landing ships crossing the Baltic Sea. Thus Sweden also contributes, as a partner, to the frantic US-NATO campaign which, inverting reality, presents Russia as an aggressive power preparing to invade Europe.

130 km east of Gotland, Latvia is on alert, together with Lithuania and Estonia, against the invented enemy that is about to invade. As a “defense against the Russian threat”, NATO has deployed four multinational battalions in the three Baltic republics and in Poland. Italy participates in the one in Latvia, with hundreds of soldiers and armored vehicles.

Italy is also the only country that has participated in all NATO “air police” missions, from bases in Lithuania and Estonia, and the first that has used F-35 fighters to intercept Russian aircraft in flight in the international air corridor over the Baltic. The F-35 and other fighter jets, deployed in this region close to Russian territory, are aircraft with dual conventional and nuclear capabilities.

However, the three Baltic republics do not feel sufficiently “protected by NATO’s enhanced advanced presence.” The Latvian Minister of Defence, Artis Pabriks, has requested a permanent US military presence in his country: the US forces – experts explain according to a Hollywood-movie scenario – would not be in time to arrive from Germany to stop the Russian armoured forces that, after having overwhelmed the three Baltic republics, would cut them off from the European Union and NATO, occupying the Suwalki corridor between Poland and Lithuania.

READ MORE: The Ukrainian Powder Keg and the Fuse

Ukraine, a partner but in fact already a member of NATO, has the role of the first actor as a country under attack. The government denounces, on its word of honor, that it has been hit by a cyber attack, attributed of course to Russia, and NATO rushes, together with the EU, to help Ukraine fight the cyber war. Washington denounces that Ukraine is now surrounded on three sides by Russian forces and, in anticipation of the blockage of Russian gas supplies to Europe, is generously preparing to replace them with massive supplies of US-made liquid natural gas.

The Russian attack – informs the White House on the basis of news whose veracity is guaranteed by the CIA – would be prepared by a false flag operation: Russian agents, infiltrated in eastern Ukraine, would carry out bloody attacks against the Russian inhabitants of the Donbass, attributing the responsibility to Kiev as a pretext for the invasion. The White House does not remember that in December the Russian Minister of Defense, Sergei Shoigu, had denounced the presence in eastern Ukraine of US mercenaries with chemical weapons.

The United States – reports the New York Times – have told the Allies that “any quick Russian victory in Ukraine would be followed by a bloody insurgency similar to the one that forced the Soviet Union to withdraw from Afghanistan” and that “the CIA (secretly) and the Pentagon (openly) would resist”. The United States – recalls James Stavridis, former Supreme Allied Commander in Europe – know how to do it: at the end of the seventies and in the eighties they armed and charged the mujahidin against the Soviet troops in Afghanistan, but “the level of US military support to a Ukrainian insurrection would make appear as a trifle what we did in Afghanistan against the Soviet Union”.

What Washington’s strategic design is evident: to precipitate the Ukrainian crisis, deliberately provoked in 2014, to force Russia to intervene militarily in defense of the Russians in the Donbass, ending up in a situation similar to the Afghan one in which the USSR got bogged down. An Afghanistan inside Europe, which would cause a permanent state of crisis, to the benefit of the U.S., which would strengthen its influence and presence in the region.

Featured image is from Stars and Stripes

Ukraine and the Orwellian “Ministry of Truth”: The Attack Was Launched...

Was Afghanistan a “Staged Handover?”/ Commentary by Fares Shehabi