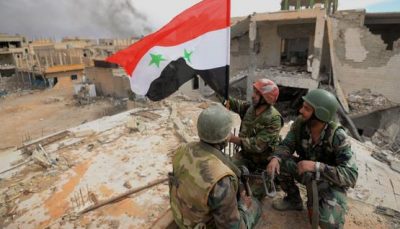 Mark Taliano, Research Associate of the Centre for Research on Globalization (CRG) contacted Global Research from Damascus at the outset of the bombings. Here is his incisive report:

Reportedly, 103 missiles were launched, of which Syrian forces destroyed 71. Bombs landed in about four different locations, including Homs, Mesyaf, and Damascus.

Russian, Iranian and Hezbollah assets were not targeted.

The aforementioned imperialists and their bombs murdered four Syrian civilians.

Additionally, just after the attack, “ISIS” launched an attack from the Yarmouk camp, located 8 kilometers from the center of Damascus.

Apparently the missiles struck a “teaching laboratory”. Presumably this will play a role in transitioning from an original “Assad gassing his own people” narrative – devoid of evidence and ridiculous — to a new narrative, with a view to justifying that which can not be justified.

The US led attacks were not authorized by the UN Security Council, and they certainly were not carried out in self-defense.

If Supreme International War Crimes are a “dirty game” then President Trump is losing.

In the following video, Syrian Abdul Razzak Homsi describes the strength that is the mosaic of Syrian society, a society whose ancient foundations are a cradle of civilization and religion – including the West’s civilizations and religions. This interview was recorded on the morning of April 14th in Damascus

Mark: how do you and other Syrians interpret the attack from last night? Is it a victory or a defeat?

Man: and this war is a dirty game and this last play of the dirty game I hope it’s the last game but Syrian people this morning consider this attack is a victory for Syria and they consider Trump is a big loser.

Mark: what should North American people do knowing that Trump is attacking Syria which includes our as civilizations roots?

Man: it’s a big mistake. They destroy all the civilization in the world and also they want to destroy only one secular country in the Middle East “Syria”. We are not living together we are one family Christian, Muslim and Jews. One family. Go to any restaurant, go to the street you can see all together we are all together as one family. So I hope they will stop this game. I have nothing about Trump I consider Trump nothing he’s on the stage but who is  behind him? So I repeat my message to American and Canadian and all the people in the Western countries. Stop this game! We don’t deserve that. We didn’t kill any American any Canadian any French any English. So stop this game. Why are you killing my children? Just for money? From Ben Salman that sick prince! Saudi prince. So stop that. Money instead of blood! It’s not fair!

Mark: what should North American people do they don’t always agree with their government?

Man: go to the street and ask your government to stop this game! No advantage for any American for any Canadian! No advantage! For some corrupted governments employed by money to destroy different, to destroy Libya to destroy Iraq to destroy Yemen to destroy Afghanistan and now they CANNOT destroy Syria. Because they don’t understand Syria and Syrian people now are stronger. And even Mr. President today more popular. If their main target to move our president he is more popular so they repeat their mistake, they made a big mistake by this target.

Mark:  a lot of imperialists like to divide and conquer. Are Syrians are all together? All religions all people of different religious denominations they are one as community a secular government?

Man: one family as I said. And please go now to any street ask any Syrian about that question. As a Syrian citizen as I said we’re still one family. Jewish people, Christian people, Muslim people, my family. I’d love to protect Jews, Christians, Muslims because my family three of this mosaic.