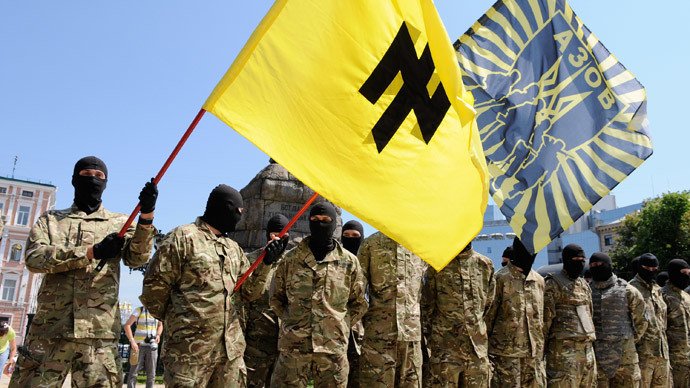 The truth, loudly proclaimed, and widely accepted, would go a long way to securing peace in Ukraine.

Anything else will lead to more misery.

Here are some truths:

The crisis started in 2014 with the “neoliberal, neo-Nazi” (1) Washington-led coup which unseated the elected president of Ukraine, Viktor Yanukovych, who subsequently fled the country.

The coup indelibly changed Ukraine’s present and future. Parliamentary President Andriy Parubiy, co-founder in 1991 of the Ukraine National Socialiat Party, on the model of Hitler’s National Socialist Party, initiated an ammendment to Ukraine’s constitution, to enter officially into NATO (a red-line for Moscow) and the EU.

On 7 February, under President Petro Poroshenko, the Kiev parliament approved the ammendment by a vote of 34 to 35 with 16 abstentions. (2)

A controlling neo-Nazi ideology of intolerance, racism, and hatred has prevailed in Ukraine since the coup, with neo-Nazis well-ensconced in positions of power, including the police, the military, the government, and its institutions. (3)

Current President Zelensky has proven himself either unable or unwilling to “denazify” the country or to abide by Minsk Agreements and end the war against Russian-speaking populations in the East of Ukraine. Ukrainian forces have targeted and destroyed this region for eight years. (4)

President Putin and most Russians have not forgotten the Nazi invasion of the USSR and the ensuing loss of some 27 million people, nor have they forgotten the intolerance and racism foundational to the Nazis’ mass-murder of Jews and others deemed unfit to live.

Iraq did not have Weapons of Mass Destruction, but Ukraine surely does, with its Washington-funded biolabs and its military infrastructure, and Ukraine is right on Russia’s borders. Former US congresswoman Tulsi Gabbard has admitted that there are “25+ US-funded biolabs in Ukraine”, and State Department official Victoria Nuland, by stating that Russia will be held responsible for any “biological or chemical weapon attack”, has inadvertently revealed that the biolabs are developing biological weapons. (5)

What if Russia installed a proxy government on the US border, complete with biolabs, missile systems, and hostile extremists?

If the Lie prevails, and the Nazis are white-washed, if the threats to Russia’s national security are ignored, then war and disaster will also prevail. Whereas truth leads to Peace, war lies and ignorance, a steady Western diet, can only lead to more evil.

Given Ukraine’s proximity to Russia, its de facto alliance with NATO (6), its military aggression against its own people, its biolabs and its Nazism, Russia’s Operation Z, and Putin’s stated aim to denazify and demilitarise Ukraine can be better understood, and accepted.