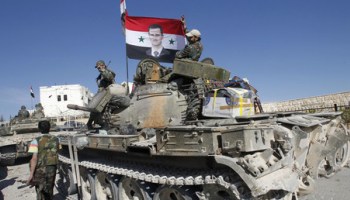 As we strive for Peace and Justice, all we have is the Truth.  The mechanisms of International Law will not deliver Justice in the foreseeable future since Western countries and their allies have been, and continue to commit Supreme International Crimes as policy with relative impunity.  Iraq[1] and Libya[2], for example, were destroyed, and the Western perpetrators flaunt their impunity for their crimes, beneath veils of lies, to this very day.

Western perpetrators of the current overseas holocaust continue to make a mockery of International Justice, as the corpses accumulate.

The lies about the war on Syria have been unprecedented. Western powers and their agencies have shown complete disdain for the truth, and for evidence-based facts.  Despite this, there still remains a reasonable expectation for Peace and some form of Justice. Syria has strong institutions, strong allies, and Syrians themselves have demonstrated remarkable resistance and tenacity in overcoming overwhelming odds.  Despite over 7 years of war, and terrorists from as many as 100 countries arrayed against her, Syria remains strong and ascendant.

Despite the lies, the fake “NGOs”, the fake humanitarians, and the fake covers for the most heinous crimes imaginable, the truth emerges every time areas are liberated.

The Truth is shouting at this very moment, for all who care to listen. As hostages are being released, “Repentance Jails” are emptying, and freed captives are rejoicing, real, primary source evidence is emerging, and it tells a story that contradicts State Department lies and MSM fabrications.

In the video documentary below, Tom Duggan shows us the mortars, the missiles, and the poison gas that Western-supported terrorists have been making and using against civilians in Damascus since 2012.[4]Western-supported terrorists have murdered some 11,000 innocent Damascus citizens and “permanently disabled” another 30,000 with these weapons of war.

These videos demonstrate the lie of the “humanitarian intervention” meme, and they demonstrate the contemptible criminality of our governments and our media as they continue to support terrorists whom they falsely claim to be fighting in their fraudulent “War On Terror.”

Syria: The Quest for Truth and Peace in the New Year