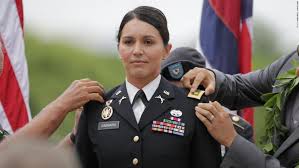 The biggest and most powerful Al Qaeda enclave in the world today is in Idlib, Syria. Brett McGurk the former US special Envoy for the war against ISIS who served under both the Obama and Trump administrations described Idlib province is the largest Al Qaeda safe haven since 9/11.

Operation Inherent Resolve’s Colonel Myles Caggins said: “Idlib province seems to be a magnet for terrorist groups especially because it’s an ungoverned space in many ways and there are a variety of groups there. All of them are a  nuisance, a menace and a threat to the civilians. The hundreds of thousands of innocent civilians who are just trying to make it through the winter and searching for hope and will to live and survive.”

Yet our corporate media refers to these Al Qaeda terrorists as rebels and wants to protect them, so here’s the simple question to President Trump and to all the Democratic candidates running for President:

Do you want to protect this Al Qaeda stronghold in Idlib, Syria or defeat them? Voters have a right to know.