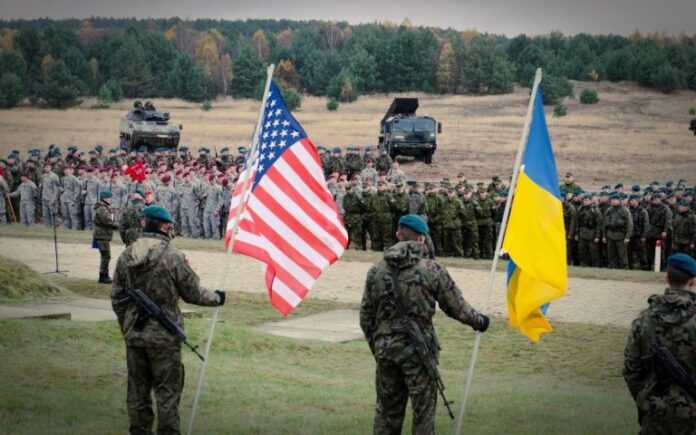 While Ukraine continues to go against Western rhetoric about Russia’s future “invasion” of the country in order to save what can be saved of its economy, the Ukrainian army and Ukrainian neo-Nazi battalions continue their preparations for an offensive against the Donbass, with the help of American mercenaries.

While the Ukrainian authorities are trying to calm down their population in order to avoid an economic collapse, against the background of the failure of the negotiations between Russia and the United States, as well as between the political advisors of the Normandy Format countries, in Ukraine, the preparations of the Ukrainian army and neo-Nazi battalions for an attack on the Donbass continue with the help of Western countries and American mercenaries.

Thus, the spokesman of the DPR (Donetsk People’s Republic) People’s Militia, Eduard Basurin, announced that the Ukrainian General Staff, under the guidance of American advisers, is finalizing a plan of offensive in the Donbass. The moment of the beginning of the aggression against the People’s Republics will be finally determined after the completion of the formation of the offensive groups and the approval of the operation plan by the National Security and Defense Council of Ukraine.

And while the plan of the offensive is being finalized, the consolidation of Ukrainian army units in the Donbass continues. The command of the AFU (Armed Forces of Ukraine) plans to transfer to the conflict zone in the east of the country three additional brigades – the 72nd mechanized brigade, the 10th mountain assault brigade and the 80th airborne assault brigade, which are considered to be the most combat ready in the Ukrainian army and capable of offensive actions.

These brigades have been fully staffed with personnel, weapons, military equipment and ammunition and have completed their combat preparation. It should be noted that the units of the 80th Airborne Assault Brigade completed their training at the Staritchi training center in the Lvov region. The brigade was trained there in urban combat by instructors from the United Kingdom as part of the Orbital training mission. It is possible that these paratroopers will be deployed in assault groups to clear large cities such as Gorlovka or Donetsk.

The grouping of these brigades is confirmed by the fact that the management of Ukrainian Railways has received instructions from the Ministry of Defence to deliver trains with platforms and wagons to the loading stations of Belaya Tserkov, Kolomyia and Lvov from February 3 to 10, in order to transport weapons, military equipment and personnel of the 72nd, 10th and 80th brigades.

It is also by train that fuel, lubricant and ammunition to replenish the reserves of the troops of the 25th, 36th, 53rd, 54th, and 56th brigades of the AFU arrive in the Ukrainian-controlled Donbass. These trains unloaded their cargo at the stations of Krasnoarmeysk, Druzhkovka, and Zachatovka.

In order to prevent OSCE SMM (Special Monitoring Mission) patrols and local residents from discovering this fact, the commanders of these units were ordered to unload and transport fuel and ammunition to the brigade depots at night, via country roads. In addition, the brigade commanders were instructed to prepare field storage facilities for ammunition at a distance of 15-20 km from the line of contact.

Military field hospitals near Konstantinovka, Kurakhovo, Volnovakha and Mariupol, urgently return patients undergoing treatment to their duty stations for outpatient treatment. Military hospital commanders have been instructed to prepare storage locations for blood donations and to be ready to deploy additional beds. Medical personnel were trained in the deployment and operation of casualty reception and triage points.

According to the information of the DPR intelligence services, the leaders of the military-civilian administrations of the Donetsk and Lugansk regions were ordered to update the plans for the evacuation of people living in the frontline settlements, and also to check the vehicles and facilities intended for the transportation and accommodation of evacuees.

DPR intelligence sources have also noted an increase in the activities of Ukrainian neo-Nazi organizations. In the recruitment points in the cities of Kharkov, Belaya Tserkov, Kherson and Dnipropetrovsk, fighters are recruited from among Ukrainian citizens who have experience in combat operations in the Donbass in order to provide training for other recruits.

In Sumy, the neo-Nazi organization Corpus National has established a military training camp run by neo-Nazis who fought in the Donbass in the summer of 2014. According to some reports, instructors from the American mercenaries companies Forward Survey Group and Academi are also involved in training fighters.

The neo-Nazis have also established cooperation with volunteer organizations to provide their fighters with protective gear, tactical uniforms and medical kits. A fundraising campaign has also been launched to purchase vehicles and equipment for the neo-Nazi assault groups.

As can be seen the preparations of the Ukrainian army and neo-Nazi battalions to conduct an offensive against the Donbass continue, while Ukraine officially complains about the American hysteria about the military situation, and declares that the invasion of the country by Russia is not for tomorrow.

Faced with this situation, the Union of Donbass Volunteers, based in Russia, began to form units to take part in the defence of the DPR and LPR (Lugansk People’s Republic) in case of an attack from Ukraine.

“We confirm the statement of the DPR people’s militia. Through the channels of the Union of Donbass Volunteers, we have also received information confirming the fact that Ukraine is preparing for a large-scale aggression using prohibited weapons against the Donbass republics. In this regard, the Union of Donbass Volunteers declares that we will not stay away from these events. Russian volunteers have started to form units to take part in the defence against Ukrainian aggression, should it occur. We are currently completing the processes of training the command and staff of Russian volunteers and are ready to act to defend the People’s Republics against the aggressive actions of the criminal Ukrainian side,” said Andrei Pinchuk, the head of the Donbass Volunteer Union.

A measure announced, while today the Ukrainian army opened fire with heavy machine gun against the village of Yasnoye, in DPR, damaging a residential building, but fortunately without causing casualties among civilians.

The original source of this article is Donbass Insider

Ukraine, Russia and the repercussions for Syria/ By Vanessa Beeley