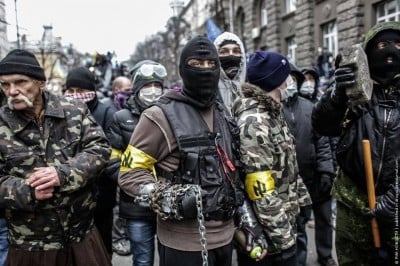 t all started on March 5, 2014: a US sponsored fascist coalition government under the disguise of democracy was installed in Ukraine.

With historical foresight this article by Felicity Arbuthnot was first published on March 15, 2014 in the immediate wake of the US sponsored EuroMaidan Coup d’état.

According to Itar-Tass (6th March 2014) they had drawn Yatsenyuk’s ire by expressing:

A contact of the publication stated that one of the three had also:
.

“told Yatsenyuk that actions of today’s Kiev authorities in overtures with radical nationalist organizations would destroy national unity” and that it was simply: “harmful to involve the state military agency in such dangerous games.” Their stand resulted in “management reshuffles” – in the country in which Assistant Secretary of State Victoria Nuland has stated that the US has invested $5 Billion: “in the development of democratic institutions and skills in promoting civil society and a good form of government.”(1) 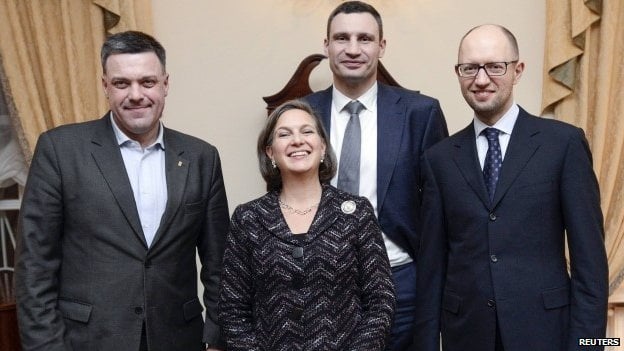 So far US multi-billion democracy-building via the man of whom Nuland opined to the US Ambassador to the Ukraine, Geoffrey Pyatt: “I think Yats is the guy …”(2) has all the hallmarks of becoming a mirror of the historic tragedies in Afghanistan, Iraq, Libya and being plotted via further humanitarian horrors committed by their proxies in Syria.

Additionally the Nobel Peace Laureate American President appears to have reignited the Cold War, laid to rest with such joy across the world as the Berlin Wall fell just over twenty four years ago, on the 9th November 1989.

However, if the US Administration’s choice as a democratic Prime Minister is scarily woeful, the man who would be President, Dmitry Yarosh, is nothing short of astonishing. As Julie Levesque has written in a meticulous, jaw dropping article: “Dmitry Yarosh, leader of the Maidan Brown Shirts (is) on an international wanted list and charged with inciting terrorism.

“Under the new government, Yarosh is leader of the Neo-Nazi Right Sector delegation to the Ukraine Parliament. His close friend and political partner Andriy Parubiy co-founder of the Neo-Nazi Social-National Party of Ukraine (subsequently renamed Svoboda) was appointed by the new government to the position of Secretary of the National Security and National Defense Committee (RNBOU), a key position which overseas the Ministry of Defense, the Armed Forces, Law Enforcement, National Security and Intelligence. Right Sektor leaders Yarosh was appointed to the number two position at RNBOU.” 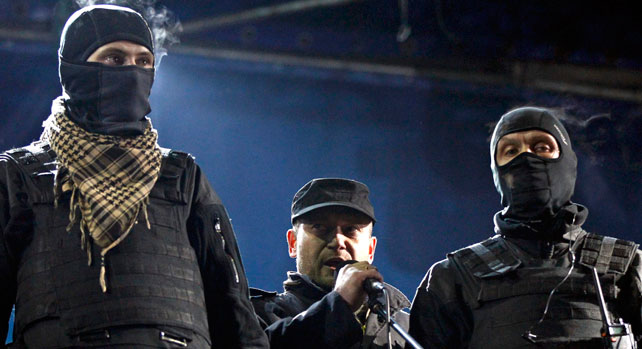 The answer would appear to be a rapidly accelerating affirmative, with Robert Parry stating that Neo-Nazis are now in charge of four Ministries and:

“some ten ‘oligarchs’ mostly run the show in shifting alliances, buying up media outlets and politicians, while the vast majority of the population faces a bleak future, which now includes more European-demanded ‘austerity’ …”(4)

Meanwhile the stand-off over the Crimea continues. Train tickets between Kiev and Crimea have been suspended by the latest government shoehorned in to the latest “new democracy.”
.
In neighbouring Russia, as the Sochi Paralympics opened with a spectacular ceremony, President Obama, Prime Minister Cameron, Chancellor Angela Merkel and their parties hurled their collective toys from their prams and failed to attend. Another chance to make peace not war in what should be the Olympic spirit, also willfully thrown away.
.
The opening theme was “Breaking The Ice,” and “the importance of breaking down barriers and stereotypes …” a popular 1990’s Russian song called “Good-bye America” played as the Russian team closed the parade.
.
However for all the US posturing, Gallop shows President Putin’s popularity rating at a consistent 67.8% an endorsement of which his American counterpart could only dream, fluctuating between 38% to 42%.
.

As this ends news comes through that the US is to send fighter jets and personnel to Poland and Lithuania by Thur day, the US Navy destroyer, the USS Truxton, one of the largest destroyers ever built for the US Navy, has crossed in to the Black Sea for “exercises” with the Bulgarian and Romanian navies (5) there are mass protests in the south and east of Ukraine about the “self proclaimed” government in Kiev and America has unleashed a possible World War Three.

Somebody in the Nobel Peace Prize Committee, please demand the return of that ill awarded Peace Prize.

Related Articles
“Democratization” and Anti-Semitism in Ukraine: When Neo-Nazi Symbols Become “The New Normal”
Apr 1, 2022
The CIA May be Breeding Nazi Terror in Ukraine
Sep 1, 2022
Selected Articles: Why Donald Trump Will Soon be Indicted
Sep 1, 2022
US Tightening Its Neocolonial Grip Over Ukraine
Aug 30, 2022
Baghdad Is in Chaos After Almost 20 Years Since the US Invasion
Aug 30, 2022
A Death in Moscow. Who is Darya’s Father, Philosopher and Sociologist Aleksandr Dugin
Aug 29, 2022

Who’s Who in Ukraine’s New “Semi-fascist” Government: Meet the People the U.S. and EU are Supporting 8 March 2014