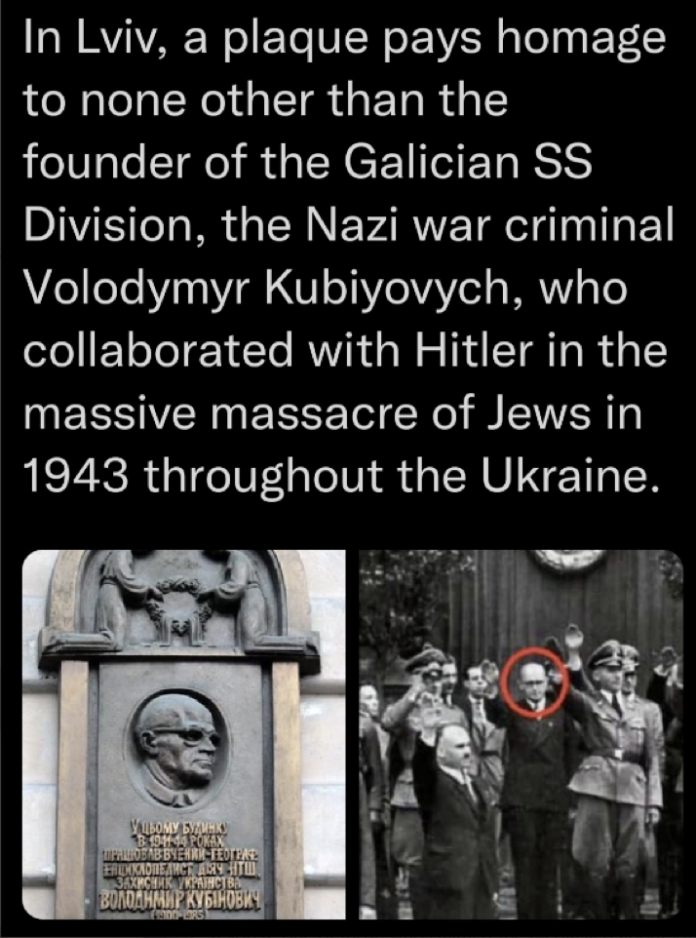 We have already shown the extent of Nazism in the Ukraine’s armed forces. This post will demonstrate the extent to which Fascism/National Socialism (Nazism) have been and are an integral part of Ukrainian civilian life.

There is no better evidence of institutional Nazism in Ukraine than the education of its youth. The Azov battalion has its youth movement called the Azovets

Here is a photo from Russia’s “Life News” on May 13th, 2015 “Soldiers of ‘Azov’ Teach Students to Shoot a Grenade Launcher and Throw Grenades”:

That “wolfsangel” insignia on their T-shirts is Ukraine’s version of the German Nazis’ original. Perhaps Boris Johnson would like these allies of his to lecture in British schools?

One of the towns taken by Russian forces in recent days was Berdyansk where a call centre used to scam Russian Ukrainians was exposed. The large Swastika over the doorway is clear enough!

There is of course the Zelensky myth repeated ad nauseam by American and European propaganda that you can’t be Jewish and a Nazi so Ukraine is not Nazi! – as if the Nazis’ hatred of and extermination of Russians, Poles, Serbs (all Slavs regarded by German and Ukrainian Nazis as “sub humans”) and Roma did not matter and only the anti semitism made them Nazis! There were in fact 150,000 Jews who served in the Nazi army, including the part Jewish former Chancellor of Germany Helmut Schmidt!

Consider this openly racist attack on Russians by a modern commentator on German mainstream media:

The words of Florence Gaub on the Markus Lanz programme on ZDF (German equivalent of ITV in the UK). This German television interview managed to show extreme stupidity, racism and bankrupt “intellectualism” in one individual who was nevertheless given mainstream media coverage! Will the BBC now invite her?

President Zelensky saw nothing wrong with allowing to address the Greek Parliament a member of the openly Nazi Azov Battalion who was of Greek origin. (In fact he has since  been killed in Mariupol)

Even a Greek government spokesman Giannis Oikonomou said on Twitter following the session that “To include a message from an Azov Battalion member was wrong and inappropriate,” and Alexis Tsipras the SYRIZA party leader – Greece’s main opposition party – protested:

“The speech by members of the neo-Nazi Azov Battalion in the Greek Parliament is a challenge. The absolute responsibility lies with the prime minister. He spoke of a historic day, but it’s a historic shame. Solidarity with the Ukrainian people is a given. But the Nazis cannot have a say in parliament,”

In fact of course the responsibility did not lie with the Greek PM but with Zelensky. But none of this should come as a surprise given the institutional recognition of Nazis in public life in Ukraine. Andrei Biletsky the former leader of the Azov battalion became the leader of the Patriot of Ukraine party and was an MP between 2013 and 2019. His fellow party member, Vadym Troyan who served as a deputy commander of Azov, was appointed police chief of the province of Kiev.

Biletsky is an open admirer of Hitler and claimed that

“Social Nationalism raises to shield all old Ukrainian Aryan values forgotten in modern society. Only their recovery and implementation by a group of fanatical fighters can we lead to the final victory of European civilization”

Every 1st January Ukrainian Nazis march under torches to celebrate the birthday of Stepan Bandera the Ukrainian extreme nationalist who led the wartime movement allied with the Nazi occupiers of Ukraine: His OUN – B group called on Ukrainians to “liquidate Poles, Muscovites and Jews”. Such torchlight marches are reminiscent of course of Nazi Germany, as they are meant to be.

The extent to which the political class and people in general adopt uncritically Nazi supporting individuals, insignia and politics can be seen in the statues on public display. Imagine if there were statues in Britain glorifying the former leader of the British Union of Fascists Oswald Mosley!

In 2017 The World Jewish Congress denounced the Ukrainian city of Vinnitsa’s “disgraceful and deplorable” move to celebrate nationalist leader Symon Petliura, whose Ukrainian People’s Republic killed tens of thousands of Jews in pogroms under his leadership in 1918-1921, and urged the local authorities to pull a monument unveiled in his honour.

Anti-Nazi activist Efraim Zuroff of the Simon Wiesenthal Centre said that “Ukraine has more statues for killers of Jews than any other country.” Zuroff also attacked the Canadian Government for training Ukrainian Nazi troops. Canadian troops were photographed training members of the “Azov” regiment with at least one soldier bearing the insignia of the SS division “Galizien,” a Ukrainian unit that fought for the Nazis in WWII. Canada has reportedly spent nearly a billion dollars (US$794 million) on training Ukrainian troops since the 2014 coup.

A Ukrainian state body for historical research published nine arguments why Ukrainians and Russians cannot be called brother nations, including one that stated that Ukrainians are pureblood Slavs, while Russians count people from Ugro-Finnish tribes among their ancestors. The Ukrainian Institute of National Remembrance released a series of info cards which were were posted on its social media accounts. Some of them were later deleted, but not before being retained by web archiving algorithms.

As is increasingly the case in the former democracies in the West, the corporatist left and much of the media regard any opposition to the State “narrative” be it on Russia, COVID, Climate, the family, sexual identity or nationhood and democratic sovereignty as being “illegal” and those who propagate such alternative ideas or policies are or should be classed as criminals. So it is – in even clearer terms – the case in Zelensky’s Ukraine where his own totalitarian politics (no wonder the openly Nazi are on his side) has led to the closing of television and other media outlets and the arrest of opponents, the latest being Viktor Medvedchuk the leader of the largest opposition party. He has just been arrested yet again by the State Security Service SBU. Medvedchuk, who opposed the 2014 Kiev Maidan coup, and opposed Ukraine’s turning to the West has led his party since 2018.

When Medvedchuk’s party began to pull ahead of Zelensky’s “Servant of the people” party, Zelensky started his purge of unfriendly media and had Medvedchuk arrested for “treason”.

Another political opponent of Zelensky, businessman Vadim Rabinovich, once led a movement to remove the president. He is now officially declared “a traitor” although all he wanted was an independent neutral Ukraine.

Zelensky’s administration declared that Rabinovich was a “collaborator, pro-Russian politician” and was recently added to a blacklist of Ukrainians that includes opposition lawmakers, local politicians, journalists and bureaucrats who are allegedly “linked to”  Russia or Vladimir Putin. Several of them have been murdered since the beginning of the war. Rabinovich now lives in Israel.

With such an example from the top it is no wonder that a Ukrainian TV presenter Fahrudddin Sharafmal could call on his countrymen to destroy the Russian nation by killing their children. He even summoned up the shining example of Adolf Eichmann!

“I allow myself to quote Adolf Eichmann, who said that in order to destroy a nation, you must destroy, first of all, its children. Because if you kill their parents, the children will grow up and take revenge. By killing children – they will never grow up and the nation will disappear,”

A photo of Eichmann appeared on the screen. From hromadske TV. Well done Boris! Keep sending these people sophisticated weaponry!