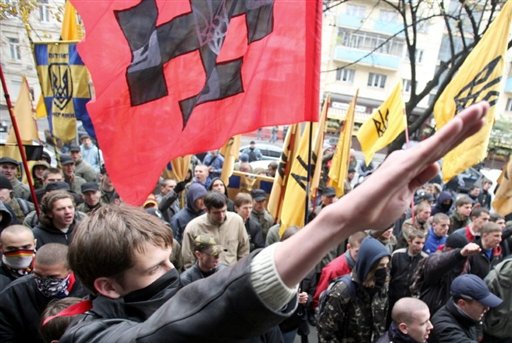 This article first published in June 2014 documents the nature of the Kiev regime which is supported by US-NATO.

What is happening in Ukraine has serious geopolitical implications. It could lead us into a World War III Scenario.

Global Research does not support Russia’s invasion of Ukraine. A  bilateral Peace Agreement is required.

Following the Kerch Strait incident, a process of militarization of the Black Sea basin is ongoing. Martial law in Ukraine has been established.

US-NATO military aid is relentlessly channelled to the Ukraine regime, a coalition government integrated by Neo-Nazis.

Most people do not realize that the Kiev regime includes a powerful Neo-Nazi faction, largely because the media never mentions it.

Andriy Parubiy who is currently president (chair) of the Ukrainian Parliament (Rada) (with executive functions within the government) is co-founder of the Neo-Nazi  Social-National Party of Ukraine (subsequently renamed Svoboda).

Andriy Parubiy is a follower of Ukrainian Nazi Stepan Bandera, who collaborated in the mass murderer of Jews and Poles during World War II.

And Neo-Nazi leader Parubiy is routinely received with red carpet treatment in Canada, the US and the European Union. And the Western media applauds.

Military aid is channelled to the Armed Forces and Ukraine’s National Guard.

The Canadian media fail to mention that the so-called defensive weapons will also be used by Ukraine’s National Guard’s Azov battalion which is under the control of the Neo-Nazi faction.

Parubiy received by the Canadian Parliament

Another element which has casually been ignored by the Western media are the Neo-Nazi Training camps for young children under the auspices of the Azov battalion of the National Guard (funded by the US and Canada).

See the Wolf Angel Nazi insignia on their T-Shirts.

Do they know who they are?

Do we know who they are?

There are “ultra-conservatives” in the Kiev government but “they are not Neo-Nazis.” According to the Western media, its all part of “a relentless Kremlin-driven propaganda offensive that uses World War II-era terms and imagery”.

Is it a loose coalition?  If a government were to officially display Nazi emblems, does that not suggest that the government is committed to Nazi ideology?

When the Kiev regime “officially” displays Nazi emblems to identify entities of their National Security and Military apparatus one would normally assume that it is a Neo-Nazi government.

Below is the Nazi emblem of the National Guard  [Національна гвардія України] which is defined as Reserves of the Ukrainian Armed Forces. They operate under the jurisdiction of the Ministry of Internal Affairs.  The National Guard is part of the so-called “Internal Troops of Ukraine.” The emblem is a stylized swastika (see below).

READ MORE: The 2014 Neoliberal Neo-Nazi Coup in Ukraine. The World is at a Dangerous Crossroads

Imagine what would happen if the US National Guard were to display swastika-like symbols.

Of significance, the National Guard of Ukraine is directly financed by the Obama administration, with a view to protecting American style democracy in Ukraine.

Unknown to the American public, the US government is channeling financial support, weapons and training to a Neo-Nazi entity.

Nobody in America knows about it because the use of the words “Neo-Nazi” and “Fascist” in relation to Ukraine is a taboo. The have been excluded from the lexicon of investigative reporting. In media reports they have been replaced by “Ultra-conservative” “Extreme Right” and “Nationalist”.

Another entity –which is part of The Ukraine National Guard– is The Azov Battalion (Батальйон Азов). The Azov Battalion -which displays the Nazi SS emblem– (below left) is described by the Kiev regime as “a volunteer battalion of territorial defense”. It’s a National Guard battalion under the jurisdiction of the Ministry of Internal Affairs.  Officially based in Berdyank on the Sea of Azov, it was formed by the regime to fight the opposition insurgency in Eastern and Southern Ukraine. It is also financed by the US administration.

These militia bearing the Nazi SS emblem are sponsored by Ukraine’s Ministry of Internal Affairs, equivalent to America’s Department of Homeland Security.

They are casually referred to as “Freedom fighters”.

Its all for a good cause. “Democracy is the endgame”.

In the words of the New York Times, “The United States and the European Union have embraced the revolution here [Ukraine] as another flowering of democracy, a blow to authoritarianism and kleptocracy in the former Soviet space.” (NYTimes.com, March 1, 2014).

It goes without saying that “support” to the formation of a government in the Ukraine with “Neo-Nazi leanings” does not in any way imply the development of “fascist tendencies” within the White House, the State Department and the US Congress.

Scroll down for Selected Images of the Azov Battalion “Freedom Fighters”

Nazis in Ukraine: Seeing Through the Fog of the Information War/By...