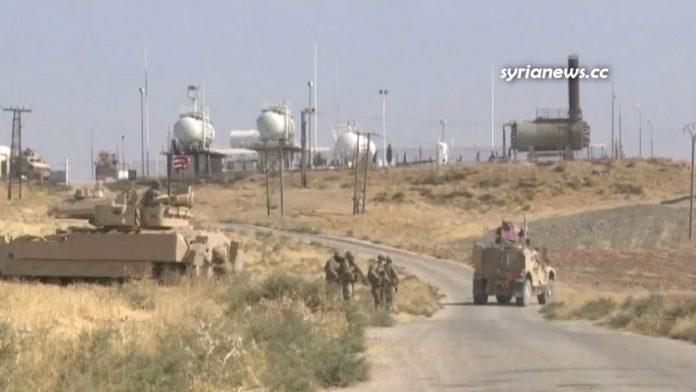 US oil thieves are getting bombed more frequently in the northeastern Syria Deir Ezzor oil and gas fields, 2 attacks within 12 hours, the Pentagon is imposing a media blackout on its casualties.

In the morning today, Sunday 11 July 2021, the US oil thieves based in the Al Omar oil field were bombed with several rockets, local sources informed the Syrian news agency SANA. Al Omar oil field is the largest oil field in Syria and is located in the southeastern countryside of Deir Ezzor, in the northeast of Syria.

The US Army built a military base within the Al Omar oil field, maybe to spread democracy and freedom in the oil field, they also occupy the housing complex in the southern part of the oil field compound.

The US pentagon and their Kurdish SDF separatist terrorist group denied the oil field was attacked today despite the sounds of explosions, sirens, and the smoke rising from the site.

Yesterday evening’s bombing of the US illegal army base in the Conoco gas field to the north of Al Omar field resulted in a fire as well, the sounds of explosions were massive and the flames were high. The pentagon’s spokesperson admitted this field was destroyed but claimed their invincible super oil thieves were not hurt.

Nobody claimed responsibility for the attacks yet, the Syrian resistance is active against the US oil thieves, their Kurdish SDF terrorists, and their buddies in ISIS.

The head of the propaganda office for the Kurdish separatist SDF terrorists, a person who goes by the name Ferhad Shami claimed that the attack on the Al Omar oil field earlier today was part of a joint military drill of his forces with their US patrons. It would be a first where a highly trained superpower army and a heavily armed terrorists group carry out a military drill which includes firing rockets on their own positions next to the most inflammable sources of natural gas fields with the widest firebases imagined!

US forces are in Syria illegally to only control oil and gas fields, steal oil and wheat depriving the Syrian people of their fuel and food, and help the separatist Kurdish terrorist groups Israelize parts of Syria. Biden’s most inclusive and diverse junta is continuing Trump’s policies which were continuing the previous Biden’s policies under Obama who started all the mayhem in the Arab world dubbed the ‘Arab Spring’ in order to create anti-Islamic emirates ruled by the Muslim Brotherhood international radical organization with its political head the Turkish madman Erdogan and their armed fighters of Al Qaeda and their religious doctrine is the Saudi Wahhabi teachings that contradict the bases of Islam.

With 4 attacks directly bombing the US oil thieves and their Kurdish SDF separatist terrorists in the oil fields in less than a month, the Biden junta should consider withdrawing their troops from Syria sooner than planned or prepare their body bags.

To help us continue please visit the Donate page to donate or learn how you can help us with no cost to you.
Follow us on Telegram: http://t.me/syupdates link will open the Telegram app.

“Voices from Syria” defending Syria in front of public opinion