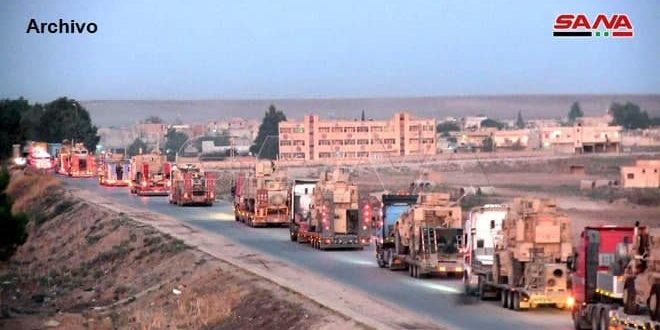 Hasakeh, Dec 19 (SANA) A convoy of the U.S. occupation forces. The US entered Syrian territory today and headed towards its illegal bases in Hasakeh province.

Activists from the town of Yarubiyah told SANA that the caravan is made up of 27 trucks loaded with logistical support materials, as well as tanker trucks, containers and refrigerators.

The column entered through the illegal Al-Walid crossing from northern Iraq and was protected by vehicles of the pro-US mercenary militia SDF, and headed for Washington’s illegal bases in Hasakeh.

On the eve, U.S. occupation troops pulled a convoy of 90 trucks with oil stolen from wells they control into Iraqi territory in cooperation with the SDF militia.