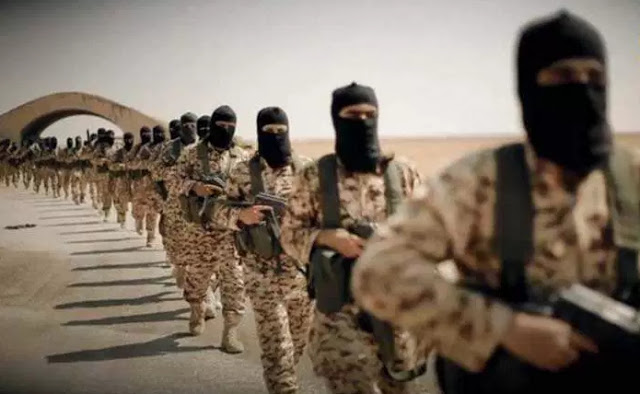 US policymakers have recently announced plans to hand over control of the Syrian city of Raqqa to former Islamic State (ISIS)-affiliated officials, Newsweek would report.

In its article, “Syria: Arab Tribes Who Once Supported ISIS Turn to U.S. As Endgame Being In Raqqa,” Newsweek reports:

A top U.S. diplomat in the fight against the Islamic State militant group (ISIS) has praised recent talks with Syrian tribal leaders slated to play a large role in governing Raqqa once the jihadis are expelled.

But the plan to create a careful balance of local power on the ground in Raqqa that will likely see former ISIS-affiliated officials ultimately in charge could cause a split between the U.S. and its Kurdish allies.

What appears to be ill-conceived policy is in fact the United States providing direct military protection to the remnants of terrorist organizations operating in Syria it has supported, including fighters of the so-called “Islamic State.”

With other foreign-backed terrorist organizations facing collapse in strongholds including Deir ez-Zor in eastern Syria – fighters funded, armed, and operating on behalf of foreign interests, including Al Qaeda, its affiliates, and even the Islamic State itself – will either need to flee the country back behind the borders of  their state sponsors – Jordan, Saudi Arabia, and Turkey – or find a safe haven in Syrian territory illegally occupied by the United States and its allies.

The northern city of Idlib is another admittedly Al Qaeda-controlled city the US and its allies are still flooding with torrents of aid, supplies, weapons, and equipment.

Idlib and Raqqa will form the remaining footholds of foreign-sponsored violence in Syria until Syria and its allies encircle and cut them off, making effective destabilization from either city difficult if not impossible.

READ MORE: US Downs Syrian Warplane over Syria Amid War on ISIS

In an effort to blunt Syria’s gaining momentum, US-ally and proxy Israel has recently threatened war with Iran if it does not remove its forces from neighboring Syria. Iran and Russia have played a key role in preserving the territorial integrity of Syria and allowing the government in Damascus to restore order to the nation’s most populous centers.

While the US currently poses as “fighting” the Islamic State, leaked 2012 documents (PDF) reveal that US policymakers and their European and regional allies sought the creation of what they called at the time a “Salafist” (Islamic) “principality” (State) in eastern Syria to “isolate” the government in Damascus.

From 2012 onward, armed militants supplied via NATO-member Turkey and US-ally Jordan would flood into Syria and Iraq and establish the so-called “Islamic State,” precisely where US policymakers sought to create their “Salafist principality.”

Supply lines from US-ally territory would fuel the Islamic State’s expansion and militant activities until the 2015 Russian military intervention which systematically targeted, disrupted, and destroyed these supply lines, allowing the Syrian army to corner and eliminate the organization in all but a handful of remaining strongholds.

Throughout the process, the US has attempted to hinder joint Syrian-Russian security operations, including both proxy and direct attacks on Syrian and Russian forces. With few options remaining, it appears the US will all but literally use its military assets illegally occupying Syrian territory to provide shelter to remaining Islamic State fighters under the tenuous guise of them having renounced their ties to the terrorist organization.

US politicians and policymakers literally lobbying for MEK terrorists.

The process of rehabilitating listed terrorist organizations into viable US proxies is a long-standing tradition in Washington.

Terrorists from the Mojahedin-e Khalq militant organization – which killed US military and civilian personnel as well as attacked civilian targets in Iran – was until recently a listed foreign terrorist organization by the US State Department. US policymakers who believed they could be armed proxies useful in violent regime change in Iran, lobbied to have the organization de-listed and even armed and funded by the United States government.

Efforts to “re-brand” Al Qaeda militants cornered in Syria’s northern city of Idlib are also underway in order to provide more direct aid and support to the militants as a means of perpetuating Syria’s deadly conflict.

With Newsweek’s latest article, it appears a similar “re-branding” campaign is now being undertaken for the Islamic State itself.

This article was originally published by Land Destroyer Report.

All images in this article are from the author.

The 2017 Raqqa Exodus: The US Coalition’s “Secret Deal” to Allow ISIS-Daesh Terrorists to Escape…

The U.S./Turkey Plan for “Seizing, Holding, and Occupying” Syrian Territory In Raqqa

11 November 2016The original source of this article is Global Research