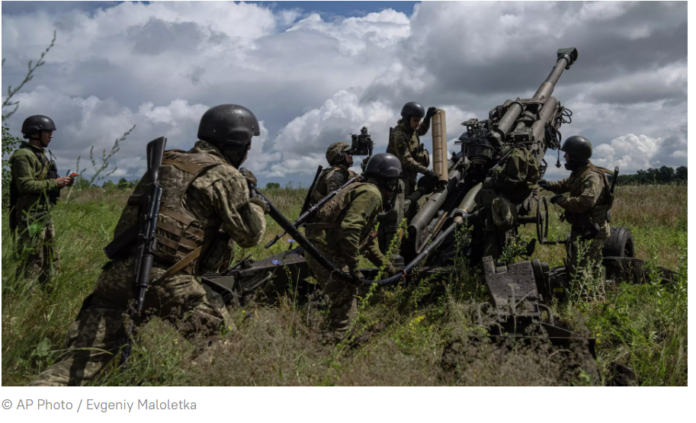 US defense officials have advised the Biden administration against supplying Kiev with the longer range missiles, known as Army Tactical Missile Systems (ATACMs), citing fears that the Ukrainian military would use these weapons against Russia thus expanding the conflict, according to NBC News.
“I believe that if the Ukrainian government acquired long-range missiles, they would use them against the territory of the Russian Federation. I think that’s a decision they’ve already indicated that would take place. So it’s not a question of ‘would they do it?’ the question is: ‘Are they going to be provided with the means to carry out this intention?'” says Scott Ritter, a military analyst and former US Marine Corps intelligence officer who served in the Persian Gulf during Operation Desert Storm and Iraq.

Having received High Mobility Artillery Rocket Systems (HIMARS) from the US, Kiev has doubled down, urging Washington to provide long-range missiles, something that the Biden administration has declined to do so far. The latest request from the Ukrainian leadership shared with American lawmakers and viewed by The Wall Street Journal contains dozens of types of weapons Kiev claims it will need “to press its offensive into 2023”. Among them are ATACMs boasting a range of about 190 miles (305 kilometers). Currently, the maximum range of US-provided missiles to Ukraine is around 49 miles (78.8 kilometers).

“I have read that the Biden administration has had an increasingly strained relationship with Ukrainian President Zelensky and Zelensky’s attempts to expand the war into Russia are likely one of the primary points of disagreement that the Biden administration has had with him,” says David T. Pyne, an EMP Task Force scholar and former US Department of Defense officer.

Russia’s special military operation was launched on February 24, 2022, after the Donetsk and Lugansk People’s Republics (DPR and LPR), recognized by Moscow as independent states, appealed for help in defending themselves against Ukrainian eight year-long attacks against the breakaway region and its civilians.

As the special operation continues, Kiev persists in shelling the territory of the Donbass republics targeting not only military and industrial facilities, but also residential areas and infrastructure. In addition to that, the Ukrainian military has repeatedly struck residential areas of Russia’s border regions. On September 16, two civilians sustained injuries and one died, according to the local authorities, after Ukrainian troops shelled the town of Valuyki in Russia’s Belgorod region.

It appears that the Biden administration “has subordinated US national security policy to the Zelensky regime,” which refuses to hold peace talks while “it is the US that should be setting clear and achievable objectives and calling for a peace conference based on those objectives in the realization that there is no chance whatsoever that Ukraine can defeat Russia in this war,” according to Pyne.

Meanwhile, US politicians and lawmakers have leveled accusations of “terrorism” against Russia and blamed it for targeting electrical grid in Kharkov and a dam on the Ingulets River amid Kiev’s counter-offensive.

“Any effort by the West to spin what Russia’s done into a war crime is factually incorrect,” stresses Ritter, stressing that Russia’s military strategy has never been aimed at “punishing” Ukrainian civilians. “This wasn’t inflicting horrific damage on Ukrainian infrastructure. Ukraine didn’t lose any power generation capability or anything of that nature.”

The first thing one needs to understand about Russia’s strikes is that the damage that was done was not permanent in nature, the military analyst says, adding that most of the targeted electric facilities were back up and running within 24 hours. Likewise, the way Russia attacked the dam, “it can be readily repaired and the situation returned to normal in a relatively short amount of time,” he adds. This means that “the Russian targeting was very precise” being “a surgical use of military force to shape the battlefield so that Russia could rebuild its defense,” according to the military analyst.

“[The attack] was designed to temporarily remove electrical power from a broad area so as to disrupt the movement of Ukrainian forces and the ability of Ukrainian command to carry out effective command and control of these forces,” Ritter says. “[B]y taking out the electric grid, Russia effectively froze the Ukrainian movement of forces in place, buying time for their troops to consolidate to defend.”

The same thing can be said about the dam, continues Ritter: “The strike against the dam was designed to raise water levels along a strategically important river to remove bridges that had been built across this river by Ukrainian forces with the assistance of NATO that were used to sustain a significant Ukrainian military buildup that was threatening Russian forces. By removing these bridges, the Russians denied the Ukrainians the ability to supply these troops. These troops are now isolated and being subjected to military action by Russia designed to reduce the threat.”

An Austrian soldier arrives with a tank type ‘Leopard’ prior the friendship shooting of several nations during the exercise ‘Strong Europe Tank Challenge 2017′ at the exercise area in Grafenwoehr, near Eschenbach, southern Germany, on May 12, 2017 – Sputnik International, 1920, 16.09.2022
Russia’s Special Operation in Ukraine
Thanks But No Tanks: Bundestag Lawmaker Reveals Why Berlin Isn’t Sending Heavy Armor to Ukraine
16 September, 11:22 GMT

Both US military experts agree that Washington’s stance with regard to Russia’s special military operation is nothing short of hypocritical given the Pentagon’s record of military invasions and brutal tactics of destroying civilian areas and critical infrastructure.
“US military doctrine is… to take down the enemy’s critical infrastructure at the onset of a conflict,” explains Pyne. “During the 1991 Iraq War and the unprovoked 1999 NATO bombing of Serbia, the US attacked the enemy power grid within the first few days of the war.”

Ritter was a participant in Operation Desert Storm that began on January 17, 1991. He says he is “very familiar” with the strategic air campaign that the United States waged against Iraq.

“In Iraq, we permanently disabled Iraqi electrical power plants – permanently disabled them – so that they could never again generate electricity during the course of the war,” says the former US Marine Corps intelligence officer. “That’s a departure from what Russia did. Russia temporarily disabled it. Against Iraq, we blew up every single bridge that went across the river. We blew up rail lines. We blew up roadways. We disrupted the lines of communication, the ability to travel back and forth. This is not what Russia’s done. The bridges that Russia took out were temporary pontoon-type structures that had been put in place by the Ukrainian military. When the United States takes out bridges, we permanently remove them.”

From day one of the special military operation Russia has made it clear that its objective is to minimize harm to civilians and civilian infrastructure, Ritter underscores, adding that “if the United States was involved in this war, the Ukrainians would never have been able to move a single battalion, let alone six brigades’ worth of troops into the battle zone.”

For his part, Pyne notes that many Western military analysts thought that Russia would employ far more assertive methods of war and would disable Ukraine’s critical infrastructure including its internet, electrical power, command and control and transportation system. Neither did Russia resort to unconventional technologies including cyber and Electromagnetic Pulse (EMP) weapons, he acknowledges.

“If the Biden administration has any issues with the level of death and destruction occurring in the war in Ukraine, it should take positive steps to mediate a compromise peace agreement to end the war rather than doing everything it can to prolong it unnecessarily,” Pyne says.
Ritter voices a similar stance: “If NATO didn’t want the electrical grid and the dam [hit], then NATO shouldn’t have built up an army that threatened the Russian positions. This is the reality of war.”

At the same time, Pyne believes that “Russia is justified in attacking Ukraine’s critical infrastructure given that its mostly reasonable peace offers have been rejected by Ukraine over the past six months.”

The EMP Task Force scholar refers to a series of Russo-Ukraine peace talks which led to preliminary agreements on March 29 in Istanbul and Moscow’s voluntary withdrawal of troops from Kiev. Nonetheless, the Zelensky government made a U-turn after that and backpedalled on peace negotiations.

“From the Russian perspective, it has been fighting a mostly defensive, preventive war in Ukraine to prevent Ukraine from becoming a member of NATO, which it views as an existential threat to the Russian Federation,” the former Pentagon officer notes. “As Dr. John Meersheimer has stated, the US would act the same way under similar circumstances for example if Texas declared independence from the US and became a de-facto member of the Shanghai Cooperation Organization.”

In December 2021, Russia proposed draft security agreements to the US and NATO. The documents looked to diffuse tensions sparked by the transatlantic alliance’s decades-long eastward expansion and Washington’s efforts to arm Ukraine and create new military installations on Russia’s doorstep. The drafts envisaged Ukraine’s non-admission to the military bloc, non-deployment of offensive weapon systems near Russia’s borders, and the return of NATO’s European capabilities and infrastructure to 1997 levels. However, the US, NATO and the EU rejected the agreements’ key provisions leaving Moscow no other alternative but to take preventive measures of demilitarizing and de-Nazifying Ukraine.

“The only vital US national security interest in Ukraine is to prevent the war from escalating to a full-scale shooting war between NATO and Russia,” insists Pyne. “Given that Ukrainian President Zelensky has repeatedly stated his foremost objective is to embroil NATO in a war with Russia, the US should have cut off all lethal military assistance to Ukraine back in April and essentially declared its benevolent neutrality in the conflict.”

The only hope Ukraine has of winning is with a fair and reasonable compromise peace agreement, Pyne emphasizes. As of yet, however, Kiev has shredded any calls to broker peace with the US State Department-funded Ukrainian Center to Counter Disinformation denouncing Pyne, the author of the 15-point Russia-Ukraine peace proposal, as “an information terrorist subject to being tried as a war criminal.”

“Under the pretext of Fighting ISIS”/By Ibrahim Mohammad﻿