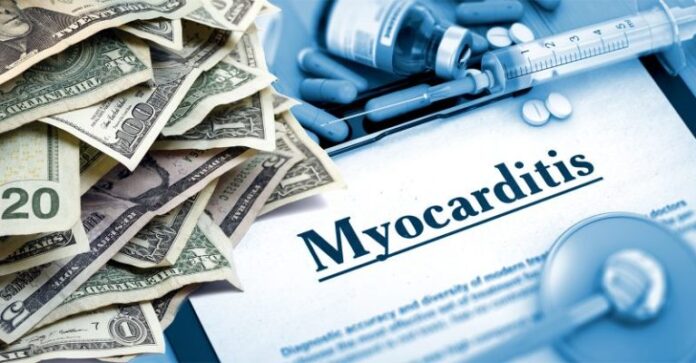 Medical debt is the predominant cause for about 25% of consumer bankruptcies, with medical debt often triggered by “sudden adverse events — such as vaccine-induced myocarditis.

For decades, families have been learning bitter lessons about the financial impact of vaccine injuries. In an estimated 18% to 26% of consumer bankruptcies or more, medical debt is the “predominant causal factor” — with medical debt often triggered by “sudden adverse events.”

Consider autism — by now indisputably linked to vaccines as well as other toxic exposures — which can saddle families with lifetime care costs of $1.4 to $2.4 million, setting up a contentious battleground between parents and entities like insurance companies and school systems that don’t want to “pick up that big tab.”

The government’s National Vaccine Injury Compensation Program (NVICP), too, has gone to great lengths to avoid compensating autism and other childhood vaccine injuries, helped along by the well-known dysfunctions of the Vaccine Adverse Event Reporting System (VAERS).

Although an HHS-commissioned study estimated, in 2010, that 1 in every 38 vaccine doses (2.6%) produced an adverse reaction, the conveniently broken surveillance system facilitates propagation of the fiction that adverse events are “rare,” “one in a million” or, according to Dr. Anthony Fauci, “almost nonmeasurable.”

The taxpayer-funded NVICP has paid out over $4.7 billion since 1988 and professes to be an “accessible and efficient forum for individuals found to be injured by certain vaccines.” But its adversarial — and sluggish — process and sky-high burden of proof result in two-thirds of claims being dismissed or remaining in limbo.

When it does pay out, NVICP more often compensates vaccine injuries in adults than children.

Recipients of Emergency Use Authorization (EUA) COVID injections ostensibly have recourse to the special Countermeasures Injury Compensation Program (CICP), but the CICP, from its inception, has proved to be even more of a hollow promise than the NVICP, with no funds set aside to cover eventual compensation, no allowance for attorneys’ fees and a one-year statute of limitations.

As attorneys wrote in January, “If you have suffered a serious injury from a Covid-19 vaccine, you are basically on your own.”

In short, the financial stakes for those who take liability-free COVID shots — with their unparalleled health risks — are high.

In early 2020, the CEO of a crowdfunding platform noted that over one-third of its fundraisers were for medical expenses. With more than 1 million COVID-vaccine-related adverse events reported to VAERS since December 2020, that state of affairs has picked up even more speed, as households rack up extraordinary debt and turn to crowdfunding for help.

One of those “environmental triggers,” researchers acknowledged, was vaccination.

With the advent of COVID shots, cardiac adverse events — myocarditis, pericarditis and myopericarditis — have skyrocketed to an entirely new level, especially in young males and especially after the second dose.

In young people under the age of 30, VAERS shows “a 15,600% increase in heart disease following COVID EUA vaccines compared to FDA-approved [U.S. Food and Drug Administration] vaccines for the previous 31 years.”

With heart problems being some of the most commonly reported, widely published and life-changing COVID-jab-related injuries, the FDA was forced into requiring warnings about the increased risks in manufacturer fact sheets.

As University of Pennsylvania researchers put it last year (parroting official silliness about such events being “rare”), “the temporal association of the receipt of the vaccine and absence of other plausible causes suggest the vaccine as the likely precipitant of these rare events.”

Heart conditions pack a financial wallop, predominating among the 20 most expensive conditions treated in American hospitals and accounting for almost half of aggregate hospital costs.

With the most expensive healthcare in the world, a third of U.S. healthcare spending goes to hospital care.

Analyzing several hundred confirmed myocarditis and pericarditis cases in young COVID vaccine recipients (< 29 years), a Centers for Disease Control and Prevention (CDC) scientist reported in June 2021 that 96% of the youth with heart injuries had been hospitalized.

Past studies of myocarditis and pericarditis hospitalization costs have found the following:

Both arrhythmias and complications from cardiac treatments are common causes of hospital readmission.

Not ‘mild’ and not short-term

Chest pain, malaise and palpitations are common signs of pericarditis. It, too, can lead to heart failure and other longer-term complications.

Children tend to have a more fulminant — sudden and severe — myocarditis presentation than adults, with an estimated 7% to 15% mortality rate. Children hospitalized with myocarditis are more likely to die than children admitted with other diagnoses.

One of the Mayo authors added in 2018, “the greatest burden of myocarditis may not be apparent for 6 to 12 years after diagnosis when children die or need to undergo cardiac transplantation.”

Strangely, Mayo nevertheless continues to propagate the myth of “mild” myocarditis, a dishonest characterization that physicians in the COVID era have strenuously protested.

“Contrary to what a number of people have said, there is no such thing as ‘mild myocarditis.’ It’s the destruction of the myocytes, the heart cells that contract. When those cells die, they are not replaced in your body and are instead replaced by scar-tissue, which is from fibroblasts — skin cells which don’t have contractile activity …Every time you get an inflammatory response, you lose more of that contractility and have a greater chance of heart attack and other problems later in life.”

A New Zealand writer pointedly observed that “mild” clinical manifestations in the present are meaningless for interpreting longer-term risks.

Using magnetic resonance imaging (MRI) scans with gadolinium contrast — capable of showing “damaged heart areas undetectable by any other means” — studies of children and adolescents who developed myocarditis following COVID vaccination revealed, in the vast majority, a “potentially poor prognosis despite the heart seeming to have returned to normal.”

The study disclosed the alarming finding that abnormalities in cardiac structure and function acquired in young adulthood are a risk factor for cognitive decline in midlife.

For severe cases, interventions can be costly, aggressive and often futile.

For complications of severe myocarditis, the last resort is a heart transplant. Ironically, individuals who need a transplant but refuse to get a COVID shot are being taken off transplant waiting lists.

These gizmos come with a high price tag, with total hospitalization costs for pediatric patients receiving such support estimated around $755K (VAD) and $809K (ECMO), versus $457K for patients not getting mechanical support.

Good for business, bad for families

Cardiac injuries triggered by dangerous COVID injections appear to be good for business. As the Mayo Clinic frankly admits, some myocarditis patients will require lifelong medication — creating customers for life.

Moreover, the corticosteroids — “or other medications to suppress [the] immune system” —  and anti-clotting or blood-pressure drugs prescribed for supposedly “mild” cases of myocarditis come with their own set of side effects, setting the stage for further profit-generating medical and pharmaceutical interventions down the road.

A July 2021 BusinessWire report forecast a booming market for cardiac-assist devices such as VAD through 2027, noting “increasing incidence of heart failure is driving growth.”

BusinessWire cited the vast pipeline of such products as a market driver and “opportunity.”

In addition, Big Pharma is champing at the bit to roll out expensive new pericarditis therapies — which researchers eagerly (coincidentally?) announced in late summer and fall of 2021.

Meanwhile, COVID shots are leaving many young people either dead or facing a broken heart and uncertain future.

Even with definitive autopsy confirmation of a direct vaccine-myocarditis link staring them in the face, the engineers of “this ungodly and criminal medical experiment on humankind” — a key fixture of the push for a global control grid — are content to uphold the ruinous status quo.

Where does that leave families?

Holding the bag not just emotionally, but financially, blindsided by financial impacts they surely never anticipated.