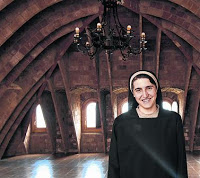 This article first published by Global Research in November 2009 recalls the circumstances of the H1N1 swine flu pandemic, which turned out to be a WHO fraud on behalf of Big Pharma.

Sister Teresa Forcades i Vila has taken off her theologian’s hat and gone back to her doctor in public health role to address the influenza A (H1N1) pandemic in a new video  that calls for a calm approach to the disease and emphasizes the right of citizens to refuse to be vaccinated against it.

Sister  Teresa also has a new blog space on catalunyareligió.cat in which she is sharing her writings on the flu and other issues

BELL TOLLING for the Swine Flu (ENGLISH subtitled) from ALISH on Vimeo.

What’s a nun doing talking on the Internet about the dangers of the Influenza A vaccine?

I devote part of the working hours to medical research. I’m a doctor of medicine and in 2006 I published the study Crimes and Abuses of the Pharmaceutical Industry.

When did you decide you had to speak out on influenza A?

In May this year I was asked to give a speech on the papillomavirus vaccine and I was very struck by the lack of scientific basis for the official recommendations. After a few days I spoke on TV-3 about this vaccine and since then I have been receiving requests to comment on the influenza A vaccine.

READ MORE: After the Lockdown: A Global Coronavirus Vaccination Program…

Doesn’t the World Health Organization deserve to be trusted?

I don’t understand the motives that have led WHO to act in the absurd way it is acting.

What are the consequences of this change?

Under the new definition of “pandemic”, the annual [seasonal] flu more than meets the requirements to be one. Are we going to declare a world health alert every fall? Besides absurdity from the scientific standpoint, this has serious financial and policy consequences.

You don’t trust the vaccine. Why?

Unlike the annual seasonal flu vaccine, the influenza vaccine contains such powerful adjuvant substances that they can get the normal immune response to multiply by a factor of 10. In addition, two doses are recommended, to be received after the injection for seasonal influenza, which also contains adjuvants, although less potent. Never before have these substances been injected three times in a row in the general population, starting with children, the chronically ill and pregnant women.

What effects can result?

The artificial stimulation of the immune system can cause autoimmune diseases.

The same prospect of two of the influenza vaccines that have already been approved in Europe (Pandemrix and Focetra) indicates that it is expected that for every million people vaccinated, 99 will experience an autoimmune disease known as Guillain-Barré progressive paralysis.

If that happens, the drug companies would receive demands…

But in the U.S. a decree has already been approved exempting politicians and drug companies from liability.

Are you suggesting that the drug companies have acted irresponsibly?

What they have done is work for their interests.

Can someone be obliged to get vaccinated?

In 2007, WHO adopted a regulation establishing an exception. In all cases except one, the WHO makes recommendations, and only in one case may it give orders that override the sovereignty of member countries.

In the case of a pandemic.

Exactly. In 2007, WHO adopted a regulation that in case of a pandemic, WHO can legally bind member countries to vaccinate all or part of their population. The governments of these countries would be obliged then to impose fines or other penalties for individuals who refuse to be vaccinated.

Do you believe in world conspiracies?

I think there are interests at stake are not the good of the population. How can we justify the money invested in the purchase of vaccines if influenza A is milder than the annual seasonal flu? Spending so much money on vaccines and other preventive measures without sufficient scientific basis is an outrage and we should ask for accountability.

What do your fellow nuns say about the video and your statements?

An almost 90 year old sister raised the objection that the subject of influenza A is very serious and that I couldn’t speak out against the vaccine without having well-founded arguments.

After reading my report, she approached me after vespers and simply said to me: “Understood.”

Do you pray a lot?

As much as I can.

Censorship of #Convoy to Ottawa Group

“No one has died from the coronavirus” Important revelations shared by...

“Orders from Above” and “Emergency Protocols” Create a “Perfect Storm” at...