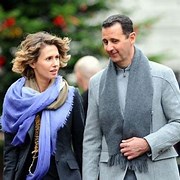 I would like to share this statement from a Syrian inside Syria. A Syrian who has remained loyal to his country, stood by his President, Army and allies throughout ten years of collective punishment for the huge majority of Syrians who hold similar views to this Syrian. I myself hear time and time again – people will criticise the government but “our President is the red line”

“After listening to Netherlands and Canadian ministers pledge to hold President Assad accountable and to prosecute him for “his terrible crimes” committed against their terrorist project and filthy proxies who invaded and destroyed our country, I would like to say..

These dumb tools know that they are not worthy to clean the soles of President Assad’s shoes. They know that all the media, psychological warfare and sadistic economic pressure imposed upon the Syrian people will not weaken the position they took ten years ago. They know that they will not intimidate the Syrian people into being silent when the time comes to bring their tormentors to justice.

Save your time and your efforts, save your people’s taxes and try to understand:

REVEALED | How the US, Qatar and Saudi Arabia planned to destroy Syria and assassinate Assad/ By Kevork Almassian

2021 Syrian Presidential Elections: who is running for President?/ Analysis by...