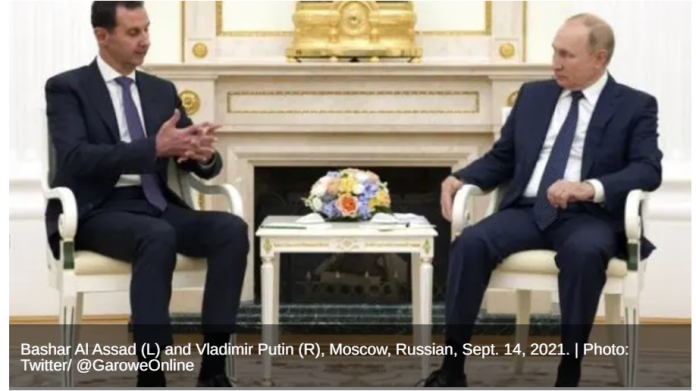 He also denounced that the U.S. sanctions against the Syrian people “can be classified as anti-human” and ” not legitimate.”

During a meeting with President Vladimir Putin held in Moscow, Syrian President Bashar al Assad accused the Western powers of preventing a peaceful solution to the conflict in his country and obstructing peace negotiations between his administration and the opposition.

“The political processes that we carried out have been stalled for about three years,” Al Assad said, and denounced that the U.S. has imposed sanctions and coercive measures against the Syrian people that “can be classified as anti-human” and ” not legitimate.”

During the meeting, Putin highlighted that the unauthorized presence of foreign armed forces in parts of Syria is the main problem facing this Middle Eastern country. Their presence not approved by the United Nations or the Syrian leadership contradicts international law, and has impeded efforts to consolidate the country and slowed down post-war restoration.

Putin hoped Assad’s actions to establish a dialogue with political opponents would continue as only a consolidation of all forces in Syria will allow the country to move forward move forward and begin a progressive development aimed at the future.”

The Russian president stressed that the Al Assad administration controls 90 percent of the Syrian territory and has managed to deal a heavy blow to the terrorists who unfortunately continue to terrorize the civilian population.

Putin also spoke highly of the development of trade and economic ties between the two countries, whose trade volume increased 3.5 times in the first half of this year.

During the meeting, Assad criticized “certain states” for obstructing the political processes in Syria in every possible way and said foreign sanctions were anti-human and illegitimate. He thanked Russia for providing humanitarian aid, including COVID-19 vaccines, and defending norms of international law.