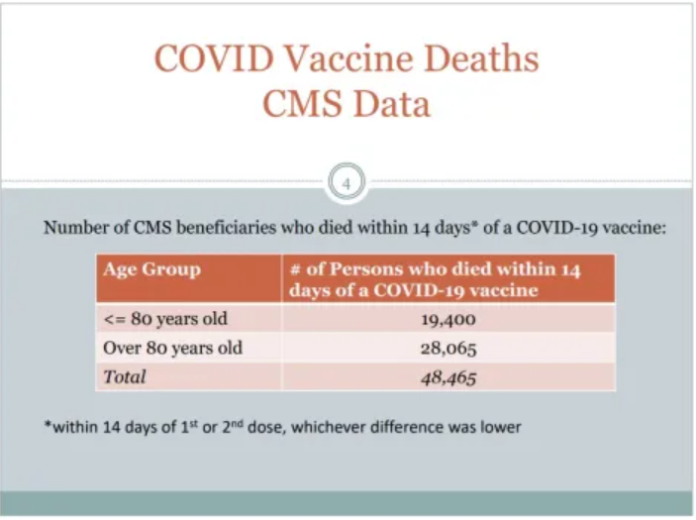 Back in July of this year we reported that Ohio-based Attorney Thomas Renz was filing a federal lawsuit in Alabama based on a “sworn declaration, under threat of perjury,” from an alleged whistleblower who claims to have inside knowledge of a cover-up of reported deaths filed with the Vaccine Adverse Event Reporting System (VAERS). See:

Attorney Files Lawsuit Against CDC Based on “Sworn Declaration” from Whistleblower Claiming 45,000 Deaths are Reported to VAERS – All Within 3 Days of COVID-19 Shots

Attorney Renz spoke at an event in Colorado this past weekend, and stated that more whistleblowers have now come forward, and that the death rate with those taking the COVID-19 vaccines is much higher than they originally thought.

Presenting data that he claims comes directly from the CMS (Centers for Medicare & Medicaid Services) database, there have been 48,465 deaths among CMS beneficiaries within 14 days of a 1st or 2nd dose of a COVID-19 vaccine.

There are about 59.4 million Americans covered by Medicare, representing 18.1% of the population, so these are staggering numbers!

Renz also presented very damning data on the drug Remdesivir, the new COVID-19 drug that was rushed to market while existing, safe and effective older drugs like Ivermectin are prohibited in hospital settings.

According to CMS data, almost 26% of people put on Remdesivir die. But it is a huge money maker for the government and Big Pharma.

By contrast, only 3.5% of people put on Ivermectin died, according to CMS data. But there are no longer any patents on Ivermectin, so it is not a money maker for the government and Big Pharma.

As attorney Renz states: “You’re being defrauded by your government!”

He also goes on to show what are allegedly documents from Pfizer that seem to suggest they knew that “shedding” occurred with their COVID-19 mRNA shots.

Here is the presentation. I have excerpted the key data he presented. This is from our Bitchute channel, and it will also be on our Rumble channel.

READ MORE: Video: “It is not a Case of Pandemic, This is a Case of Murder”: Dr. David E. Martin

Video: Pfizer’s “Secret” Report on the Covid Vaccine. Beyond Manslaughter. The Evidence is Overwhelming. The Vaccine Should Be Immediately Withdrawn Worldwide – Global ResearchGlobal Research – Centre for Research on Globalization

WHO recommends against the use of remdesivir in COVID-19 patients

CDC Reports 5,300 Errors in Vaccine Doses Given to Kids, as Latest VAERS Data Show 155 Reports of Deaths in Children 6 Months to...

“If Russia Protects Us, We Are Ready to Vote For It”...

Letter to US Department of Defense Re. Defense Medical Epidemiology Database...