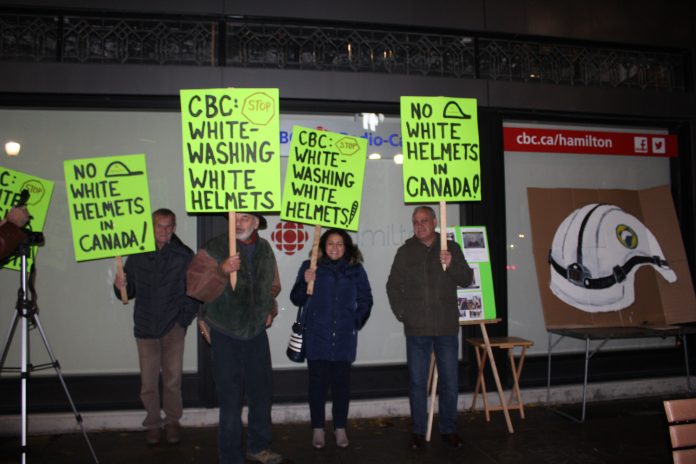 White Helmets terrorist factions, supported directly by the US and its allies including Canada, are currently operating missile detection systems in Idlib, Syria.

The Sentry system[1] – funded in part by the Canadian government – will warn against Syrian and Russian airstrikes, but not against U.S airstrikes.

“Idlib province is the largest al-Qaeda safe-haven since 9/11, tied to directly to Ayman al Zawahiri, this is a huge problem.” [2]

So clearly, the White Helmets- operated Sentry system will be protecting the West’s al Qaeda proxies.

The leader of HTS (Al-Qaeda)  Abu Jaber calls the White Helmets the hidden soldiers of the revolution. March 2017

Second, a message of thanks and gratitude to the hidden soldiers of our revolution. On top of the list are the parents of the martyrs and the men of the White Helmets.

HTS (Al-Qaeda affiliate) in the person of both Muhaysni and Abu Jaber honor  the White Helmets whose representative in turn calls HTS “my brothers”  May 2017.

With the Syrian revolution going into its 7th year Hay’at Tahreer Al-Sham (Nusra) finds that it is its duty to honor the hidden soldiers who spent their days and nights serving their people so it organized an honoring ceremony to give some gratitude to those with the white hands.

I would like to thank my brothers in Hay’at Tahreer Al-Sham (Nusra) for this honoring ceremony and all those who participated in organizing this event.

When the West annihilated Raqqa, Syria, and countless civilians, in a four month siege, from June 6 – October 17, 2017, it offered inadequate evacuation procedures for civilians to leave, but it did provide safe passage for its ISIS proxies to redeploy elsewhere, only to re-occupy the destroyed and depopulated[3] area with SDF proxies. The siege was actually an operation that involved destruction, depopulation, and reoccupation disguised as “liberation”[4].

In stark contrast to the West’s criminality, when Syria and its allies – all operating in accordance with international law —- liberated Aleppo, Syria, from November-December 2016, they offered reconciliation and amnesties to occupying terrorists[5], with a view to saving lives where possible, while at the same time liberating the area from all terrorist factions.

Whereas Aleppo has been reborn, Raqqa remains a wasteland. The White Helmets are serving Empire’s agenda of mass death and destruction.

READ MORE: Civilization Versus Barbarism. Why Does the West Support Al Qaeda?