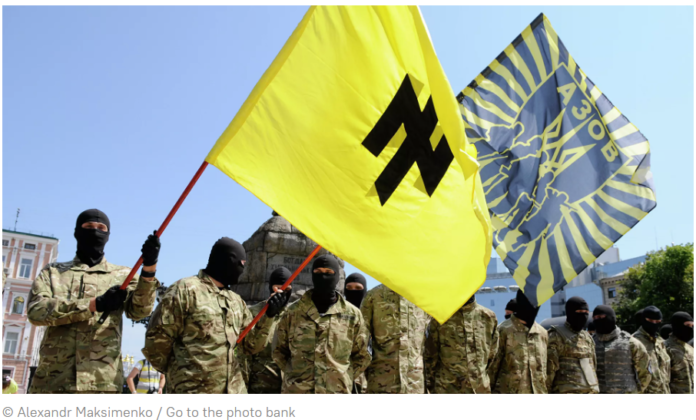 French President Emmanuel Macron claimed in his Wednesday address to the nation that Russia’s special operation to demilitarise and “de-Nazify” Ukraine is “not a fight against Nazism”, thus joining the chorus of political leaders and media outlets in the West who downplay or altogether deny the problem of Ukrainian ultra-nationalism.

Ukraine’s ultra-nationalist and neo-Nazi battalions made headlines after the 2014 February coup d’etat in the country only to be largely overlooked and downplayed in the ensuing years by the mainstream media.

“Far-right, anti-Semitic, anti-Russian, and openly fascist groups have existed and do exist as a blight on modern Ukraine”, CNN wrote in March 2014. It quoted a 2012 European Parliament resolution raising 18 points of concern over policies embedded in the laws of the nation’s parliament, and denounced “the rising nationalistic sentiment in Ukraine”.CNN admitted that Ukraine’s ultra-nationalist parties and groups, including Svoboda and the Right Sector ultra-nationalists, played a significant role in the 2014 regime change in Kiev and later assumed positions in the National Security and Defence Council, the office of the Prosecutor General, and the ministries of ecology and agriculture of the interim government.Shortly after the coup, Ukraine saw the formation of volunteer nationalist battalions that carried out attacks against the breakaway Donbass republics and terrorised Eastern Ukrainian civilians. One of them, Azov, was led by Andriy Biletsky, former leader of the Kharkov branch of “the Stepan Bandera All-Ukrainian Organisation ‘Tryzub'” and co-founder of the ultra-nationalist movement, the Social-National Assembly.

Biletsky was quoted as saying in 2010 that Ukraine’s mission was to “lead the white races of the world in a final crusade…against Semite-led Untermenschen [subhumans]”. He was a member of the post-coup Ukrainian Parliament between 2014 and 2019. Azov formally joined the Ukrainian National Guard in 2014.

The Azov regiment, that still proudly wears the neo-Nazi Wolfsangel insignia, is notorious for attacking and displacing residents in eastern Ukraine, looting civilian property, as well as raping and torturing detainees in Donbass, according to a 2016 UN report by the High Commissioner for Human Rights (OCHA).

The ministry’s 2020 list also included the project “Unconquered” – named in honour of Yaroslav Robert Melnik, a regional leader of the Organisation of Ukrainian Nationalists (OUN) of the Carpathian region and a “major political educator” of the Ukrainian Insurgent Army (UPA)*. Both OUN and UPA are infamous for collaborating with Nazi Germany and conducting the ethnic cleansing of Jews, Russians, Roma, and Poles in the Nazi-occupied territories of Ukraine during WWII.

After the western-backed Orange Revolution, President Viktor Yushchenko altered the Ukrainian school curriculum to glorify both OUN and UPA and granted the titles of Hero of Ukraine to OUN-UPA leaders Roman Shukhevych and Stepan Bandera in 2007 and 2010, respectively.

While in May 2011, the Supreme Administrative Court of Ukraine reversed Yushchenko’s orders, President Petro Poroshenko gave OUN and UPA the status of “fighters for the independence” of Ukraine in 2015. As of today, several hundred monuments and statues have been erected and streets named after former Nazi collaborators in Ukraine.

On 16 December 2021, the UN General Assembly discussed a resolution that called to combat the glorification of Nazism, neo-Nazism, and other practices that fuel racism and xenophobia. The only two countries that voted against it were the US and Ukraine.

Unveiling a monument to Stepan Bandera, the leader of the Organization of Ukrainian Nationalists, in Lviv.© Sputnik / Miroslav Luzetsky / Go to the photo bank

“Founded in 1929, the Organisation of Ukrainian Nationalists became the dominant political movement of the Ukrainian far right. It was formed out of a number of radical nationalist and fascist groups and was, initially, led by war veterans, frustrated by their failure to establish a Ukrainian state in 1917–1920”, wrote Per Anders Rudling, a Swedish-American historian and associate professor at the Department of History at Lund University in a 2011 study “The OUN, the UPA, and the Holocaust: A Study in the Manufacturing of Historical Myths”.

According to Rudling, there is no doubt that OUN was a “fascist” organisation from its inception. The idea of racial purity was a leitmotif of OUN’s ideology. The Ukrainian nationalist press regularly carried anti-Semitic articles since the 1930s. After the Nazi occupation of Ukraine in 1941, OUN teamed up with them and went on an ethnic cleansing spree in the occupied territories.

“The Nachtigall Battalion, consisting almost exclusively of OUN(b) activists serving in German uniforms under Shukhevych’s command, carried out mass shootings of Jews near Vinnytsia in July 1941”, wrote Rudling. “At least 58 pogroms are documented in western Ukrainian cities, the estimated number of victims of which range between 13,000 and 35,000”.On 29-30 September 1941, Nazi forces and their Ukrainian collaborators executed nearly 34,000 Jews in Babi Yar, a ravine in the Ukrainian capital Kiev.

From 1943 and until the arrival of the Soviet Army, OUN – and its military wing, UPA – had carried out massive ethnic cleansings of Poles in Volhynia and Galicia which claimed the lives of at least 88,700 people, including children, women, and the elderly.

“The murderers used primarily farm tools – scythes, knives, and pitchforks. Orthodox priests blessed such weapons in their churches. The bodies were often badly mutilated…in order to dehumanise the victim and strike terror”, noted the historian.

According to Rudling, the most vocal advocate of this bloodbath was Mykola Lebed, then-acting leader of the OUN. Remarkably, it was Lebed who established contacts with the American intelligence services in 1945 from his exile in Rome, the historian wrote. Despite describing him as “a well-known sadist and collaborator of the Germans”, the CIA and the US State Department sponsored Lebed’s 1949 immigration into the US and shielded him from prosecution, according to Rudling.

After the defeat of Nazi Germany in 1945, members of OUN and their paramilitary UPA units joined foreign subversive groups, propaganda outlets, and intelligence agencies to fight against the USSR during the Cold War.

In 1956, the CIA incorporated a set of networks under Lebed’s leadership and created the non-profit Prolog (Prologue) Research and Publishing Association, whose goal was to publish anti-communist propaganda, including radio broadcasts, newspapers, and books. During the Cold War, Ukrainian diasporas and OUN-UPA veterans were busy whitewashing the organisation’s crimes, the author pointed out. They created historic forgeries and myths about the OUN and UPA being pluralistic and inclusive organisations which rescued Jews during the Holocaust and fought shoulder to shoulder against Hitler and Stalin. After the collapse of the USSR, these narratives started filling the gap left by Soviet ideology in a new Ukrainian state.

“Unlike many other former Soviet republics, the Ukrainian government did not need to develop new national myths from scratch, but imported ready concepts developed in the Ukrainian diaspora”, wrote Rudling.

The problem, however, is that despite the manipulations of history, the fascist roots of Ukrainian radical nationalism never went away, according to the historian. The ideological heirs of the OUN-UPA got their first chance to receive government recognition under Viktor Yushchenko and then, after the four-year presidency of Viktor Yanukovich they returned to the stage to hijack even more power and penetrate the fabric of Ukrainian society.

*The Ukrainian Insurgent Army (UPA*) is an extremist organisation banned in Russia since 2014.