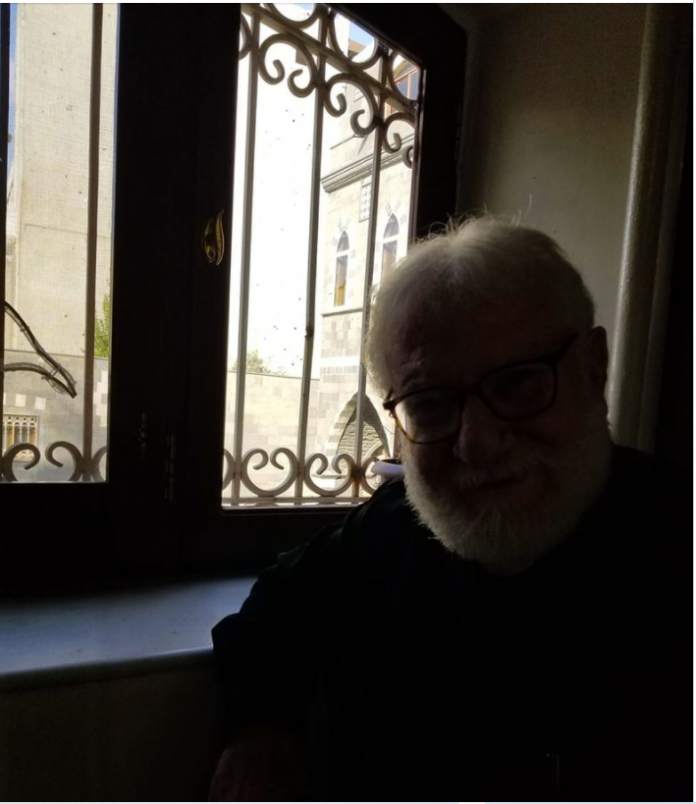 Homs, Syria “Why sanctions? Why hurt the poor people?”

Father Michel’s eyes and countenance shared his thoughts on my question about US sanctions before he spoke those words as we sat by the window of the church – his spot for coffee and contemplation. I’ve been following “Baba Michel” online since 2014 and been wanting to meet this gentle and seemingly never-tiring champion for the residents of Hamidiya neighborhood in Old Homs, and the city of Homs itself. I had gone to his church early in the morning, hoping to get some time with him before he started his prayers. He invited me for coffee by his window after I introduced myself and we talked for a while. I knew he isn’t as fluent in English as he is in French but figured we could understand each other somehow – and his simple words in my language made his message even more powerful for me. But much of the time we were just sitting, quiet…Because of the enormity of sadness and suffering that had happened here.

Because of the violence by “rebel” terrorists – who executed Father Frans nearby – most people had left until the area was cleared of America’s headchopping “freedom fighters”.

Because since 2014 when the area was liberated from those “rebel” terrorists the work has been non-stop to restore the buildings and lives of those who’ve returned.

Because the economy is so devastated most of the residents’ grown children have left to find work outside the country.

And because the sanctions, the cruel sanctions imposed by the US against the people of Syria to punish them for not allowing their country to fall into the hands of the headchopping “freedom fighters”, make the suffering of Syrians appear to be without end.

Syrians have been made into pariahs, portrayed as enemies or victims, but never are they shown as they truly are: normal. Normal people in an extraordinarily difficult situation. “Why sanctions? Why hurt the poor people?”

Then I asked him what the ending of sanctions would mean for Syrians. “Night to day … life,” was his answer.

I knew the photo of him would be dark and should have used a flash, but maybe the contrast is more illustrative