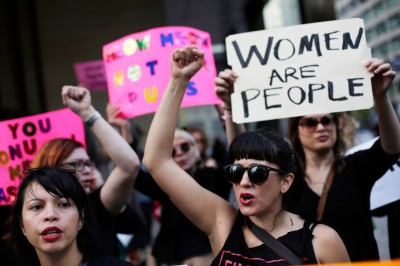 Did the Women’s March, billed as the biggest protest in U.S history, appear prominently on corporate news? If it did, then the death industry Establishment approves of it. MSM promotes war.

Did the Women’s March oppose Trump? If yes, then it is misdirected. Hillary Clinton is among the most powerfully misogynist politicians in Washington. She supports Wahhabism, Sharia law, death and destruction in her criminal foreign policy words and deeds. When Muammar Gaddafi was murdered, and Libya destroyed by NATO forces supporting al Qaeda troops, she rejoiced, “We came, we saw, he died”.

Clinton and her neo-con cabal support all the terrorists in Syria and beyond. The terrorists in Syria seek Sharia Law and sectarianism, and ruin, and pillage, and rape, and plunder of a democratically-elected secular, pluralist country. Linda Sasour, a march organizer, even feigned support for Sharia law on a tweet:

This misrepresentation of extraordinarily misogynist Sharia law appears to be a nuanced gesture of support for NATO’s terrorists in Syria, who impose Sharia law on hapless Syrians in occupied areas.Challenging the “Establishment”. The West Supports Terrorism

Marwa Osman, a political analyst and lecturer at Lebanese International University (LIU) responded on Facebook : “Someone strap her to one of those “aid” packages and throw her over Idlib. She will love sharia law there.”  (Idlib is a hotbed for head-chopping Western-proxy terrorists in Syria.)  And Australian artist Diane Mantzaris questioned:

Where were #WomensMarch protesters when Obama and Hilary’s trained funded and armed terrorists brutalised Syrian and Iraqi women and sold them into sex slavery? When pregnant women were eviscerated, their stomachs cut open with swords and their unborn babies ripped out and hung from trees?

The Obama administrations dirty war on Syria IS a war on Women.

Syria and her allies are still fighting cleaning up after your inability to look at the bigger picture to see past their cruel war, their cruel sanctions, their genocidal brutality inflicted on women and their families, you and your small minded life in a bubble ignorance, a compliant product of the administration you support. TAKE A WALK!

Clinton and the Democrats supported and orchestrated illegal foreign government- change operations as policy. In Honduras, Clinton et al. destroyed the democratic government and replaced it with a suite of narco dictators and their death squads. One of their most recent hits was indigenous leader Berta Caceres.

So the feminist opposition was controlled and approved by the media and the Establishment. The CIA, in concert with the oligarch –drenched Establishment was also quite likely trying to foment a “color revolution” -type operation. The predominant color was pink (a Pink Revolution?).  Reportedly, pink hats with ears were the fashion statement of the day – pussy hats?  All of which recalls the Pussy Riot caper,  which was likely a CIA operation to demonize Vladimir Putin. It also ties in with the girls from FEMEN, at least one of whom was at the Odessa massacre in the Ukraine, an illegal neo-Nazi-infested coup that is destroying Ukraine at this moment, thanks in large part to neo-con Victoria “F *** the EU” Nuland.

The march failed so far in the sense that Trump is President, but it succeeded in the sense that a pacified population could let off steam and publicly disapprove of Trump. I don’t follow MSM so I don’t know all the stories invented about Trump apart from golden showers or whatever the allegation was. But Trump says he wants peace with Russia, and he talks about dissolving the NATO terror organization etc., which is preferable to war criminal Hillary’s threats against Syria and Iran and the world.

Meanwhile, amidst the spectacles, the distractions, and the controlled-opposition, the slaughters, and beheadings, and genocide continue apace overseas. Voices from what remains of the “progressive movement” are barely audible, and the “Left” has been almost completely coopted.

The Establishment and the oligarch class couldn’t be happier.The original source of this article is Global ResearchCopyright © Mark Taliano, Global Research, 2017

Video: Ready for Nuclear Holocaust with Russia Over Ukraine?/ By Rep Tulsi Gabbard and Tucker Carlson

Over 1 Million Deaths and Injuries Following COVID “Vaccines” Reported in...

Stop The Spread Of Tyranny/Interview with John at Hamilton Rally, Nov...