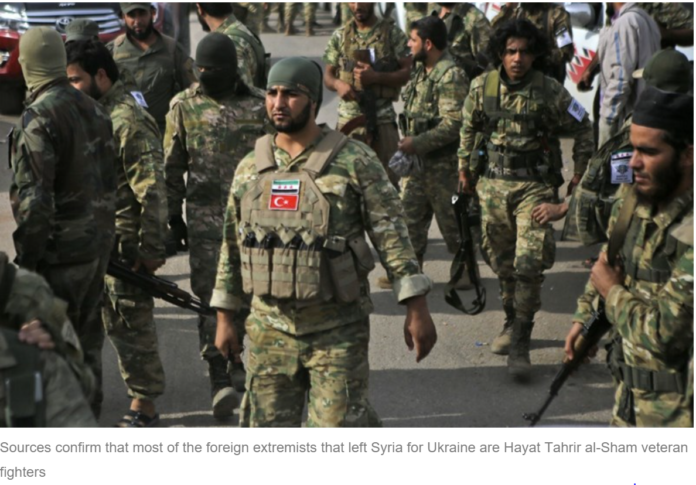 Almost 450 extremists from various nationalities arrive to Idlib to fight against Russian troops, after leaving Syria and passing through Turkey.

Close to 450 extremist Arab and foreign nationals have arrived in Ukraine from Idlib to fight against Russia’s forces, less than only three days after they left Syria, passing through Turkey.

Relatives of extremists that have arrived in Ukraine told Sputnik that senior fighters from terrorist group Hayat Tahrir al-Sham (the rebranded version of Jabhat Al-Nusra, i.e Al-Qaeda) have held a number of meetings with senior leaders in the Turkistan Islamic Party group and Ansar Al-Tawhid and Hurras al-Din groups, and agreed on allowing a number of all their fighters to enter Ukraine through Turkish soil.

The sources added that most of these foreign fighters are veterans of the Syrian war, had been causing issues in Idlib, and were given this opportunity to fight against Russia as a compromise by which they would receive a new start and with an acceptable income.

Hayat Tahrir Al-Sham also gave these fighters assurances that their families would be allowed to join them later.

Around 300 of these fighters are Syrian nationals that are originally from the Idlib and Aleppo countrysides, while the 150 others are Belgian, French, Chinese, Moroccan, Tunisian, Chechen and British nationals.

As for the financial compensation, the sources said the fighters that hail from Syria will receive around $1200-$1500, but had no knowledge what the foreign nationals were going to be paid.

Ukraine’s President, Volodymyr Zelensky, has previously stated that 16,000 foreign mercenaries will fight for the country.

Russia’s President Vladimir Putin had warned Germany’s Chancellor Olaf Scholz during a meeting last Friday of the growing number of foreign mercenaries operating in Ukraine, including those coming from Albania and Croatia and namely militants and Jihadists coming from Kosovo in order to put their experience from military operations in Syria to use.