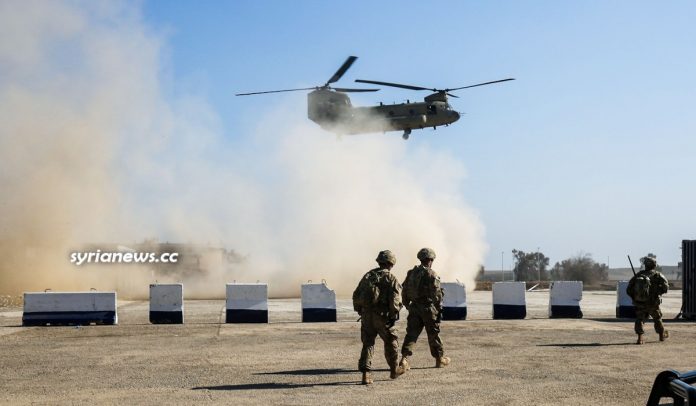 Biden forces illegally deployed in Syria moved dozens of terrorists from ‘prisons’ run by the Kurdish SDF separatist terrorists to its military base in Hasakah, in the northeast of Syria.

Informed sources reported that the total of 40 ISIS terrorists held in the Vocational High School and the Self-Defense quarter run by the Kurdish terrorist group were moved to the terrorist US military base in the Ash Shaddadi city in the southern Hasakah countryside.

The sources added that the US created ISIS terrorists fake rehabilitated by the US created SDF terrorists include the head of an ISIS sniffing group (low-level spying) and an ‘expert’ in making suicide vests and other explosive devices.

This latest addition will augment the dozens of previously fake rehabilitated ISIS terrorists moved from ‘prisons’ run by the Kurdish SDF terrorists to military bases run by the criminal Biden forces in northern Syria, some to the At Tanf base in southeastern Syria before being released to the wild.

Each time a herd of these ISIS terrorists is moved across their rehabilitation centers by the terrorist SDF and American military illegals, the number of terrorist attacks against the civilians and Syrian military buses increases especially those moving between Deir Ezzor, Raqqa, Homs, and Hama central provinces. The 4 x 4 Toyota SUVs shipped to Syria in large numbers by the US Army, used by the terrorists are suitable for the rough Syrian desert terrain.

Worth noting that ISIS terrorists who were operating in the southwest of Syria near the occupied Syrian Golan were pampered by the Israelis no thanks to the US taxpayers’ generosity.

To help us continue please visit the Donate page to donate or learn how you can help us with no cost to you.
Follow us on Telegram: http://t.me/syupdates link will open the Telegram app.

Killed in Turkey: No investigation two years after suspicious death of...

NATO backed mass mobilisation of foreign extremists, as in Syria, but...