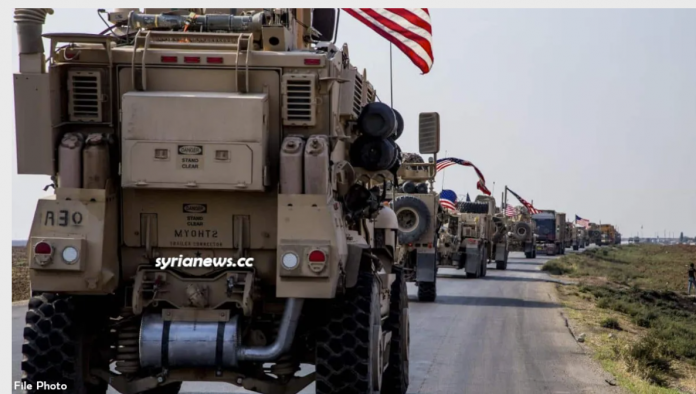 Biden forces illegally deployed in Syria continue their theft of Syrian resources with the latest convoy of 83 vehicles including dozens of tankers loaded with stolen Syrian oil smuggled out of Syria into neighboring Iraq.

Local sources reported the latest theft of the Syrian oil and other resources yesterday saying that the convoy of 83 vehicles, most of which were oil tankers carrying stolen Syrian oil, were seen heading from the Yarubiya area in Hasakah eastern countryside toward the borders with Iraq.

The convoy was coming from the Kharab Al Jir (Jeer) military airport used by the Biden oil thieves, sorry the Army of the United States of America, the sources confirmed to the reporter of the Syrian news agency Sana in the region.

The Biden’s White House junta, the colorful, most inclusive, and most diverse junta to rule the USA continue the policies of his predecessor the orange most isolated, black and white, no, only white and too much white ‘White’ House junta in stealing Syria’s resources, continuing the US forces presence in Syria without any approval from the Syrian state or the United Nations Security Council in a blatant breach to the US’s own commitments as a permanent member state of that good for nothing council.

Controlling parts of Syria’s northern provinces of Hasakah, Deir Ezzor, Raqqa, and Aleppo, in addition to the illegal military base in the depth of the Syrian southeastern desert at Al Tanf borders crossing with Iraq and Jordan is hindering the Syrian armed forces efforts in the war against terrorist groups, mainly ISIS and Al Qaeda, and is supporting other terrorist groups like the Kurdish separatist SDF armed militia.

The US oil thieves also deprive the Syrian people of access to their own oil causing massive shortages in oil to fuel their cars, heat their homes, and bake their bread which also its wheat is stolen regularly by Biden forces, their Kurdish SDF proxies, the Turkish army and its own proxies of Al Qaeda-affiliated terrorist groups, and deprive the Syrian people of their own water, and prevent millions of internally and externally displaced Syrians from returning to their homes.

A special note to the families of the US soldiers deployed in Syria: When they present you with the so-called ‘Purple Heart’ medal along with the flag they wrapped the body of your fallen fathers, sons, or even mothers killed in action in Syria, or return them crippled, keep in mind they were killed as criminals stealing the food and oil of other people on the other side of the planet, they were no heroes by any standards, they were the tools for some greedy politicians and their handlers sucking your blood in your own country and sucking the blood dry of other people around the world because you voted for them to power and you send your children, fathers, and mothers to kill and get killed so they become richer while you also foot the bills from your hard-earned tax money.