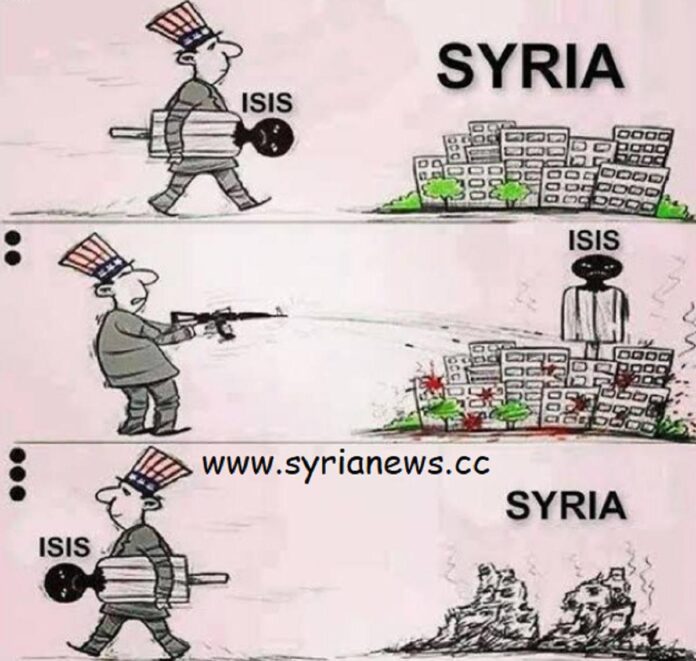 It took approximately seven hours of chaotic reporting before this news story was made coherent — albeit sounding and looking a bit like geopolitical monkey dung flinging.

The implied cynicism in the author’s above remark stems from the strange, imposed sense of déjà vu, combined with the curious rhyming scene of alleged self-detonation / family annihilation a la alleged Baghdadi blow up.

Abu Ibrahim al-Hashimi al-Qurayshi was killed on 2 or 3 February 2022, by Biden forces illegally in Syria, or by self-detonation, despite having possibly been killed in Syria, in May 2020.

On 18 March 2020, just two months prior to his alleged death or alleged mistaken news of incarceration in Iraq, he had been placed on Treasury’s Specially Designated Persons list, under two other names.

This report notably stated that “Al-Qurashi was named the interim leader of the ISIS terrorist organization in 2019,” that “News reports from around the region say al-Qurashi was taken into custody Wednesday [20 May 2020] by the Iraqi military,” and that on 29 October 2019, Trump tweeted that he had “Just confirmed that Abu Bakr al-Baghdadi’s number one replacement has been terminated by American troops.”

So, was he killed by Trump regime illegals in Syria, in 2019? Or, if he was incarcerated by Iraqi military enforcement, back in 2020, who let him out of jail?

Or, is he simply a plug-in for a round of imperialist NATO news reporting, and a possible bump in Biden’s popularity, despite not previously being a headliner?

The Hollywood rhyming scene helps to reinforce imagining the imaginary as real.

NATO media is running with the backstory that was about seven hours behind the report of the Biden forces helicopter bombings of the Syrian village of Atmah, in Idlib.

This Syria News writer was about to hit the “publish” button, five hours ago, when the backstory broke into the media.

We include much of the original draft, to again provide evidence to our readership, of how warmongering media move into full lockstep, without questioning the statements of POTUS, the Department of ‘Defense,’ and the Dr. Strangelove’s occupied Pentagon:

According to SANA, among the thirteen massacred were six children and three women. According to Al Mayadeen, upon airdropping to the ground, the criminal Biden forces engaged in both, demands through loudspeakers that those able ambulate leave their homes, and a ground firefight with other terrorists. Mayadeen also reported that the British terrorist or the Iraqi terrorist or the Turkish terrorist (Abu Hussam al Britani, Abu Ubaidah al Iraqi, Omar Qardish al Turki), the American illegals were after, managed to escape from among the blown-up body parts. Various ‘activist sources’ claimed that the Brit terrorist was Tauqir Sharif — a rumor that spread so rapidly that the criminal posted a selfie video claiming he was still alive.

Mayadeen also reported that there were several injuries to illegal US troops, as they dropped to the Syrian ground to terrorize Syrians.

“US strikes in Syria may be lawful if Syria consents to the use of force in their territory.  If Syria does not consent, the strikes would violate international law, unless the US demonstrates that the strikes were taken in self-defense.”  — Sarah Knuckey, international lawyer and Professor at Columbia Law School

Though virtually all of the war criminal — yes, Virginia, journalists are indictable under Geneva Principle VI (a), (b), (c) — yellow journalists reported that the massacre took place in the early morning of Thursday, and cited Pentagon press liaison John Kirby, not one thought it curious that he would be putting out press releases in the middle of the night.

Syria News is a collaborative effort by two authors only, we end up most of the months paying from our pockets to maintain the site’s presence online, if you like our work and want us to remain online you can help by chipping in a couple of Euros/ Dollars or any other currency so we can meet our site’s costs on time; you can also donate with Cryptocurrencies through our donate page.
Thank you in advance.

Nor did one notice the oddity of the Department of Defense statement claiming the massacre to be “successful,” and without US military casualties, also claimed to have taken place on 2 February 2022, though released on the 3rd.

That the statement came from the DoD is another example of American exceptionalism and western supremacy: The Biden forces can not claim defense while simultaneously being invaders, occupiers, and war criminals.

Like the Trump and Obama regimes, the Biden forces have massacred another group of Syrians, within their homeland.

Biden’s schtick alleging that the “ISIS leader” — who may have died in 2019, who may have been jailed in 2020, the leader whose name was virtually unknown — has been taken off the battlefield, is an atrocious, smarmy cover for his war crimes in the Syrian Arab Republic.