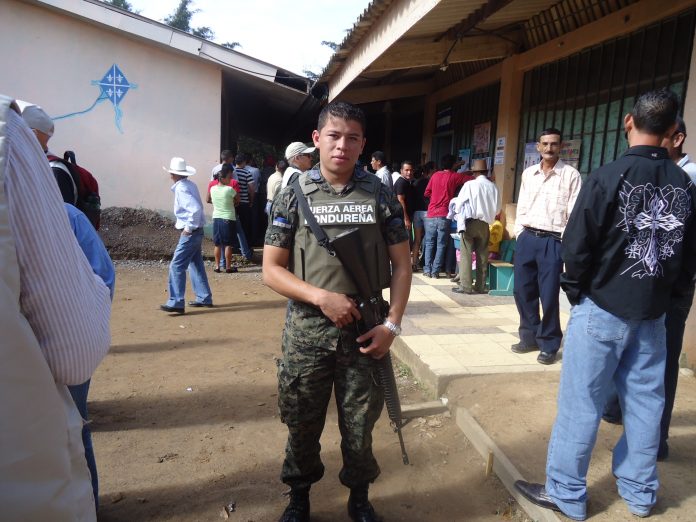 The fight for freedom in Honduras, where many citizens feel caged and shackled, is an uneven contest between the haves and the have-nots.

The United States, an ally of the transnational corporations that are pillaging this country,  has six military bases of occupation, as well as a network of destabilizing influences: a constellation of intersecting trajectories that  support the dictatorship of Juan Orlando  Hernandez, an outgrowth of the illegal 2009 military coup that overthrew the democratic government of Manuel Zelaya.

Canada, too, is enabling repression and persecution by recognizing the Honduran governance and by negotiating the corporate-empowering Canada-Honduras “free trade” agreement with Hernandez’s “Nacional” party.

Canadian indigenous leader Bob Lovelace reports that since Canada began negotiating the Canada-Honduras “trade agreement” in 2009, there have been 13 political disappearances and 200 political assassinations in Honduras.

A comprehensive list of political assassinations from May 2012 to Oct 19, 2013 is offered by Karen Spring  of the Rights Action group.

The narratives of current Honduran leaders who are fighting for freedom, and against corruption, offers a window into a murky world of murder and repression that has transformed this exotic setting into the “murder capital of the world.”

Jose Luis Baquedano, a political leader in the Libre party, occupies the seemingly unenviable position of Secretary General of the United Workers Confederation (CUTH).  He explains that he has already been the victim of assassination attempts, and that his house was burned down . Furthermore, he explains that his current job as Director of the General Council of CUTH is filling a void created by the murder of the previous Director. Impunity for murder is the rule, rather than the exception, in Honduras.

Flores and her family have already received very credible death threats — her colleague, Thomas Garcia, was killed — and she is at the top of a government “Kill List” which includes her lawyer.

More recently, her community suffered another threat.  Sources declared that after the (likely fraudulent) Nov. 24 Presidential elections, they will “get them all, dead or alive”.

Canada, with its “free trade” deal with Honduras, and its 75 mining concessions, has blood on its hands. The current regime of oppression is being reinforced, and the Honduran peoples’ collective shackling is being entrenched by a repressive regime and an asymmetrical economy.

Honduras is quickly becoming a neo-colonial appendage of the increasingly global corporatocracy that is imposing itself on the world behind the subterfuge of secretive “free trade” deals.

Colonialism and freedom do not walk “hand in hand”. We are all complicit in these crimes against humanity.