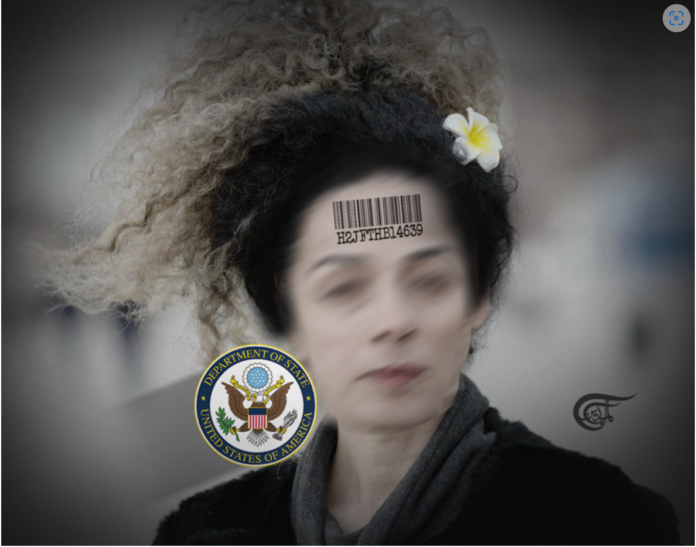 The largest color revolution attempt in recent Iranian history is led by a woman on Washington’s payroll – and we have the facts.

There are Iranian women, though a minority, who are not in favor of the mandatory veil – a legitimate grievance, an opinionated dissatisfaction to which humankind is entitled. And then there are people leading a fraudulent anti-hijab movement with a barrel aimed at Tehran.

“I’m leading this movement,” Alinejad, 46, told The New Yorker on Saturday. “The Iranian regime will be brought down by women. I believe this.”

Operating from an FBI safehouse, Alinejad has been living in the US for the past decade working as a full-timer for VOA Persia – or, Voice of America, Persia – Washington’s propaganda mouthpiece funded directly by the Broadcasting Board of Governors (BBG), a soft power arm of the empire fully funded by US Congress, made to capitalize on harmful narratives in favor of Washington’s corporatocracy.

Alinejad’s tasks are quite a few: To take cozy photographs with the world’s most effective pro-war politicians who’ve only done everything to wipe out West Asia, such as Mike “We lied, we cheated, we stole” Pompeo, and Madeleine “The price is worth it [to kill Iraqi children]” Albright. 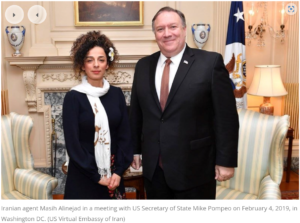 But, that’s not all. Between 2015 and 2022, the US Agency for Global Media paid Alinejad over $628,000 to harass veiled women, spew propaganda, and demand more sanctions against her country (not a very patriotic thing to do). Alinejad has been doing everything in her media power to isolate her country, attempting to render it a pariah state banned from all diplomatic, economic and political privileges in the global arena. Indeed, a champion for imperialism, Alinejad is on a fat CIA payroll to incite violence and lies. 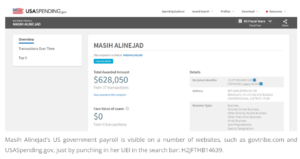 The latest narrative exploited by Alinejad is as such: 22-year-old Mahsa Amini, in a CCTV footage, gets in a verbal dispute with a female police officer over the way she had her hijab wrapped around her head. There is no escalation for the dispute; the woman leaves the girl alone and walks away. In a matter of seconds, the young woman freezes, bends, and falls over a chair to which bystanders ran to attend. The girl, who had underwent an open brain surgery in 2006, sustained a heart attack which put her in a coma. Two days later, she was announced dead, after which Western tabloids accused Iranian police of beating Amini to death, leading to the riots.

Admitting to lead the riots against the government is only a statement. Her tweets further expose her agenda – the transfer in narrative from one tweet to the next is baffling.

On September 14, the day Amini suffered a heart attack, Alinejad made no mention of beating or violence. She wrote on Twitter: “Amini suffers heart attack after being arrested by morality police.”

On September 15, the CIA asset ramps up the rhetoric a notch: “This woman is in a coma because morality police savagely arrest her.” Still, no mention of abuse, beatings or physical violence.

Between that tweet and a comment, Alinejad caters to her bosses: “Amini is in a coma after being beaten by morality police.”

On September 16, the day the young woman was announced dead, Alinejad launched a hashtag which she had been paving fertile grounds for: “#MahsaWasMurdered by the Islamic Republic’s hijab police in Iran.”

Washington’s lackeys were at work too: One of the first to accuse the police of beating Amini was Maziar Bahari-founded IranWire. Bahari is an anti-Tehran Iranian exile who has admitted to “covering illegal demonstrations” and “helped promote color revolutions” in Iran. An empire asset.

The second Twitter post which propagated the false narrative was from Babak Taghvaee, a double-agent exile accused of disseminating sensitive information to the CIA and Mossad; a military contributor to Israel Hayom, Pentagon research reports, and US State Department-funded Radio Free Asia/Radio Liberty, which is also on a BBG payroll.

With the hundreds of fake accounts which trended the matter on social media, the tweets gained massive momentum, and riots were immediately stirred up. Terrorist groups among the crowds were detected and arrested carrying sharp weapons and explosives, killings were carried out with the aim to blame on the government, and rioters burned banks and other irrelevant state institutions, creating chaos. The MEK, mind you, has been a terrorist organization in the US until being delisted in 2014 – the year Alinejad made her way to the US. Now, tabloids pair “freedom-loving Iranians” with MEK supporters and organizers.

Washington for long has tried to mobilize Iranians against their government, either through media propaganda, or through sanctions. The chaos brewing is a dream come true for Alinejad, a byproduct of over decades of work. A Wikileaks cable from 2009 sent to the US State Department wrote about a dissatisfied Alinejad complaining of a “lack of cohesion among reformists” which was impeding Washington’s plans and interests.

Global media, Hillary Clinton, Regime-change Soros’ Open Society Foundation, and the NED have all simultaneously bandwagoned on the campaign, shedding crocodile tears on Iranian women. Mind you, these entities have projected, enabled and funded the most brutal, patriarchal policies against women around the world, including in the United States. There was no regard for Palestinian, Yemeni, Iraqi, Libyan or Syrian women when the US either bombed or funded weaponry to bomb societies back into the Stone Age. Washington funds the most repressive entity in West Asia today, “Israel,” whose system bases itself on racism, rape and uprooting.

Not to mention the sanctions which Alinejad has repeatedly called for to be implemented against Iran, as she “believes” they work. Sanctions have affected the lifestyles of many Iranian women, impeding them from their right to sanitation, securing quality nutrition and health for their children, and utilizing resources for healthy living. Not so feminist, is it?

The hijab is a democratically voted and a legitimatized law

Perhaps Big Media’s abuse of freedom is not leaving any space for us to investigate. Facts, when conveyed effectively, are an angry mass’ greatest sedative: After Shah Mohammad Reza Pahlavi’s government was toppled in 1979, revolution leader Imam Khomeini held a nationwide referendum on which people voted whether or not they advocated for Iran to be ruled by an Islamic constitution. Within this context, Iranian women integrated the hijab into the constitution, and Iranian women have the right to revoke it if they wanted to. The law is a democratic decision made by the people and the women of Iran. Hence, the legitimacy of the law is still intact.

The popular support for the law was reiterated in a 2014 national poll which collected data from all provinces across the country, holding the question of whether they agree that the mandatory hijab should be implemented on Iranian women even if they do not agree with it. Around 19% of the population completely agreed, 35% simply agreed, and 25% were neutral.

In 2021, Iranian deputy speaker of the parliament Ali Motahhari suggested another referendum on the veil be conducted when protests again were on the rise, exhibiting the democratic values which the state holds, as opposed to what the West paints the country to be – a clerical wasteland dictatorship.

So the question here is: What is there to fight for when Iranian women themselves are in favor of the hijab by popular referendum and demonstration? Do the West and its blinded followers want to save Iranian women from themselves?

For a population widely familiar with Edward Said’s Orientalism, this projection could be quite embarrassing.

The infiltration and disruption of a society

In 2002, former Israeli PM Benjamin Netanyahu held a two-hour-and-a-half-hour conference just before George Bush announced his invasion of Iraq, in which he called on the United States to foment regime change in Iran (and Iraq, obviously), offering an explanation on how to dismantle the anti-imperialist social fabric in the country. In his vision, Fox Broadcasting would air “Beverly Hills 90210” and “Melrose Place” to Iranians through their televisions. “This is pretty subversive stuff,” he remarked. “The kids of Iran would want the nice clothes they see on those shows. They would want the swimming pools and fancy lifestyles.”

The current riots in Iran are not an event suspended in time, but rather a continuation of years of disruption attempts by people like Alinejad and Netanyahu. The very social fabric of the country is what kicked out Western greed in 1979; a fabric largely built on cultural affluence and appreciation for tradition brewed over the course of centuries. To shift that fabric would entail transforming the material conditions. Hedonism, pleasure and materialism are weapons in a toolbox used to dumb down communities into virtual enslavement.

Hollywood has proved itself as one of the best tools to redefine the values of freedom, so effective that even Arab media have been throwing Western cultural projections onto Iranian women, who are largely supportive of the mandatory veil.

Hearts may be in the right direction, but not in the right place. Activists on social media have taken to advocate for the “autonomy” of Iranian women (according to their standards and terms), regardless that it may not be consistent with the nature of their state or society.

If we truly want to help and support Iranian women, we must first bring our cultural projections to consciousness – Are we truly supporting their struggle, or are we telling them how they should live their lives? For a society which is proud and emotionally attached to its culture, are we doing justice by following governmental-funded tabloids attempting to dismantle the very fabric of an anti-imperialist society which has evolved so progressively?

There isn’t much predictability about when the fog of propaganda would clear up so we could perceive matters free of the manufactured anger that the media has managed to muster from millions.

See next: What is happening in Iran?

ICU nurse: “You’re being lied to about COVID”