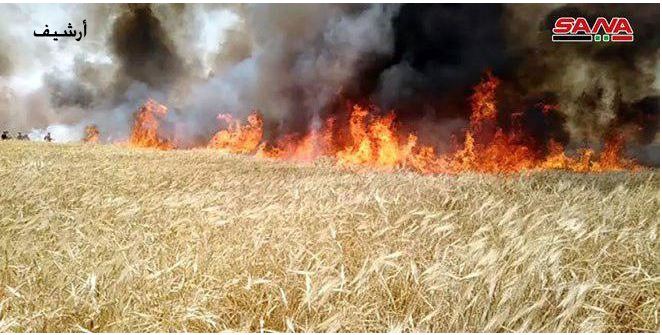 HASAKA, (ST)_ The fires that broke out in agricultural lands in Ras Al-Ayn region  in Hasaka province have roughly damaged  1000 dunums planted with wheat  and have caused the burning of residents’ homes . Local sources were quoted by the Syrian News Agency (SANA) as saying that the fire broke out in an agricultural land in Kherbet al-Banat town to the west of Ras Al-Ayn region near the Syrian-Turkish border. “The fire extended to nearby wheat field and damaged roughly 1000 dunums and burned several homes in Qatof and Tal Dyab towns,” the sources said, citng that the Turkish regime’s forces were behind most of the fires that erupted in the region. Around 10.000 hectares of wheat and 6250 hectares of barely , most of them located in Turkish-occupied areas in the western countryside of Hasaka were damaged.

Empire Looting and Pillaging and Committing War Crimes as Policy