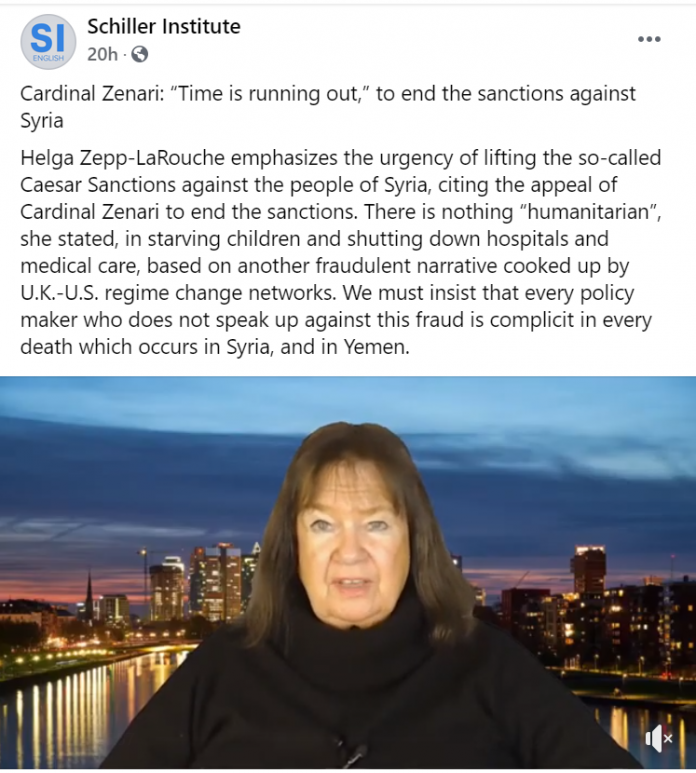 But I want to respond to a very urgent call by the Catholic Cardinal, Mario Zenari from Syria. He has issued a couple of days ago a call to the world to come to the help of the Syrian population. He says that more than 90 percent of the Syrian population are under the level of extreme poverty, that they are in danger of losing their lives because of famine, and that the 10 years of the war, the sanctions, the pandemic has created a situation where the suffering of the Syrian population has become absolutely intolerable.

And I want to ask all of you, our viewers also to watch a documentary which has been produced by the head of the World Food Program, David Beasley, in which he has a 40 minute documentary, which is extremely difficult to watch. But I want you to watch it because it shows that Yemen, which is practically in the similar situation like Syria, that children are dying. And Beazley said that they were dying in front of his eyes in the hospital and he couldn’t do anything about it because there were no materials to change it.

This situation cries out. So forget about politics. I mean, just look at it from the standpoint of that. There are two people and there are unfortunately a couple of more. But let’s look at Syria and Yemen. We are the result of the so-called humanitarian interventionist wars. I mean, what’s humanitarian about this? I mean, the narrative about it is that the Syrian government would have committed all of these crimes. But we know that that is not true.

Colonel Black said very clearly that the plan to have regime change in Syria was made by the Pentagon about 10 years before the destabilization happened in 2011. And we know that was the policy of regime change for the entire region Afghanistan, Iraq, Iran, Syria, Libya.

So the narrative about how this war happened is completely wrong.

But even leaving that aside, leaving aside the fact that are in a political struggle between the different Arab countries, why a certain Arab countries supported this false material of the season. Let’s start with the humanitarian situation. When you have a people about to die and the world is doing absolutely nothing, that means the people who are watching that are morally unfit to survive. And I am crying out to you and to help us to make a mobilization because we have to get rid of this, Caesar’s  act, and there has to be an immediate reconstruction of Syria.

The so-called donor’s conference, which just took place in Brussels a couple of weeks ago, was a complete charade because it collected a few billions of dollars. But they will not go to the central government in Syria. They will go to the neighboring countries who have taken refugees. They will go to some opposition groups and NGOs, but they will explicitly not go for the reconstruction of Syria. And what coordinated scenario has made emphatically clear, he says, without a reconstruction, that is not going to be any end of this misery because, you know, it’s not just giving food and medicine, which is urgent right now.

But unless you rebuild the country, which is in rubble field, then there is no solution. And he said peaceful development is what is the only way out. So it would be very easy. We have from the Schiller Institute worked for, you know, almost half a century on plans how to develop Southwest Asia. The first was my husband in seventy five, and he proposed the Oasis plan. And then in the recent period, we have worked out a plan for Yemen called the Phoenix Plan, a plan for Syria called the Phoenix Plan.

And all of that could be implemented in the context of reconstructing Southwest Asia, in which the bed and Hold initiative, the new Silk Road involving all the countries of the region and ending this misery. So I really think this let me just say one last thing on this Caesar’s Act. This is a lie.

This was manufactured photographs showing supposedly the tortures of the Assad regime, but, you know, it’s for the vast majority, it’s pictures of Syrian soldiers who were killed by al-Qaeda. We have seen these kinds of applications again and again. Remember the babies who were supposedly ripped out of the incubator by Saddam Hussein in the first and the first US attack against Iraq? Then we had the so-called yellow cake, which turned out to be a lie, the so-called weapons of mass destruction, which did not exist.

Then we had the lies by the White Helmets about the so-called use of chemical weapons, which was a false flag operation. So this has to stop and the US Caesar Act should be lifted. And other congressmen who are not lifting it make themselves complicit in every death which is occurring in this region. I really want to put it in these stark terms, because, you know, this has reached a point where either the world wakes up and we start to remedy this or we will not survive because of our own moral failure as a human species.

So I call on you to work with the Schiller Institute… would work with the Committee of Coincidence of Opposites, which is our our aim to to help to try to get aid programs and reconstruction.

So I appeal to you, get in contact with us and respond to the call of Cardinal Zenari, which has not been covered much at all by the Western press. And that alone should tell you the one sidedness of the media coverage, which we have to overcome.